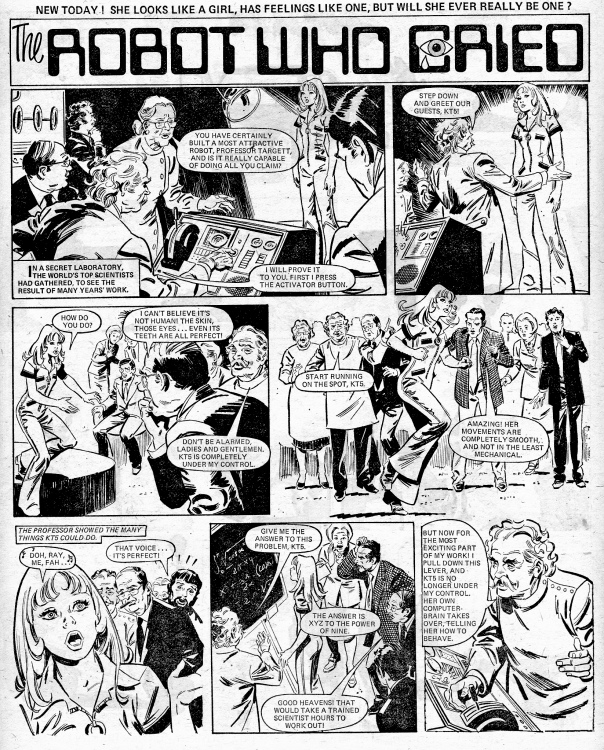 In a secret laboratory, a robot is shown to the scientific community – a robot who looks exactly like a human girl, and who can at the tug of a lever be given her own free will. What does she do with this free will? Why, escape her creator and find out what it means to be human. For some reason this seems to mean crying a lot – with the notable exception of sniffling sorrow, most human emotions are beyond her grasp (it is not until the last panel that she finally learns to smile with joy). During this equivalent of a coming of age story robot KT5 (in her human identity as Katy Fife) learns to care for others and to sacrifice herself before she can be given the ultimate gift of a real human family and a life as a real girl. You could hardly wish for a clearer example of a Pinocchio story.

1977’s The Robot Who Cried shows a lot of similarities with the 1979 story Almost Human. Both have undoubted references to popular media of the time: the clearest link here is the tracksuit nod to the Six Million Dollar Man’s outfit, as like him KT5 is a product of the lab. Again like Almost Human, the super-strong, super-intelligent, not-actually-human protagonist is on the run with a secret that she must keep from her new friends, even when lives are at stake – her own included. What happened in the editorial departments when discussing this sort of thing: did the commissioning minds think that their young readers wouldn’t mind repetition of the same themes over again (certainly I don’t remember minding), and/or did they try to mask it a little by using different artists, I wonder?

The artist in this case is Rodrigo Comos, an old hand who illustrated The Haunting of Form 2B from the earliest issues of Jinty. Fittingly, his female characters are often a little teary or prone to sobbing, though he also does a good line in angry snapping eyes. Some of the charm of the story to a grown-up eye has to be attributed to the outright silliness of some of the set-up: KT5 can sing divinely, she can solve a complex equation “that would take a trained scientist hours to work out” (an entirely made-up equation that she answers with “XYZ to the power of nine” – surely she must just be taking the piss here?). And she can also… serve tea and buns on a hostess trolley? Clearly a robot in the thrall of the patriarchy!