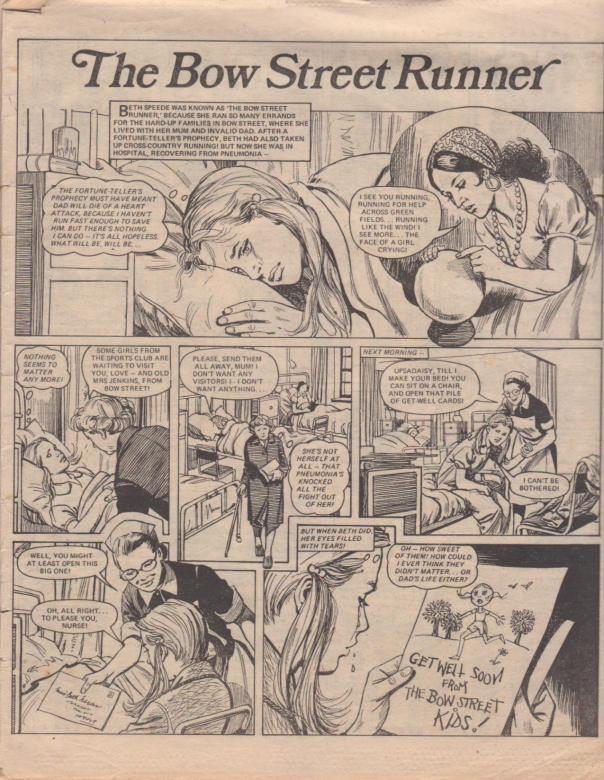 The Bow Street Runner holds a particular place in Jinty history for being the only Jinty serial (besides Pam of Pond Hill and Gypsy Rose, which were regulars) to continue in Tammy & Jinty. It is also where long-running Jinty artist Phil Townsend crosses over from the Jinty team to the Tammy team.

Beth Speede, as her name suggests, has a talent for running. In Bow Street, where she lives, she is known as the Bow Street Runner because she uses her speed to run errands for the residents, most of whom are elderly and invalid. Among them is Beth’s own father, who suffers from a heart condition. This means he can’t get a good job. Mum can’t either because she is lame. So the Speedes, like everyone else in Bow Street, are a poor lot. Still, Bow Street may be a poor and rundown street – which gets it threatened with demolition at one point – but it is home to everyone who lives there. They are a close knit community bound together by Beth the Bow Street Runner. The street would fall down without her, and her invalid parents wouldn’t survive without her either. Quite literally, in fact – it is the Bow Street Runner herself who saves Bow Street from demolition. The street gets modernised instead.

But Beth is soon putting her talent to far more serious uses when she receives a prophecy from a fortune teller: “I see you running for help across green fields…I see the face of a girl crying.” Beth is completely terrified by this prophecy. She takes it to mean she is running to get help for her sick father, and the girl crying is herself – crying because she failed. So she takes up cross country running to increase her speed, in the hope that she will outrace the prophecy and save her father.

However, there is a cross country championship and trophy that is also at stake. So naturally, Beth, like any other heroine of a sports serial, finds herself up against an enemy who makes constant trouble for her. In Beth’s case it is Louise Dunn, a rich snobby girl (and nose to match) who has been promised a pony if she wins the championship. Louise’s tricks include tying knots in Beth’s shoelaces, getting her suspended from the sports club, and interfering with the markers. And it gets even worse when Louise finds out about the prophecy and starts using it against Beth.

Stories about poor girls who work to rise above (or work with) their poverty are always popular. And readers love stories about girls who find a talent but face all sorts of adversity – largely in the form of a spiteful enemy – in using it to prove themselves and triumph at the end of the story. “Tears of a Clown“, “Minnow”, “Concrete Surfer”, and “A Dream for Yvonne” are just some of the Jinty stories with this theme.

However, what should be the greatest strength that carries this story is instead the weakness that lets the whole story down – the prophecy. Sorry, but you can tell a mile off that Beth has got it wrong. The prophecy is just too vague, wide open to other interpretations, and Beth’s interpretation of it is just so stretched and forced that you can’t really understand how on earth she can come to that conclusion. For the prophecy to work, it should take the form of a riddle with double meanings. Beth (and the reader) takes what appears to be the most obvious meaning. Then Beth (and the reader) is taken by surprise when it turns out that the prophecy had an entirely different meaning. Jinty had the right effect in “Cursed to be a Coward!” Here the heroine receives a prophecy that says: “You will end in blue water.” The heroine takes this to mean she will drown, and becomes terrified of water. But it turns out the prophecy is referring to an actual name – Blue Water – the name of her new house boat. But in “The Bow Street Runner” the prophecy menace does not work, and it comes to absolutely nobody’s surprise when Beth finds she has got the prophecy wrong. The prophecy meant running for help for Louise, who had an accident during the championship run. And the girl crying is a deeply remorseful Louise. So it has to be said that this story is not as good as it should have been because the prophecy looks like it has been badly thought through.

Oh yes, Beth wins the championship and becomes the pride of Bow Street. Louise’s dad builds the Speede family a bungalow at the top of Bow Street as a reward. But Beth is very happy to remain the Bow Street Runner.