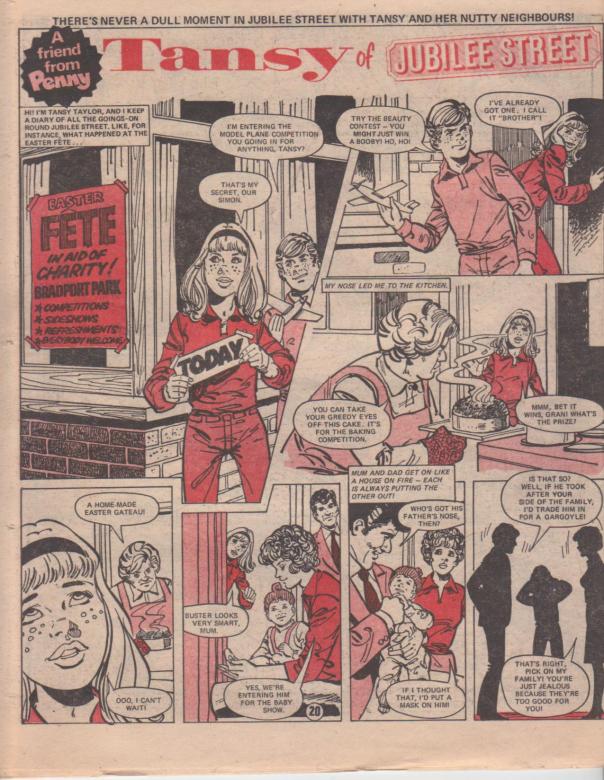 When a comic merges with another, strong regulars are vital if the influence of that merging comic is going to last long after the comic itself fades. The Storyteller, Bessie Bunter and Wee Sue bear witness to that; the first two survived two merges and they lasted in Tammy for years after the comics they came from had long since faded after merging with Tammy. And such is the case with Tansy of Jubilee Street. Tansy was Penny’s star regular, and she was strong enough to not only keep going right up until the last issue of Jinty but make her presence felt in the Old Friends slot on the Tammy & Jinty merger, which she shared with Molly Mills, Wee Sue and Bessie Bunter.

Tansy Taylor keeps a diary of the goings-on in Jubilee Street where she lives, and her school and home. These include sibling rivalry with her brother Simon, which gets even worse when Simon pairs up with his friend Peter Saint. Despite his name, Peter is infamous for his practical jokes, and Tansy always seems to fall victim to them, no matter how wary she is. Sometimes Tansy and Simon do team up, particularly against their father who can be severe. Most of the time, however, they are constantly battling, much to the consternation of their parents and the amusement of readers.

Other stories centre around Tansy’s interactions with the nutty but colourful people who live in Jubilee Street. There is Mrs spick-and-span Spickle, the house-proud neighbour who never does anything but housecleaning and is obsessed with cleanliness. Another character obsessed with cleanliness is Dr Grimshaw, who over-uses his ever-present germ spray. Mr Grady, the deaf man, who always raises an unintentional laugh through constantly mishearing what you are saying. Mr Court runs the store in Jubilee Street – but he hates customers and is always coming up with tricks to drive them off. As Tansy demonstrates over and over, if you want service out of Mr Court you have to trick it out of him. Most of the time she pulls it off, and gives us more laughs. But when you don’t want to buy something, Mr Court is as friendly as can be. Other regulars include Deidre “Dismal Dee”, a pessimist who loves nothing better than to look on the gloomy side, and Angela Honeyball, the school snob. Angela is the nearest thing Tansy has to a nemesis, for Angela’s snobbery and scheming causes constant clashing between them.

As Tansy uses a diary to record the goings-on in Jubilee Street, it is appropriate that her very first and last stories should centre on her diary. In her first Penny story, Tansy loses her diary and gets into all sorts of scrapes while trying to find it. Her final story in the last Jinty issue pays homage to her first, where Tansy reflects on how she lost her diary then. And then she discovers the diary has gone missing again. She gets into more scrapes and her imagination is filled with terrifying thoughts of what could happen what some people might do if they find the diary. Tansy is relieved to find her mother just put the diary away for safekeeping while re-lining the drawer. Tansy then gives the first mention of the Tammy & Jinty merger by telling Jinty readers to note it in their diaries.