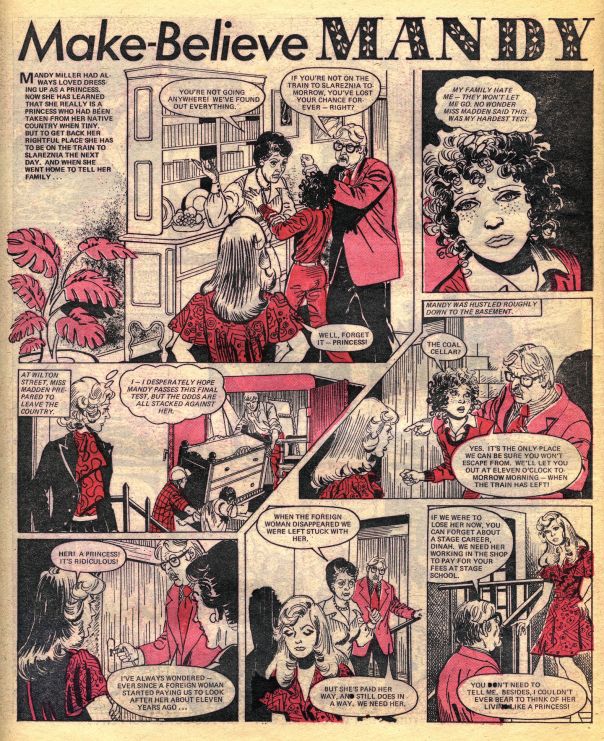 At any rate, the case of the first Jinty, the slave story was “Merry at Misery House”, the friendship story was “Angela’s Angels” – and the Cinderella story was “Make-Believe Mandy”. Mandy was the first Jinty story drawn by Ana Rodriguez, who would be a regular on the Jinty team for the next two years.

Mandy is the Cinderella of the Miller household. The parents make her do all the housework and slave in their second hand clothes shop while they devote all their attention and money on their spoiled daughter Dinah. The parents send Dinah to a posh stage school and even hire a hall for her birthday. Mandy takes refuge in dress-up and fantasy, and particularly loves to act as a princess.

The Millers exclude Mandy from Dinah’s birthday celebrations, calling her plain, ugly, useless and not fit to be seen with Dinah. Poor Mandy is starting to believe it herself, but tries to go to the party anyway. But when she arrives, the parents tell her that they didn’t want her and to go away. Dad throws Mandy’s present for Dinah on the ground while Dinah says, “D’you think I want my friends to see what an ugly sister I’ve got?” Mandy now realises her family hate her, and she has no idea why. A mystery to be solved and to hook the readers in even further!

Earlier that evening Dad had seen an advert for an audition for a princess in an amateur play, with all applicants receiving 50p. Now that is a bit weird, isn’t it? Dad threw the paper aside while Dinah scorned such a lowly role. But when Mandy comes home, she finds the advert and decides to have a go, despite how the Millers’ taunts erode her self-confidence. After all, a princess is her favourite fantasy. What nobody realises is that the advert has a connection with the reason for the Millers’ hatred of Mandy.

The Millers hate Mandy even more when she passes the audition (which was as weird as the advert, and Mandy thinks it was a setup). If there is one thing they cannot stand, it is Mandy scoring one over Dinah, and they get more nasty than usual whenever she does. This becomes a critical plot point when Dad cottons on to what is going on here.

Ah, so there is more to the audition than an amateur play? Oh, yes. The producer, Miss Madden, promises Dinah a better life if she passes a series of tests. These tests are a test of character – testing honesty, kindness, loyalty, self-sacrifice, courage and other virtues. What have these got to do with the play? Nothing at all – it is obvious this has more to do with the reason the Millers hate Mandy. The first clue we get is when Miss Madden establishes that there is only a three month age difference between Mandy and Dinah, so how can they be sisters? Aha! So Mandy is not related to the Millers by blood, eh?

Eventually, Dad guesses Miss Madden’s motives. He does not explain what he suspects, but he wangles it for Dinah to go for the audition as well in the hope that she will grab what he thinks Miss Madden has in store for Mandy. He also makes a point of not letting Miss Madden know which girl is his real daughter – hmmm … now, that’s interesting! They also start pretending to be nice to Mandy. But of course the selfish, spoiled Dinah cannot pass the tests of virtue. When Dad finds out he is furious. He tells Dinah that she has thrown away the chance of a lifetime and given it straight to Mandy.

What does he mean? Miss Madden tells Mandy the story of the princess of Slareznia, who was smuggled out of the country when a revolution broke out. A governess brought the princess to England, but then they disappeared. Miss Madden and her agents have been trying to trace the princess and bring her back to Slareznia … yes, Mandy is a real princess! The governess left the princess with the Millers and paid for her upkeep, but evidently made a bad choice of guardians to take care of the princess. Then she vanished, leaving the Millers feeling stuck with Mandy. The whole audition setup had been to find the princess and then determine which of the Miller girls was her. Miss Madden has one last test for Mandy – be on the train to Slareznia departing from Victoria Station. She warns that it will be Mandy’s hardest test.

And she isn’t kidding. As said before, the Millers absolutely hate it when Mandy scores one over Dinah, so seeing Mandy on her throne will be the ultimate insult for them and their spoiled daughter. Moreover, they need Mandy in the shop to pay for Dinah’s stage school fees. So they lock her in the coal cellar to make her miss the train. Mandy struggles to get out through the coal chute. It looks impossible, and Mandy even knocks herself out doing so. But eventually she succeeds – something she didn’t think she could do – and makes a mad dash for the station, dodging the Millers who try to stop her. She scrambles on the train just as it is departing, passing the test that seemed impossible, and Miss Madden starts courting her with royal honours. As the train travels on, it passes by the Millers’ house and its sour-faced occupants.

Cinderella is a fairy tale, and this Cinderella-based strip is far more fairy tale than Cinderella-based strips usually are. Usually, it is some talent the heroine has, or long-lost relative, or some kind person that becomes an adoptive parent that rescues the heroine from her drudgery with her cruel guardians. But this one is more the stuff that fairy tales are made of, with the heroine turning out to be a real princess, and a series of trials that the good sister passes because she is virtuous, and the bad sister does not because she is spoiled and horrid. The ‘series of trials’ element would be used in another of Jinty’s Cinderella stories, “The Valley of Shining Mist”, in 1975. In that strip it looks even more like a fairy tale because it seems there is real magic at work.

The methods Miss Madden uses to determine which girl is the princess do come across as a bit bizarre, convoluted and contrived. And it all depended on whether or not Mandy would go for the audition, and then stick with Miss Madden once she found there was no play but some weird setup with no explanation. Surely Miss Madden could have worked out something much more credible and simple to find the princess?

On the other hand, it all added to the mystery element – why the Millers hate Mandy – which is another reason readers would have kept reading. Mystery stories were always popular in girls’ comics. The hatred the Millers have for Mandy, and the mystery about the reason for it, add a further level of drama and thrills to the story. Usually the motives of the guardians have in exploiting the heroine are plain to see (cheap labour, greed, laziness, cruel personalities) and are not part of the plot development. But in this story they are, which makes the story a bit different to other Cinderella-based strips, where the story development focuses exclusively on surviving and escaping the drudgery. It also makes the Millers slightly more three-dimensional villains than most cruel guardians in a Cinderella-based strip, who do it just because they are nasty, greedy, and favour their spoiled daughter (if there is one). Eventually, it turns out that this is why the Millers treat Mandy so badly too, but there is more background and edge to it than most.