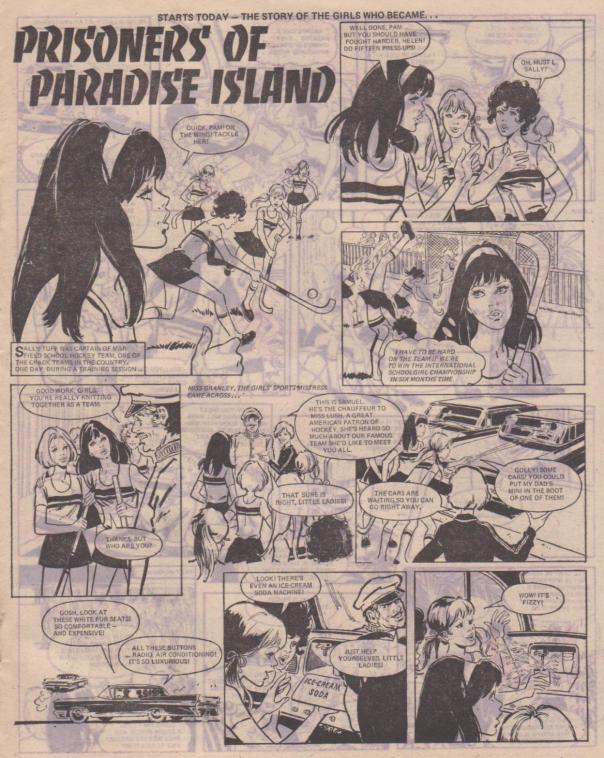 Special note: this was the first Jinty story to feature the artwork of Trini Tinturé.

Sally Tuff is captain of Marfield School hockey team. Tuff is her name, and tough is her training of the team, because they are to compete in the international schoolgirl championship in six months’ time. But then Miss Louise Lush, an American patron of hockey and her chauffeur Samuel turn up and take the girls for a ride in their limousine. There they kidnap the girls – by using ice-cream soda that floods the limousine and renders them all unconscious.

When the girls come to, they are prisoners on Paradise Island. The cage is a gilded one. It is a tropical paradise of an island filled with every luxury you can imagine – plush apartments, rich food, entertainments, and facilities where you can indulge yourself and idle time away. To Sally’s horror, the girls immediately forget they have been kidnapped and rush to enjoy themselves. Miss Lush promises to turn them into the greatest hockey team ever – but looks strangely pleased when the girls fail at a hockey match miserably because all those luxuries they were enjoying the previous night have left them in no fit shape.

So Sally sets out to fight Miss Lush and bring the girls to their senses. She tries all sorts of tactics, including strong arm tactics to pull the girls away from all their luxuries, refusing the rich food, throwing all the rich food on the floor, setting deliberately bad examples, and trying to escape. She endures punishments from Miss Lush, such as being put in a punishment cell with rich food to tempt her. But none of Sally’s tactics succeed. The girls are completely hooked on all their luxuries, losing their hockey form, and not realising how fat and unfit they are getting. What’s more, nobody knows about their kidnapping, and they are trapped on an island with no apparent means to get off.

Eventually, however, Miss Granley tells Sally that she was just fooling Miss Lush. She knows what is going on and is really on Sally’s side. Unfortunately Miss Lush overhears them. She takes them both to a quicksand spot and threatens to throw Miss Granley in it if Sally does not stop her resistance. Sally sees no choice but to do so.

But just then the fat and pampered girls arrive. Although they are unfit, they do a good job of lashing out at the crooks with their hockey sticks. They saw everything from the balcony and now realise what Miss Lush has been doing. The authorities also arrive, and soon Miss Lush and her cronies are in custody. The girls eagerly go for the training to get them back into shape.

The championship is hard going, but Marfield wins. Sally says they have earned the holiday Miss Granley promised. But Sally also promises them it will not be anywhere like Paradise Island.

This is certainly a slave story with a difference. Instead of some grim factory or institution, the prison is a beautiful tropical island. Instead of beatings, starvation, overwork and other sadisms, the treatment is nothing but pampering and every luxury laid on thick. Yet underneath it all, it is just as cruel and profiteering as any of the harsh institutions and rackets that make up the bulk of the slave stories because of Miss Lush’s purpose for all the pampering. However, it is so easy to be blinded by it all because it is full of lavishness and temptation – unless you’re like Sally and you have a more level head. This story certainly has a strong message about temptation and not letting things go for the sake of easy living.

There is also a comic element to it all, from both Miss Lush’s deliberate pampering and Sally’s attempt to resist it – such as Sally throwing a creamy cake in Samuel’s face. But it is black comedy. You can never escape the sheer insidiousness of it all. The story makes a disturbing point that the gilded cage is perhaps the most dangerous type of prison of all. It is easy to see what a prison looks like when it looks like a prison. But when it looks like paradise, you can forget who you are and get completely lost in it all. You never escape because you do not want to – unless you realise what it really is.