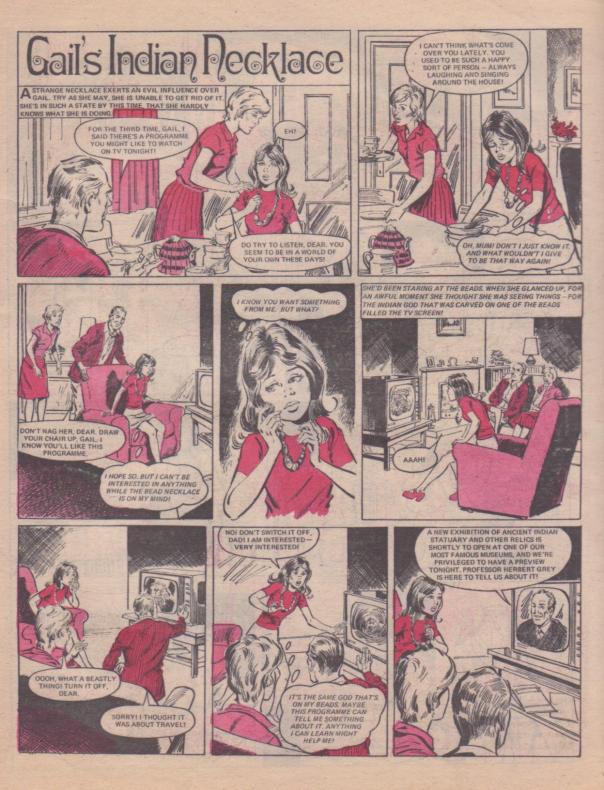 A popular theme in girls’ comics is the evil influence story. The story where an evil object, spirit, spell or person has the protagonist in its power and forces her to do things against her will. She may start turning nasty, do destructive things against people, or start behaving in bizarre ways, and keeps getting into tons of trouble that she cannot explain. She may be aware of what is going on, or she may have no idea until something tips her off. The question of how to free herself from the power usually depends on how malignant the force really is. If it is outright evil, it is usually a matter of destroying or depowering it. If it is more an angry force (or sometimes, in the case of a person, misguided) than evil, the usual solution is to make peace with it.

Gail’s Indian Necklace was the evil influence story from Jinty’s first lineup of stories. The Indian necklace is an ancient one that Miss Evans’s grandfather brought back from India. Miss Evans has kept it locked away in a brass box because she knows it is evil. But what if someone who does not know that opens the box someday? And of course this is precisely what happens after Miss Evans dies and her stuff is taken to a bring-and-buy sale.

The necklace ends up in the possession of Gail, who had been frustrated in her desire to buy a bicycle at the sale – her friend Marion beat her to it. The necklace takes effect, and its influence has Gail stealing the bicycle and riding off with it. The influence fades, and Gail is bewildered as to what came over her – surely it could not have been the necklace, she thinks? Later, she starts adoring her necklace, not realising it is glowing, and she is getting drowsy from the scent of saffron and sandalwood. But it does not take Gail long to catch on. The necklace has her doing things like stealing money to run away to India. When the necklace gets broken on the train, she gets demented in the hunt for the beads and gets thrown off the train. The necklace also seems to have other evil powers – for example, when her aunt gets run over in the street, she feels the necklace caused it. But she feels responsible because she willed her aunt out of the way for a while.

But there is always a solution in the evil influence story, and Gail finds it in a television broadcast. A museum exhibition is featuring an idol of an Indian god named Anak-Har-Li. Gail immediately realises that the idol has the same face as a bead on her necklace. She learns that the idol is minus his necklace, which was stolen 150 years ago by white explorers (hmm, hope Miss Evans’ grandfather was not among them!). There are even studs on the idol’s neck that indicate where the necklace should be. So the answer is to return the necklace to the idol? Yes, the idol makes that very plain when it tells Gail to return the necklace, or its curse will fall on her head.

Returning the necklace does not exactly go without a hitch. For example, this is where the aunt’s accident occurs because her presence will interfere with Gail’s mission. It gets worse when she having to sneak in (via a catering job), but sends off alarms and nearly gets caught by guards. But of course the necklace’s magic helps her in completing her mission and then getting out. Next morning, the museum authorities are surprised but delighted to see the necklace on the idol.

And there is a surprise for Gail too – a bicycle! Recalling that the arrival of the necklace in her life coincided with her disappointment in failing to buy the other bicycle, she believes that this is Anak-Har-Li’s way of expressing his gratitude. Ah, so Anak-Har-Li can be a decent god when you are on the right side of him!

It is certainly fortunate for Gail that the force that possessed her was not an outright evil one – just an angry one that wanted to get back to its rightful owner. Even more fortunate, it seems that Anak-Har-Li was not an evil god (despite his grotesque, frightening appearance) and was capable of doing good, such as the gift of the bicycle at the end of the story. Some of the trouble was indirectly caused by Gail, with the necklace acting on her desires – such as her desire to have the bicycle – rather than using her as a tool for evil. It is surprisingly that some of the necklace’s powers prove to be more beneficial, such as the bead that enables the wearer to read minds. It makes the serial a more layered and interesting evil influence story.

One does have to wonder – if Anak-Har-Li was capable of doing all those more malignant things to Gail to get her to return the necklace, why did he not do the same with the thieves who stole his necklace, or Miss Evans or her grandfather? Then again, maybe he did, and that was how Miss Evans came to lock the necklace away.

Incidentally, the title is one of the titles in girls’ comics that is not alliterative à la “Merry at Misery House” or “Gwen’s Stolen Glory”. However, it sounds a bit boring and nondescriptive. Couldn’t they come up with something more exciting?