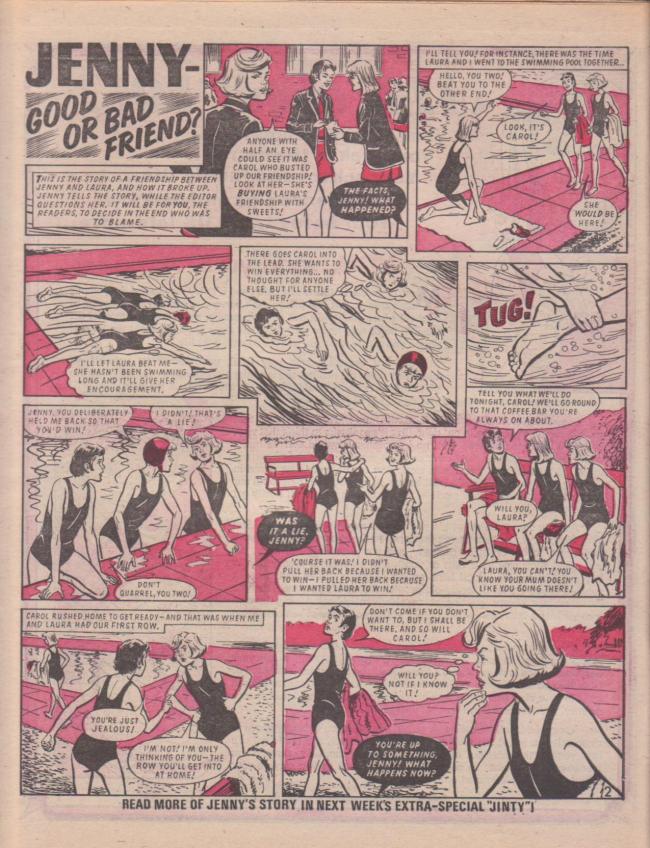 “This is the story of a friendship between Jenny and Laura and how it broke up. Jenny tells the story while the editor questions her – and you, readers, must decide in the end who was to blame”.

Jenny tells us how she and Laura have been friends ever since they were little. It has been an exclusive friendship between the two, with no other friends. Then Laura befriends another girl, Carol. Jenny, who has been long used to having Laura to herself, is understandably upset and resents the third party. The trouble is how she reacts. She blames Carol, accusing her of stealing her friend with bribes. Jenny then starts playing nasty tricks on Carol, such as sabotaging her efforts to win a swimming race (afterwards justifying it to the querying editor that she did it so Laura would win) and even on Laura, such as hiding her tennis shoes, in her efforts to come between Carol and Laura. Accusations and counter-accusations lead to arguments between Carol and Laura and Laura and Jenny. But things always get patched up and no breakups either way. But Jenny gets ever more furious and sees no wrong in what she is doing: “Carol’s trying to pinch my best friend, so anything’s fair!”

It all comes to a head when Laura’s birthday comes up. Jenny is furious when Carol’s present (a real gold bracelet) outdoes hers and believes Carol did it on purpose. Not to be outdone, she hires a conjurer for Laura’s party. Carol realises this and confronts Jenny, who replies, “Laura’s my friend, so she does not need presents from you!” But it backfires when Jenny finds she did not understand that the £2 she paid the conjurer was meant to be a deposit, not the full fee, and another £3 is required. Carol graciously offers to pay the money. But Jenny is far from grateful – she accuses Carol of making her look a fool and hits her. It is then that Laura breaks up with Jenny, saying it is because she has changed.

A very tearful Jenny tells us that she just wanted her friend back and never wanted any other friend but Laura, because Laura was the best friend she had ever had. She asks if it was her fault and if so, where did she go wrong?

“I can imagine how Jenny felt. For so long there had been just her and Laura; they had grown up together, been together since they were tots. Then along comes Carol – and Jenny resented her. Which, perhaps, was quite natural. But where Jenny went wrong was to allow Carol to spoil her own relationship with Laura. Laura was right, Jenny did change. She played mean tricks and she lied and cheated … and all because she wouldn’t share Laura with another girl.

“Poor Jenny! I think she was wrong, but I feel sorry for her … and I hope that, one day, she and Laura will make it up.”

Serials about friendships turning sour because of jealousy, or protagonists telling their own stories is nothing new in girls’ comics. But what is new, perhaps even unique, is the agony aunt take on it. Readers are invited to not only read and enjoy the story, but also participate in it, with assurances of their being the jury at the end of the story. So it must have been a let-down at the end when in the end there is nothing anywhere – not even an invite to the letters page – for readers to express their judgements on who is to blame. Instead, the editor presents her own opinion. But what still catches your attention is the constant breaking of the Fourth Wall as the editor keeps questioning Jenny (in black speech balloons) and Jenny giving her replies.

This is certainly a different take on the modes of storytelling in a girls’ serial. But this was the only time it ever appeared in Jinty. To the best of my knowledge it never appeared elsewhere. Perhaps it was an experiment that did not prove as successful as hoped? Maybe it was too moralising and preachy for readers’ tastes? Or was it just meant to be a one-page filler?

Even more to the point, why did this format appear at all? Perhaps the editor was experimenting. After all, Jinty was still new, and must have been open to innovative and fresh ideas. Or was it reprinted from elsewhere as a stop gap while Jinty was setting up other things in her line-up? Ah, the things we may never know without interviews.

Incidentally, Jinty‘s foray into the world of the agony aunt did not end with this story. Later she would run a problem page, and also a series called “Is This Your Story?“, where she would portray stories about problems and lessons that readers might relate to. In one story, a twelve-year-old thinks her parents are treating her like a baby, but eventually realises she was trying to grow up too fast. In another, a girl has developed a bad habit of telling lies. But inevitably she gets caught out in a lie and now fears expulsion.