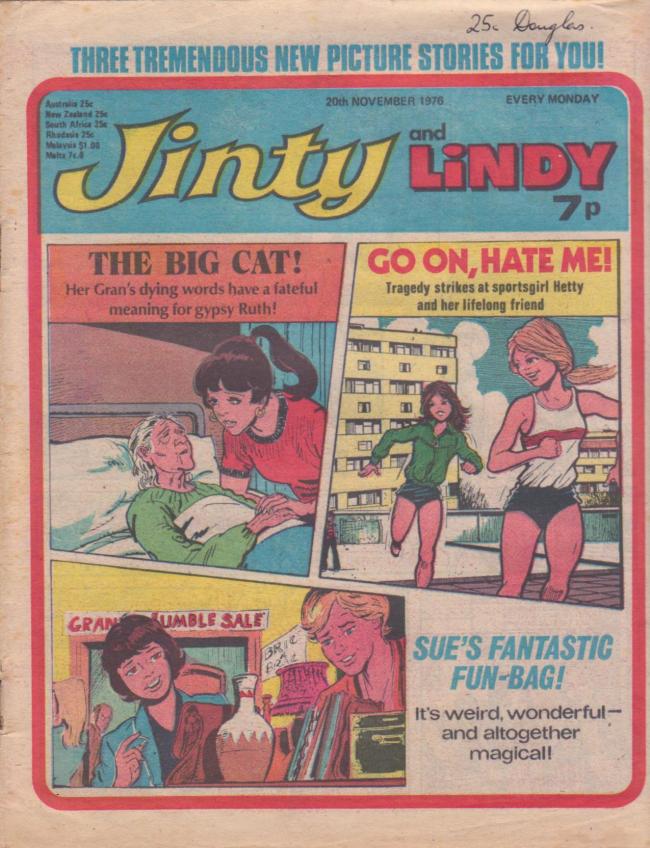 This issue marks the debut of one of Jinty‘s most popular humour strips, “Sue’s Fantastic Fun-Bag!” This strip would run for three years, arguably longer than The Jinx from St Jonah’s and Dora Dogsbody. Sue sees a handbag (brought back from the mysterious Orient) at a jumble sale and just has to have it. It seems that the handbag, which Sue names Henrietta, seems to be grinning at Sue, but Sue has no inkling of what she has bought just yet. But we do when a thief snatches the bag with the takings. He takes a comb out of the bag and when he uses it, he is astonished to find his hair growing to monstrous proportions and then wrapping around a pole. He ends up begging a policeman to arrest him. Sue takes back her bag, not noticing its mischievous grin. An interesting approach to the first episode, where we’re not told everything at once, but we have been given enough to have us eager for the next episode.

Two other stories start, “Go On, Hate Me!” and “The Big Cat”. The panel of happy running girls on the cover is a stark contrast to its title “Go On, Hate Me!” and belies the ugly campaign of hate that will start against Hetty Blake in subsequent episodes. Ruth Lee in “The Big Cat” is the target of a campaign as well, one that sees the council evict her gypsy camp. Ruth burns her caravan gypsy-style and sets out on a journey. Readers will see how it explains her dying gran’s prophecy: “Take care of the big cat and she’ll bring you luck and happiness at last.” What big cat? We get a hint that we will find out in the next episode when we read the blurb for it: “‘That’s Ayesha…and she’s untameable! A killer!'”

“Rose among the Thornes” is reaching its climax, with an unexpected twist that could backfire on the Thornes. A canister fell from a plane and wrecked gran’s cottage, which gives them the excuse to pull it down. But they don’t realise the canister contains a dangerous toxic chemical and it is leaking! Rose is on her way to warn them, and it is the race of her life.

Stefa gets even more daft with her heart of stone. Dad threatens to get rid of her statue, so Stefa runs away – with the statue on a wheelbarrow! You just have to laugh, and of course Stefa can’t get far when she is carrying a statue along.