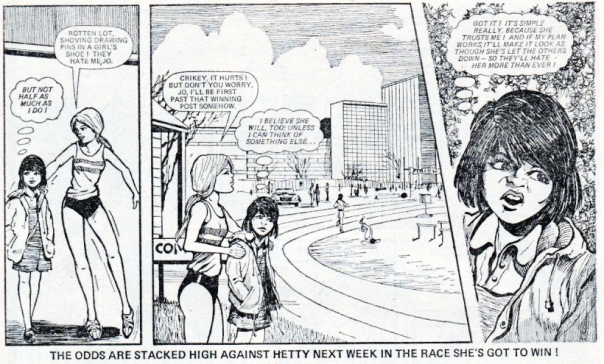 Summary
Hetty Blake loves athletics, especially running. She and her friend Carol are picked for a 400m relay at their athletics club. Hetty starts training hard and pushes Carol to do the same. She does not listen to Carol’s pleas that she is feeling unwell. Too bad for Hetty – if she had listened, she might have saved herself the nightmare that is to follow.

Carol ends up collapsing and is rushed to hospital. Hetty blames herself, but Carol tells her not to; she collapsed because she had a heart condition that she had not told Hetty about and did not have long to live anyway. Before Carol dies, she makes Hetty promise to win the relay and to look after her younger sister, Jo.

Afterwards, Hetty still blames herself and a doctor reassures her it was all due to Carol’s weak heart. Jo overhears what was said but believes the former, not the latter, and shouts hatred at Hetty. Soon Jo starts spreading the word around that Hetty caused Carol’s death by driving Carol too hard. Nobody listens to Hetty’s pleas that Carol just died of a weak heart; Jo says Carol would have told her if that was the case. Worse, Hetty is stuck with looking after Jo because she promised Carol. And Jo is adamant about staying so she can make Hetty’s life miserable.

Hetty’s athletics club has turned against her, but Hetty is adamant about staying and winning the relay as she had promised this to Carol. And she is determined to run, despite the hatred and secret tricks from Jo – one of which damages her feet. She does win, but gets no applause or thanks.

Jo proceeds to turn the whole town against Hetty. Hetty loses her job and cannot get another because nobody will dare to hire her. Now Hetty cannot afford the rent, and lack of income raises problems in looking after Jo. So Jo is now faced with the prospect of ending up in welfare. Hetty has been advised to leave town and does so, still lumbered with Jo. They end up roughing it and even getting a brush with the law. Jo does not understand that these are the consequences of her own malice towards Hetty and goes on blaming her.

In another town, Hetty finds a school where she gets a job as a fill-in PE teacher and Jo becomes a pupil there. Hetty starts an athletics team. But Jo starts spreading the word about Hetty, and this causes many of the girls to drop out. Hetty is worried that she may be forced out of yet another district. However, enough of the girls remain in the team for Hetty to train.

Hetty gets a shock when she finds they will be competing against St Viner’s – Jo’s old school! The Viners girls recognise Hetty and are waiting for her with a nasty surprise – a hate-filled demonstration. This is the last straw for Hetty and she runs off in tears. However, Jo’s attitude towards Hetty has softened towards forgiveness and she runs after Hetty. This has Jo almost getting knocked down by a motorcyclist; Hetty pushes her out the way but takes the brunt.

In hospital, Jo tells Hetty that she found an entry in Carol’s diary that she had not noticed before because the page got stuck down. The entry proves that Hetty had been telling the truth about Carol. Jo explains that she ran after Hetty because she had forgiven her, but now she knows she had been wrong all along and apologises. She wants them to be friends and stay together, and Hetty is very happy.

The reaction of the hatemongers is not recorded.

Thoughts
Stories where girls conduct a hate campaign against someone (or sometimes an institution, such as a school or hospital) because they wrongly blame them for something were common in girls’ comics, and could be told from the POV of either the persecutor or the victim. Sometimes there is a mystery involved, such as the victim trying to unravel why the person is persecuting them, as in Jinty’s “Cursed to be a Coward!”. But one thing remains constant – it always turns out that the victim was wrongly persecuted and the persecutor made a ghastly mistake. Usually, though, this comes to light at the end of the story, often with the victim not realising who and/or why until the end approaches. But here it is at the beginning. Jo did hear the doctor tell Hetty that Carol died of a weak heart and she should not blame herself. And presumably he did try to reason with Jo during the few days he kept her in hospital following her angry outburst at Hetty. But apparently none of it made any impression on Jo, who continues to blame Hetty until the final episode.

Another unusual feature of this story is that it is told from the POV of both the victim and the persecutor. Usually it is one or the other. It is even more unusual that it is not just one person doing the persecuting but whole groups of people. This makes the story even more disturbing, and it must make one strongest statements about how hideous hate can be when you see it in the face. The hatred Hetty encounters is truly frightening, ugly and even dangerous, with people going as far as to pelt her. And in the final episode, it puts Hetty’s life in danger as well. Keith Robson does a brilliant job in illustrating the hatred on people’s faces with his heavy line work, especially on their eyes and twisted expressions. And it is hatred that Hetty cannot escape from because she is bound by a promise to look after the girl who hates her.

The only thing that can counteract hate is love, and this is the statement that the story makes as well. The penultimate episode tells us that next week an act of hate will produce an act of love at last. And love is the key that makes the ending so powerful. It could have ended with Hetty just having the accident because the bully girls drove her out into the road, and then Jo finding the diary entry and just apologising to Hetty. But instead the story makes a powerful point about love and forgiveness, with Jo finally seeing past her hate and forgiving Hetty, and then running after her to try to put it right. And once she had forgiven, Jo must have felt an enormous difference as the hatred left her and learned a lesson about the value of forgiveness. Not to mention getting her facts straight before accusing people and the consequences of spreading nasty rumours!

It seems a bit odd that there seem to be no parents or relatives for either Hetty or Jo. Moreover, Hetty looks hardly old enough to have her own flat or job; she does not look much older than fourteen. The same goes for Carol. All right, so it was not uncommon for girls to be drawn younger than they actually were to be in girls’ serials. For example, Greta Jones in Tammy’s “Nurse Grudge” was eventually revealed to be twenty years old, but she looks like she is still in her mid teens. But it is stretching credibility a bit that both girls are apparent orphans with no grown relatives and looking hardly old enough to be independent. Ah, one of the things we are probably best not to think about too much in girls’ comics.