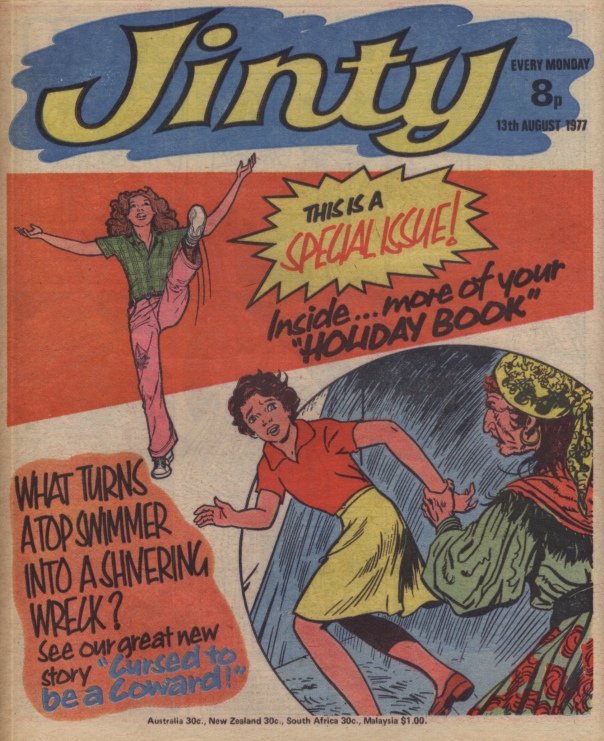 “The Robot Who Cried” is in full runaways mode right now, with robot Katy Fife trying hard – and unsuccessfully – to fool the kind doctor she is staying with. “Curtain of Silence” also has the protagonists trying to fool an adversary, also unsuccessfully, but the stakes feel much higher here as the the adversary is the villainous Madam Kapelski, who will have no compunction in putting Yvonne’s little brother out of harm’s way – forever!

Fran is acting cupid in another amusing episode of the fix-it story. She’s not a dodger like Roger and she always means well – for the people she likes! – but mayhem inevitably ensues. Right now she has a parrot and a talent for ventriloquism, and she’s not afraid to use them to make sure that her nice teacher Miss Harmony ends up with lovely boyfriend Michael instead of rotter Basil.

There are four pages in the initial episode of “Cursed To Be A Coward”, drawn beautifully by Mario Capaldi. They take us through the first few years of protagonist Marnie’s life; her chubby legs as a toddler are particularly delightful. She’s a pretty tragic heroine right from the start, though – her father is already dead in those initial panels of her as a baby, and in the next page or two her beloved older cousin is paralysed in an accident that starts off the persecution by a sinister fortune-teller.

“A Boy Like Bobby” shows us Phil Townsend back to one of his usual story themes: a small family unit down on their luck trying to stick together. This time it’s done differently, as the family unit in question consists of a tough older boy and a young brother, who touches protagonist Tessa’s heart because he looks just like her dead brother Bobby.