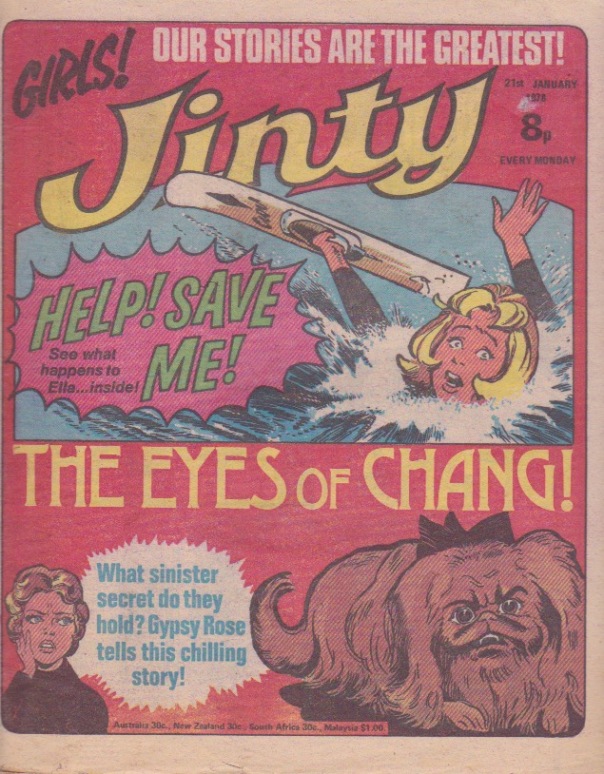 I dug this particular issue out because the Gypsy Rose story featured on the cover has really stuck with me. For this reason the cover does as well. I decided to upload the story itself along with the cover.

The cover promises us that this is a chilling story, and it sure delivers. It ends on a grimmer note than most Gypsy Rose stories, despite Rose’s reassurances to the heroine that she will find happiness if she forgets. Usually evil is vanquished in Gypsy Rose stories, but not in this case. It is still there, ready to strike again, in the form of an evil, possessive dog who will go to any lengths, including murder, to get rid of anyone who he sees as coming between him and his mistress. We really feel for anyone the mistress hires in the future (or probably has hired in the past) and hope the dog hurries up and dies.

This was the last story to appear in the first Gypsy Rose series. After this, Gypsy Rose disappears  from Jinty and is not seen again until 13 May 1978. Also, she had previously used her own material and interacted with the characters in her stories as a consultant. However, when she returns she is recycling Strange Stories from June/Tammy and is bodged over the Storyteller.

“Race for a Fortune” enters its penultimate episode. It’s a race across to the finish line. And the legendary monster (no, not Nessie) said to inhabit the loch they must cross? It turns out to be a money-making fraud, but helps Katie to get ahead of her scheming cousins after they smash her raft. She is setting off again, in a rowboat.

In “Land of No Tears“, the threads that will be tied up in the concluding episodes become manifest here. Cassie begins to discover the identity of the mystery trainer as her disguise comes off, and she is in for a big surprise when she sees the woman’s face. But we don’t see what the surprise is until the next issue. Perfecta manages to blackmail Cassie into throwing the swimming marathon in the finals after she discovers Miranda is seeing her mother illegally. On the other hand, Perfecta looks like she is seriously overdoing her training in her crazy determination to win the event…

Meanwhile, in “Darling Clementine” Ella’s training for the water-skiing event is not going well. The spirit is willing, but the flesh is weak. And poor Ella is still being wrongly blamed for Clem’s accident and is not even allowed to visit her in hospital. She has to pay surreptitious ones.

In “Come into My Parlour”, Jody is still under the power of Mother Heggerty, who is forcing her to harm the Saxton family. But her sister Tess has begun to notice things. Can she help?

Meanwhile, the parents in “Two Mothers for Maggie” are no help to her – in finishing her homework. The extra chores she is forced to do are making it worse and worse and slaving is all step-dad sees Maggie as fit for. Miss Keyes offer to talk to them, but will they see reason? We will have to wait until next week to find out.

And in “Waking Nightmare”, Phil Carey believes she has finally tracked down the institution where Carol is being held. But how to get in?

Finally, we have the blurb that “Concrete Surfer” will start next week. “Start the gripping story of this rebel on wheels in your next super JINTY!” Funny, the blurb says the issue will be out on Monday, January 23 – but this issue is January 21. Looks like a typo.