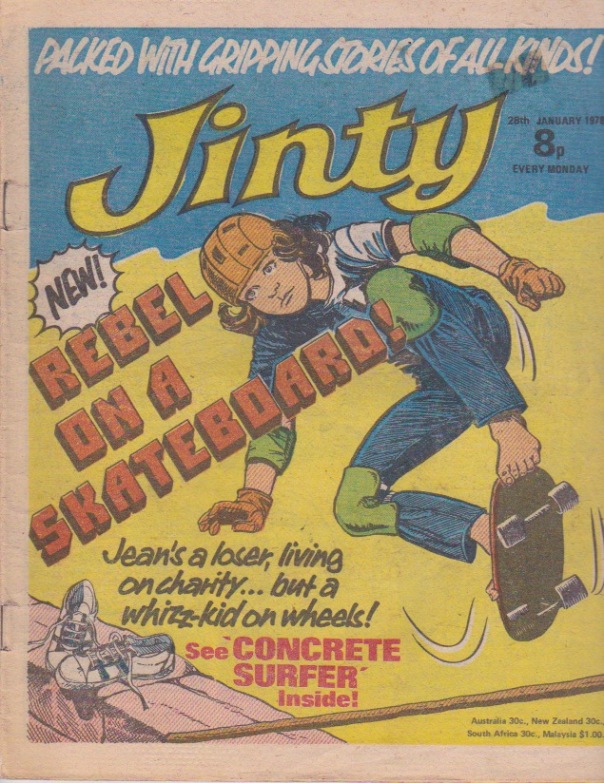 Well, this is the issue that begins one of Jinty’s best remembered stories, Concrete Surfer. Skateboarding is the only thing to come out of Jean Everidge’s stay in Australia. Her family are losers who failed at everything in Australia. Jean comes back to Britain, where cousin Carol and her family are the opposite – successful and well off. And Carol likes nothing better than being the centre of attention. The trouble is, when Jean is on a skateboard, she is the centre of attention. This will make skateboarding the bone of contention between the two cousins for the duration of the story.

Ironically, skateboarding also features in the final episode of “Race for a Fortune”. Katie’s sneaky cousin Rodney barters for a skateboard to get ahead of Katie’s roller skates in the final lap on the race. Fortunately for Katie, Rodney is nowhere near as good as Jean on a skateboard. But with a name like Ebenezer, you have to wonder what the uncle has really left for the winner of the race. “Race for a Fortune” will be replaced next issue by a much darker story, “Paula’s Puppets”. In fact, Jinty dares us to be honest – would we do as Paula does when she finds some weird puppets with strange powers? Maybe, maybe not. But then, surely we are not embittered by the same ordeal that Paula faces in this story – being bullied and stigmatised after her father is imprisoned for insurance fraud. He protests his innocence but is not believed. However, that is a story for another entry on this blog.

In the other Pat Mills story in this issue, “Land of No Tears“, the Gamma girls are doing really well in the finals. And judging by the Hive Inspector’s attitude towards the Gamma girls, we can imagine that he is not pleased. But Cassy is still bound by her bargain with Perfecta to throw the swimming marathon, which will mean they lose the trophy and their one chance of better treatment. However, the blurb for next week tells us that fate is going to take a hand, so there be even more readers eager to buy the next issue!

In “Two Mothers for Maggie”, Maggie gets a break from her abusive stepfather. But then her mother falls ill and is taken to hospital. Good breaks never last long for heroines – until the end of the story, that is. In “Waking Nightmare”, Phil is trying for a break of a different kind – breaking into Hardacre House to rescue Carol. So far she has not had much success, and now she is finding there is a mystery about the house itself. Another reason readers will be lining up for the next issue. And in “Darling Clementine”, Ella is trying for jobs to raise money for her water-skiing equipment to get into the club. But the snobby girls at the club are not making her welcome, and we are told that next week they will get even more spiteful. And in “Come into My Parlour”, Mother Heggerty forces Jody into even more spiteful acts, this time at a department store.

Gypsy Rose disappears from Jinty with this issue and is not seen again until 13 May 1978. Also, she had previously used her own material and interacted with the characters in her stories as a consultant. However, when she returns she is recycling Strange Stories from June/Tammy and is bodged over the Storyteller.