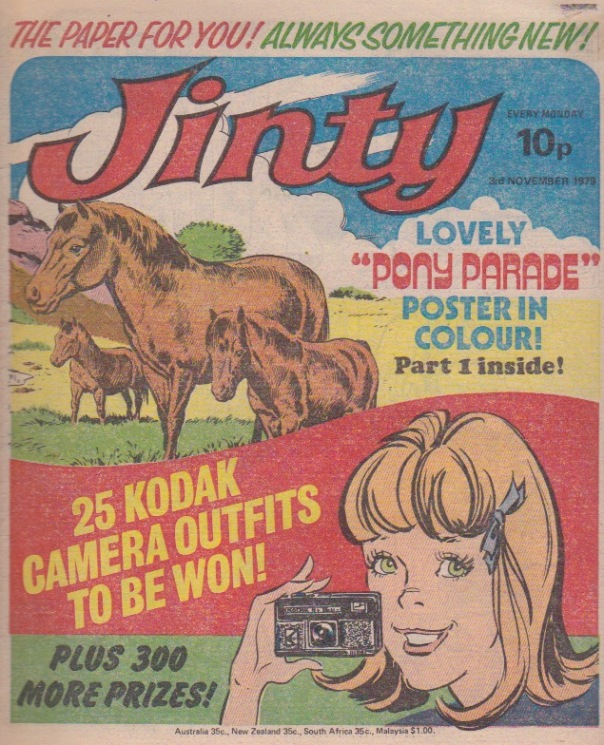 Jinty’s new competition and part 1 of her four-part pony poster knock all serials or Halloween/Guy Fawkes celebrations off the cover in this issue. The only thing honouring Halloween is the crossword; there are no regulars strips (Jinx from St Jonah’s, Fran’ll Fix It or even Bizzie Bet and the Easies) that could be used to commemorate Halloween or Guy Fawkes. There is no Gypsy Rose either to bring us a spooky story to celebrate Halloween at least. Even Alley Cat is up to business as usual.

And what drama in the stories have been pushed off the cover this week? Xenia, the “Almost Human”, finds herself in a life-or-death dilemma. She discovers that the lightning strike is draining her life force. She will die if she does not recharge herself with her medikit. But if she does, her touch will be deadly to Earth life again!

In “Village of Fame”, spoilt Angela is causing even more problems for our heroines because she wants revenge on her grandfather and blackmails them into helping her with it. Worse, Mr Grand announces that he is going to produce evidence that his TV serial is not harmful for the village of Fame. That can mean only one thing – something harmful! And from the sound of it, it’s going to be the climax of the story as well.

Julie begins to take to Buttons II after the dog runs away, but she feels disloyal to Buttons I.

In “Combing Her Golden Hair”, the mystery of Redruthan begins to unravel slightly, while Gran suddenly falls ill. We are told that Tamsin is off to Redruthan next week, so another climax is clearly approaching.

In “Waves of Fear”, Clare the outcast finally finds a friend and some respite from her ordeal in the form of orienteering. But Clare’s enemies are putting on the pressure to get her expelled, and spiteful Jean has a plan to do just that.

“The Black Sheep of the Bartons” finally does something right – she uses her judo to foil some burglars out to steal the school trophies. This becomes the only thing standing between her and expulsion. But what with Bev bunking off to judo when she should be swotting for exams and still needing to change her selfish attitude, expulsion may only be a matter of time. So we have two girls in danger of expulsion in the same issue! We shall be following their stories to see if that happens.