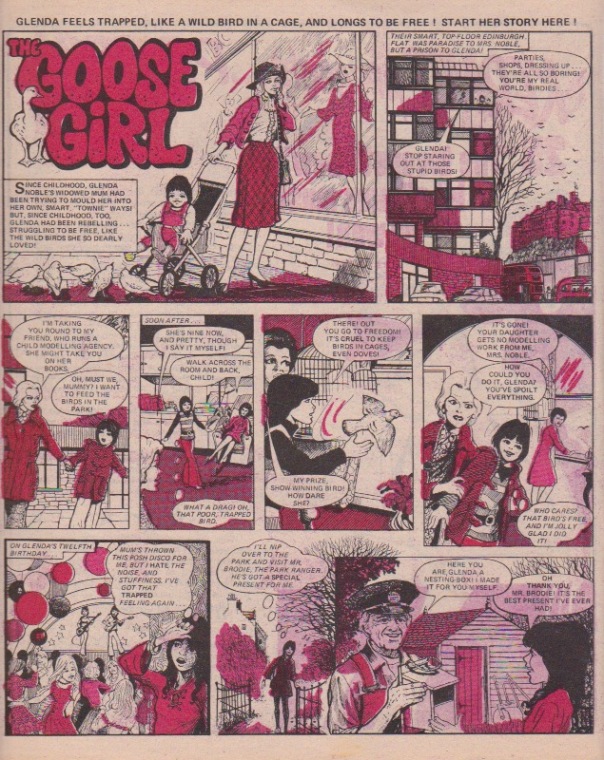 Ever since she can remember, Glenda Noble and her mother have been fighting over birds. Glenda just loves birds and is a born naturalist. But for some reason Glenda’s mother has a pathological hatred of birds and tries to crush Glenda’s love for them wherever she sees it. She keeps pushing Glenda into fashion design, which Glenda hates and rebels against. The war between them is further compounded by the fact that they are opposites: Mum lives for fashion, the high life, social climbing and the city, while Glenda is clearly the country girl who loves the great outdoors.

When Glenda is fifteen, she and her mother have to move out of their posh Edinburgh flat and into a country lodge left by Mr Noble in Solway Firth. This suits Glenda, who has always hated city life, and she takes to her new home immediately. But Mum hates the move as she is a city person, and it seems to strike a raw nerve with her too.

Glenda is horrified to find it is goose-hunting season. She finds an injured goose, which she names Brodie. She tries to nurse Brodie back to health, but the bird-hating mother means Glenda has to keep Brodie hidden. This causes a lot of difficulties. And when Mum finds out, she tries to stop Glenda seeing Brodie by taking Glenda out of school and giving her private lessons in order to keep her at home. It’s also part of Mum’s design to have Glenda give up her ornithology and push her into fashion design. Her ambition is to open a fashion boutique with the money Glenda inherits when she turns eighteen (but that is in three years!). She even locks Brodie in the shed to turn him over to one Colonel Graham to be disposed of. This is all part of her social climbing as well – getting in with the gentry and the high life. But Glenda finds the key and saves Brodie, so Mum faces nothing but embarrassment at the hands of the angry Colonel.

Mum reveals that the reason she hates birds (and why Glenda loves them) is because her husband, a naturalist, was shot while defending the geese against the goose hunters. And it is these same goose hunters that Mum is now supporting against Brodie and the other geese!

Glenda starts campaigning against the hunt, but meets with little success and popularity. The locals say they want the hunt because it is good for trade when the nobility comes for the shoot. She also makes an enemy out of Chrissie Milne, who is only too happy to sneak on Brodie to Mrs Noble, which she does several times. However, it’s not long before Glenda has a whole flock of wild geese following her around! And she soon has dreams of opening a nature reserve in Solway Firth for them. But her goose demo not only meets more hostility from the locals but gets Mum into more trouble with the Colonel she is trying to get in with. After this, Mum watches Glenda like a hawk and even shams illness to keep Glenda close to her.

Mum is now trying to set up a clothes shop back in Edinburgh and also move back there to get away from the “backwater” she hates. Of course she has done this without consulting Glenda and does not care for Glenda’s feelings, which are the complete opposite. Also, Glenda has her doubts about the sincerity of the couple who are putting them up. She is soon proved right – the couple soon tire of them when Mum can’t find a job in fashion selling because she is too old and they think the Nobles are presuming on their kindness. To make things more complicated, Brodie has tagged along. When he flies into the flat, the couple reach their limit and Glenda has another bust-up with her mother. Glenda and Brodie head off back to the lodge – in a snowstorm!

Mum returns (the couple have thrown her out) and tracks them down. She says she has fixed Glenda up with an interview at Edinburg Art College for fashion design. Glenda uses it as a pretext to get to Edinburgh because she has spotted a job going for a year’s contract on an African nature reserve. But the interviewer for the art college meets her off the train, thus preventing her from skipping off to her own interview. Glenda makes sure she fails the art college interview but arrives too late for her own. She leaves in tears, not realising she has dropped the photographs she took of Brodie that show the progress of his recovery and her aptitude for the job.

The interviewer, Mr Donald, sees the photographs at reception. He is far more impressed with them than with anyone he had interviewed that day. He also happens to be an old friend of Glenda’s father. Glenda’s address was written on the back of the photos, so Mr Donald tracks her down and offers her the job. But the possessive, bird-hating Mrs Noble refuses to let Glenda go. However, Mum changes her mind when Mr Donald gives them a tape recording made by Dad, which reveals that he had wanted to open a nature reserve in Solway Firth – the same dream Glenda has! Glenda is off to Africa, but first they use the money Dad left in trust to open the Solway Firth reserve. So the now-recovered Brodie and the other geese are now safe from the hunters.

Jinty was known for her environmental stories and we can see the environmental theme underlying this one too. In this case it is the issue of hunting and both sides of it: people who care more for profit and consumerism than nature, and the naturalists who want to protect the environment and the animals and birds who live in it. But naturalists often have a hard time being heard against hard-line attitudes towards environmentalism, as Glenda discovers when her campaign to protect the geese meets animosity and even threats of mob violence.

The environmental themes in this story are given a brilliant atmosphere with the artwork. Keith Robson’s artwork is ideal to the ruggedness of the Scottish countryside and the wildness of nature. His depiction of the grotesque looks on Mrs Noble’s face when she gets on her high horse about Glenda almost seem a well-deserved caricature of her and her unhealthy, possessive attitudes.

When we find out why Mrs Noble has such a bad attitude towards birds, we are even more outraged by it because she is doing things that would have her husband spinning in his grave: hating birds, helping bird hunters, denying injured birds care, handing birds over to be destroyed, and not respecting the things that he loved and lived his life for. As Glenda herself points out to her mother, she should hate the hunters. After all, they are the ones who fired the fatal shots and are the ones responsible for his death, not the birds. We might (grudgingly) understand Mrs Noble’s hatred of birds if, say, a bird caused her husband to fall off the roof and break his neck. But, really – Mrs Noble hating birds because her husband was shot while defending them makes about as much sense as hating victims of mugging because someone you love was killed while defending a mugging victim.

And we have to wonder why the Nobles ever got married in the first place because they were clearly polar opposites. She loves everything the city has to offer and the high life while he was a naturalist who loved the country and its isolation; we can see this in Glenda, who is obviously her father’s daughter. He loved living in the lodge while she hated it because country life was not for her. Perhaps it was a case of opposites attracting. But if he had lived, we wonder if the marriage would be similar to the stormy relationship Glenda has with her mother. Still, at least Glenda would have had her father on her side and encouraging her love of birds, and a much happier home life.

When we see the war between Glenda and her mother, we admire Glenda for being the rebel who refuses to bend to her possessive mother who keeps trying to crush her love of birds and push her into undesirable fashion designing. Glenda flouts her mother wherever possible. This is one girl who is not going to take things in silent resentment and we like a heroine who does not take things lying down. But Glenda doesn’t always win, such as when Mum tears up her sketches of birds in the first episode. And the odds stack up against her even when she moves to the lodge because the locals are hostile to her ideas about birds and endorse the goose hunting because it is good for business. It must have been the same for her father all those years ago. It is ironic that in the end it is Mrs Noble who saves the birds by agreeing to open a nature reserve for them with the trust money once she learns it was her husband’s wish. In so doing, she not only redeems herself but also adopts a much healthier attitude towards nature. She tells Glenda that she has finally learned to let go. This includes letting go her pathological hatred of birds, and letting Glenda go instead of being so possessive about her and forcing her into her mould.