This is the first annual we’ve yet looked at on this blog that is a proper solid Jinty publication, with a number of stories which look like they were produced specifically for this title alongside reprints that go well with the feel of the weekly paper.

The first story as you open up the annual features good old “Fran’ll Fix It”, one of my favourite humorous characters. The words ‘zany’ and ‘madcap’ were coined for her, and her adventures always bring a smile to my face. Here she is trying to solve some of her school’s financial woes by making her own laundry powder (and not telling anyone so they can have a lovely surprise!), baking cakes (unfortunately with the flour swopped for Plaster of Paris), and running a jumble sale stall (helped out by a crafty bit of ventriloquism that has her selling her goods in a very unorthodox fashion). Jim Baikie is at his best and silliest in this strip, and I would always recommend it heartily to anyone, so it’s a great one to start with.

A number of the stories included are clearly reprints, originally drawn for a publication of different proportions – a band has been added across the top and bottom of the page to fill in what would otherwise be blank space. This is pretty successful and passes unnoticed (certainly it is only on this re-read that it struck me).

Even harder to notice is the fact that one story, “Trudy on Trial!” has been reprinted from an earlier weekly format. This means that where the title was originally printed (as we see in the first page above) required the top panel of each new week’s episode to be lightly altered. This has mostly been done reasonably well, but there is one rather egregious example shown below… (look at the right hand side of the panel!) Again, it clearly worked overall, because it is only on this close re-read that I spotted it.

“Trudy On Trial!” is a light, amusing story that is still substantial enough to carry the centre part of the annual (it is reprinted in one continuous block as a good long chunk). Trudy is invited to her rich uncle’s house mostly because she is refreshingly outspoken and doesn’t suck up to get dosh out of him, but she is clearly kind-hearted and practical, and a real bond grows between them. The art is by Manuel Cuyàs who we have spoken of recently; it is memorable, having stuck in my head all these years, so that when I saw other examples of his work I could immediately link them. The artist signs a couple of the panels: here’s one:

There are also a number of Jinty-type strips drawn specially for the annual. The “Fran” story mentioned at the start is a good example – something that could easily have been in the regular weekly (though on closer look it has been drawn to the different proportions of this annual, which is nearer to A4 than to the weekly comic). “Can You Beat Sharp-Eyed Sharon?” reminds me of those few stories that address the reader directly, whether to moralise or to challenge: “Is This Your Story?” or “Jenny – Good or Bad Friend?“. It is a puzzle writ large: sharp-eyed Sharon notices some suspicious circumstances and resolves them, and the reader is challenges to spot the same give-away as she did. The art is by Keith Robson: not the most frequent Jinty artist but a familiar face bolstering the very Jinty-feel of this annual. 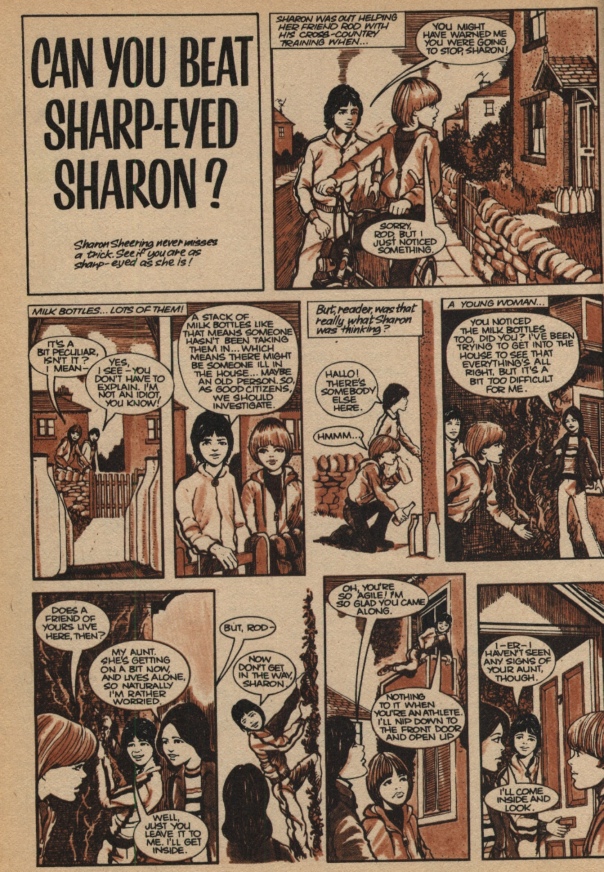 One of the other specifically-created stories is drawn by Phil Townsend – “Come Fly with Me”. It is about Joanna, a girl who lacks confidence and is bullied by her school mates and talked down to by everyone including her family. The only friend she has is old tramp Mr Andrews, who used to be the school janitor before his family died and his life fell apart. Mr Andrews believes in Joanna and encourages her in her artistic endeavours; he even ends up sending in her drawings for a contest, which she wins. This rather obvious story is done memorably enough that I have gone looking for it elsewhere in Jinty (though I had forgotten it was in this annual).

There are no fewer than four Gypsy Rose stories, one of which was drawn specifically for this annual’s proportions and hence is presumably not a reprint. It also features Gypsy Rose directly in the story itself; Mistyfan has pointed out before that the Strange Tales reprints cover lands far away and times long ago, whereas ones written specifically for the Gypsy Rose character feature her in the body of the story.

Two other reprints are single pages entitled “True Stories of Girls of the Wild Frontier”. The art is beautiful and makes me think it might be by J M Burns, but I don’t know his style well enough to be sure. They are not very PC for nowadays, unsurprisingly, with tales of derring-do fighting savage Indians…

I could keep going for a long time, as there is so much in this annual (for the princely sum of £1.25 when new!). The text stories are very readable – I like them in an annual though I don’t in a weekly, where I think they interrupt the flow too much. A couple of the stories feature lovely Terry Aspin artwork, which also endears them to me.  The features are quite fun though something I normally skipped over and certainly never tried – making a bottle garden, for instance.