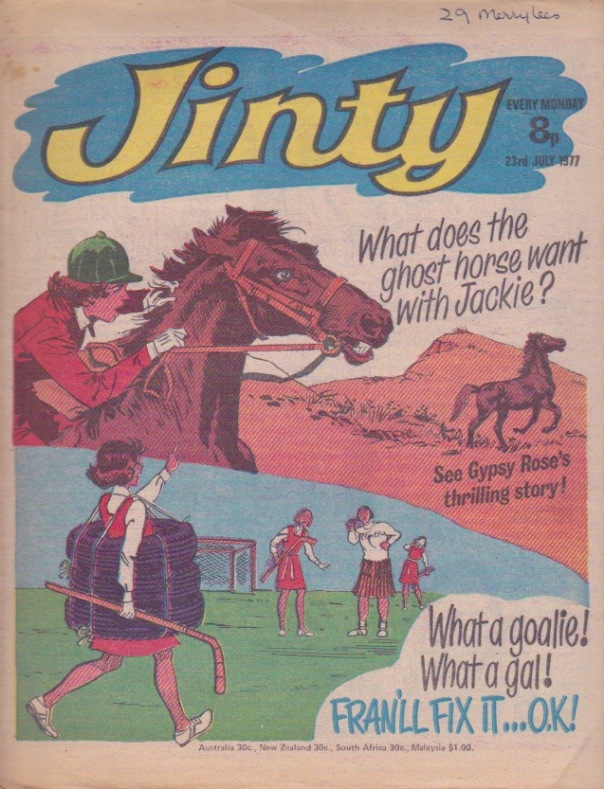 As you see on the cover, Fran gets some unusual gear on because she’s not confident about being goalie, having never played hockey. It works all right – until Clara takes revenge by rolling Fran downhill and she bounces against a rock. Well, Sal did warn Fran that her scheme might bounce back on her. The Gypsy Rose story that features on the cover is about a ghost horse that comes back to save its descendant from fire.

“The Robot Who Cried” discovers a new emotion – hatred – when some unsavoury people threaten her friend Susan, and she’s about to take a shovel to their heads! And with that super-strength of hers, anything could happen next week.

Madam Kapelski raises Yvonne’s hopes of escape when she takes her back to England. Her plan is to crush Yvonne completely with false hopes and it looks like it’s working by the end of the episode. Yvonne is in tears when she sees her mother and can’t call out to her because she’s still mute. But the blurb for next week about “the mystery woman in black” entering the picture sounds like events are going to take another turn.

“The Darkening Journey” looks even darker right now. Thumper leaves an animal shelter because he senses Julie needs him. But his health is failing and hope is fading.

Gymnast Kate finds ballet Kate has pulled a fast one on her when she tries to break into her home to get the money for her allowance. But she gets the money anyway!

In “A Boy Like Bobby”, Tessa agrees to hide the boys from social welfare because they are scared of being separated. But this means living a lie and risking trouble with the authorities. And to make things more complicated, Tessa’s friend Cathy is suspicious!