Most of the readers and contributors to this blog are likely to be people who originally read the comics under discussion, and maybe kept on reading them. It’s probably easy for us to remember what stuck in our minds from that time: we’ve perhaps kept those issues, or re-bought them, or been sent scanned copies by other fans and interested people. Of course we’re in the minority: most of the thousands or millions of the original readers stopped reading comics, gave them away or lost them in various ways, and probably don’t on a day-to-day basis think about them very much. That reading material will have made its mark nevertheless; if you search parenting site Mumsnet then you will find a persistent theme in threads where UK mothers, in particular, bemoan the lack of the sort of comics they used to read as girls, and/or remember the stories they loved from the time. This struck me as a great way to get an unmediated, unprompted sense of what really was memorable from people’s reading of the time.

The specific prompt for this came from me checking my referrer logs in recent days: a number of visits came from a discussion on Mumsnet about the comics the commenters used to read as girls. However, it also tied in to a recent comment by Marc about reader preferences about whether most girls preferred to read stories that could happen to them, rather than stories that were outright horror or fantasy. Of course reader preferences at the time needn’t correlate perfectly with the most memorable stories: one of the Mumsnet commenters asks whether all the stories ended unhappily, and further down someone else replies with an answer that I think hits the spot: “I think a fair few eventually ended happily, but only after much travail. … I think the disturbing ones stay in your mind much more though.”

This post therefore looks at the Mumsnet thread mentioned above in more detail (without going as far as providing proper numerical analysis as I find time has run away with me). In that thread, some comics titles, stories, or characters got a very strong shout-out, without necessarily having many details associated with those memories. Bella the gymnast was mentioned several times, as were the iconic Four Marys. Likewise Nancy the Nurse from Twinkle gets quite a few mentions, and so does a story I’ve never heard of at all, “Walter Hottle Bottle”. Individual titles are mentioned multiple times: Mandy and Bunty are the two that start the thread, but Twinkle seems to be a surprisingly hot favourite. Misty is mentioned several times and Tammy too; Jinty fewer times than I would hope 😦 but with great warmth when it is :-). June and Schoolfriend is accounted for, along with Girl (of course), Debbie, Nikki, Tracy, Judy.

If you click through to the Mumsnet thread you will see that I have just taken specific excerpts where people have discussed a particular story in more depth or with more fervour; in a thread with more than 200 comments not everything will be able to be looked at here, of course. (NB – the thread has a warning on it that it will be deleted after 90 days.) What sort of memories are still alive after all this time?

Some commenters’ memories were very vague and uncertain, although with enough detail for the knowledgeable reader to be able to identify them without too much difficulty:

In other cases, further details were remembered, even as far as the story title, which is pretty good going for a story that ran for a quarter or half a year, some decades ago!

Some memories, however, were not only detailed, but clearly signaled something very persistent over the years: a living memory the creators could be proud of having engendered.

In various cases, multiple people clearly shared the memory, too, showing how powerful it was.

It isn’t surprising that long-running characters Valda and Bella – quite different from each other, but each the star in multiple story arcs over the years – rang a number of bells with the readers decades later. So did The Four Marys, though part of the discussion there was just trying to remember their surnames. Later ongoing stories such as “The Comp” and “Luv, Lisa” also make an appearance. Wee Slavey gets one or two mentions; not as many as I might have expected.

But some other individual characters are fondly remembered by name, too: 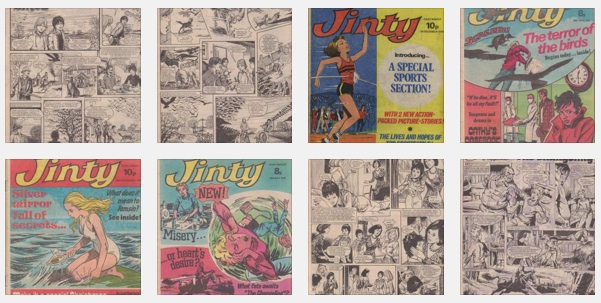 Some of the memories give other useful context: what did the stories provide to readers? Were copies were kept and re-read, or not? How did the stories get used socially?

I love the fact that once their memories are prompted, these readers from the past have such vivid details elicited. I never drew my own versions of any stories, but I remember dreaming about Jinty stories – my bed encircled with the villains, and an inner circle composed of the magical heroes, protecting me – Corn Dolly and Epona fighting off Miss Marvell’s evil mask and! Without this sort of anecdote told after the passage of many years, it would be hard for publishers, creators, and grown up readers to realize quite how strong a hold these so-called disposable publications really had on their loyal fans.

15 thoughts on “Remembrance of things past”