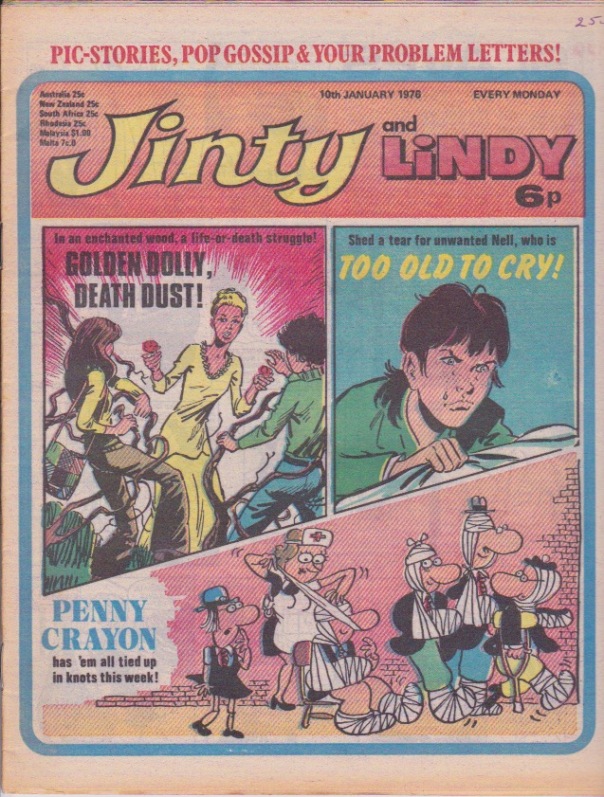 This is the last episode of “Golden Dolly, Death Dust”, so it is fitting that it should have a final appearance on the cover too. Next issue Phil Gascoine starts his new story, and the longest he ever drew for Jinty – “Fran of the Floods”. And although Nell’s story says she’s “Too Old to Cry”, the cover definitely shows her crying in this episode. I have always felt the title of this story was a bad one. Couldn’t they have chosen something more descriptive?

Elsewhere, Ping-Pong Paula has achieved her latest victory. But Mum spoils it with her pride and turns away because she was obliged to share Paula’s victory photograph for the paper with her estranged husband. We are told that it’s the climax for this story next week. Oh good – it’s about time those quarrelling parents were sorted out.

“Slaves of the Candle” is also approaching its climax, with Mrs Tallow threatening to burn down the House of Candles – with all Lyndy’s friends in it – if Lyndy tries to stop her stealing the Crown Jewels. At this, the long-fighting Lyndy finally gives in. But the blurb for next week tells us fate has a surprise in store. The artist has also changed for this story; Roy Newby has been replaced by a filler artist, whose name is not known. But Newby will be back to draw the story that replaces this one – “Bound for Botany Bay“.

In “Friends of the Forest” a new friend, Maya, emerges to help Sally against the nasty Walkers who treat her like a slave and want to sell her beloved deer to a circus. But it turns out that Maya is on the run, which is sure to cause even more problems.

Wanda, the biggest tattletale in the school, makes herself even more unpopular, and poor Sue cops some of the blame as well. And now Wanda’s been appointed a prefect, which means it’s bound to get worse. And it starts with Wanda accusing Sue of stealing!

Hazel’s beginning to understand why she’s being haunted, and she is defying orders to go home so she can investigate some more. And it looks like she’s going to get some help from Marnie, the old woman of the mountain.

And in “Song of the Fir Tree”, Solveig and Per have escaped Grendelsen’s latest attempt to kill them. Unfortunately their father thinks Grendelsen succeeded and is giving up the search for his children and heading home.