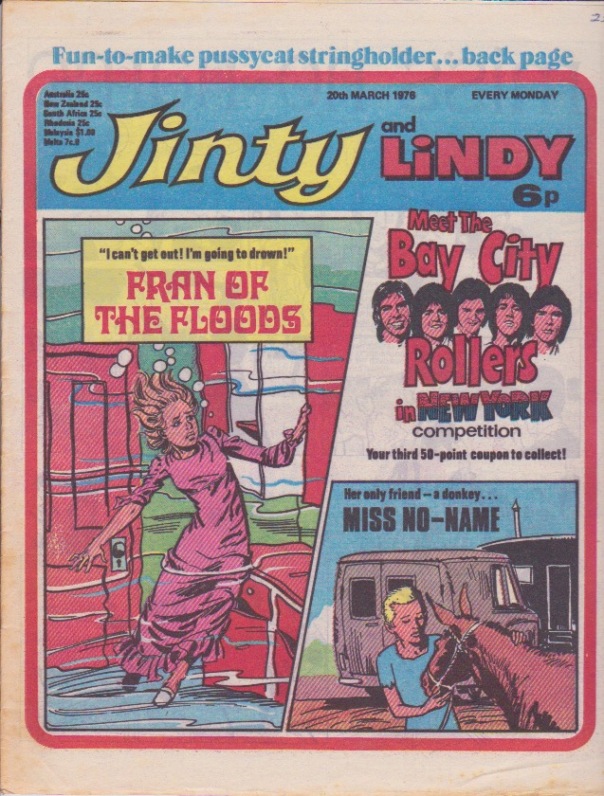 Fran is in danger of drowning while diving for food in a submerged village – and all for nothing because the food has already been taken. And as the cover says, Miss No-Name’s only friend is a donkey, but Ma Crabb is using it to ensnare Lori even more by threatening the donkey with nasty things if Lori does not do as she says – which includes a dangerous climb on a ruinous tower!

Miss Wortley goes too far with her cruelty to Betsy and Betsy collapses from sunstroke. And now Miss Wortley has turned on Mary with a terrible punishment that could cause Mary to die from fright. Next week Betsy resorts to desperate measures to save her, and we have a strong suspicion this will mean doing a runner together. It had to happen.

It’s part 2 of the Slave of Form 3B. Stacey is still at the testing stage of her hypnotic powers over Tania. But now she’s satisfied and is out for bigger things with her new power.

Nobody is signing the petition to save old Smokey – until they see Gresby bullying Billie! Next moment they’re flocking to sign, so that’s one mean trick that’s backfired on Gresby. But he’s back with another trick – setting Old Smokey on fire!

Carrie Lomax is on her way to Scotland to stay with gran, because Mum has too many problems over poor sick Peter to give her the attention she needs.

Katie the Jinx and her friends are taking the bus to see a horror movie. But their attempts to get in the mood for it end up jinxing the driver. He is full of dread when he hears them talking about how they are going to get into the mood for the cowboy movie next week.

The nasty Walkers and their ally Miss Knight are finding that the Friends of the Forest are very adept at hiding and can’t flush them out.

It’s high fashion in Dora Dogsbody as Ma Siddons has them dressing up in smart clothes for a fashion parade. She says it’s all for charity, but when Dora finds that Ma Siddons’ charity is herself (surprise, surprise!), it’s all hilarity as Dora puts things right.