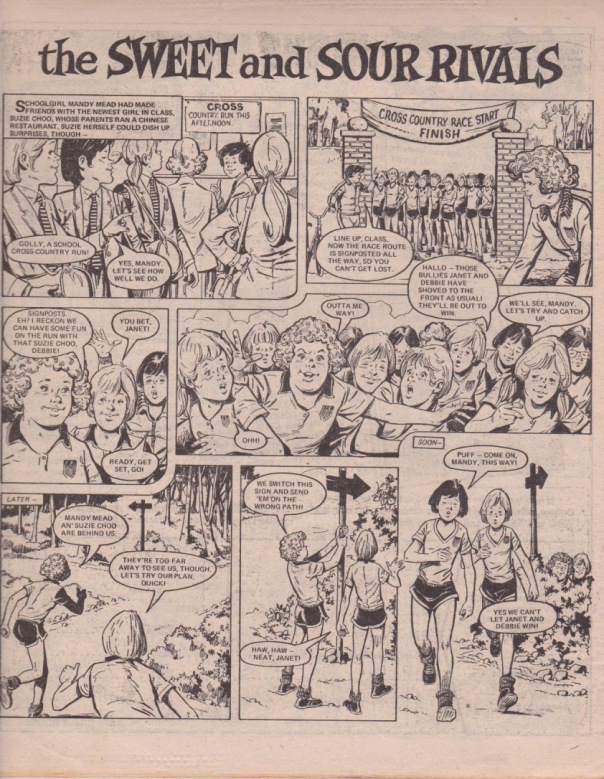 In comics, rivalry between businesses always had a ‘good’ vs ‘bad’ format, with the bad business out to pull every trick in the book to come out on top of the good one, which always conducted itself honourably. Sometimes this was done in a serious manner, with lots of dirty, dangerous subterfuge that could even threaten lives. Other times it was done in a comic manner, with the ‘bad’ business getting a comeuppance every week. The best-known example of this is “Store Wars” from Whizzer & Chips.

The humour format of the good business vs bad business was used in one of Jinty’s last humour stories, “The Sweet and Sour Rivals”. The rivalry is over two restaurants: the newly-opened Choo’s Chinese Restaurant and Riverside Cordon Bleu Restaurant, which is the snobbiest restaurant in town and charges the highest prices. But the rivalry is not fought by the owners but by their daughters, Susie Choo and Abigail Beaton. Abigail is just as snooty as the restaurant and recruits help from class bullies Janet and Debbie to find ways to bring Suzie and her restaurant down. Fortunately Suzie has a friend too – Mandy Mead – who thought her school was as dull as dishwater until Suzie joined the class. But Mandy was instantly struck at how Suzie could play brilliantly at hockey after the bullies smash her stick (she’s used to chopsticks) and be such a whiz at mental arithmetic (because she orders things by numbers) and now thinks school is going to be fun with Suzie around.

Indeed it is fun, but it is not free from trouble. Abigail and the two bullies are out to sabotage things for Suzie and her restaurant. For example, they smash the sign Suzie has created to advertise the new restaurant, set motorcycling toughs to bully the Choos into giving them free meals, and recruit a parking warden “Dora the Dragon” (with offers of a free meal) to harass the restaurant with unfair parking tickets. But they always fail in the end, due to a combination of Suzie’s ingenuity and a dash of her Chinese culture. For example, Susie turns the smashed sign into a model Chinese junk and floats it around on the river as an advertising stunt. A fierce-looking (but harmless) panda is let loose in the restaurant to scare the motorcycle bullies off. Dora the Dragon meets her downfall from a Chinese dragon that the Choos are using for more advertising. The school bullies are blackmailed into carting Suzie and Mandy back to school in makeshift Chinese rickshaws.

It all climaxes at the school open day fete. The Choos set up a Chinese food stall, and Abigail sets out to make them look fools by poking fun at Chinese food names and then setting dogs on the stall (a reference to the Chinese dog-eating culture). But Suzie beats the dogs with a great wall of china – real china. The final panel has Mandy saying to readers that Suzie is her old ‘china’ – Cockney slang for mate.

How PC the play and puns on Chinese culture and words would be in today’s climate is anyone’s guess. Still, it is a nice change to have an ethnic girl as the star of the show, something that didn’t appear much in Jinty. The story itself is fun, filled with inventiveness and comeuppances that are guaranteed to delight readers.