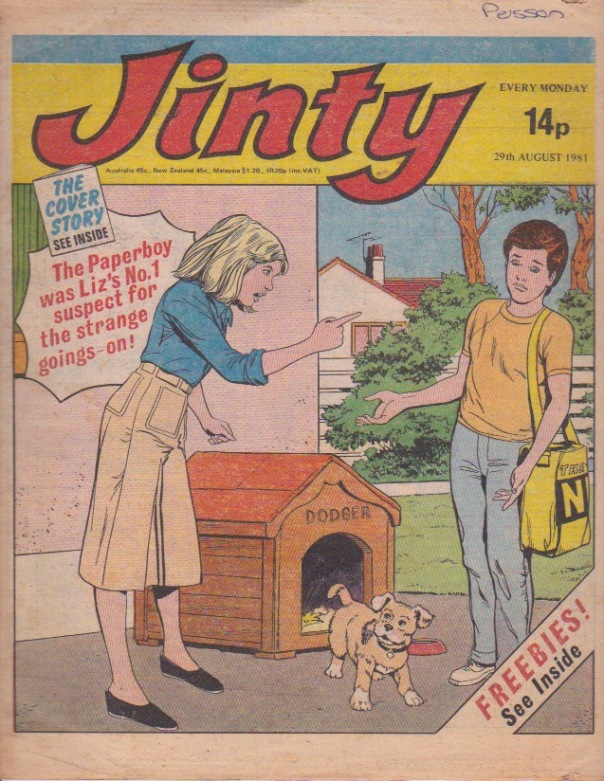 The Gypsy Rose story is a bit surprising because it is not a recycled Strange Story. It is completely new, with both Gypsy Rose and the story being drawn by Pam of Pond Hill artist Bob Harvey. The story is about a spoiled, stuck-up rich girl who learns money isn’t everything – from a kite, would you believe!

The school governors visit in “Dracula’s Daughter”. It’s a bit incomprehensible that such an upright, stuffy lot are governors of a liberal, free-and-easy school. But it also gives you a clue as to what the hell they were thinking when they put Mr Graves, a man from a strict, old-fashioned grammar school, in charge of the free-and-easy one as headmaster. However they are reconsidering appointing him for the wrong reason – they have been deeply offended by Lydia’s one-girl demonstration against his changes, and his job is now on the line.

Mo’s crime world in “Worlds Apart” ends with her concrete shoes, and Jinty seems to be using it to make a statement about the evils of crime. When one world dies and another takes over, the usual pattern is for the firemen (at the chemical accident that caused the girls’ worlds to come true) to linger over the unconscious form of the particular girl whose world is about to unfold. But in this instance the story dwells on Mo’s murder and her thinking that she has been killed by very crime world she dreamed of. And in the real world, the firemen are looking at the unconscious Mo, who recovers briefly before drifting off into the next world, which is Clare’s. But the firemen don’t pause over Clare at all. Then Clare’s world starts with the girls becoming stupid sub-humans called “dullards’. The reason they are stupid in Clare’s world is that brainy Clare always considered them stupid in the real one. And they are being used as guinea pigs in her laboratory.

Elsewhere, Tansy finds a hanky with a knot in it and wracks her brains to remember what she tied the knot for. She finds out that what she should have remembered was to check to see if the hanky was hers in the first place! Angela’s Angels are dealing with a difficult patient who is bitter after being told he is now paralysed from the waist down. In “The Sweet and Sour Rivals”, Abigail thinks she can bring down the Choos’ restaurant when she hears them talking about “paddy fields” and thinks they are setting up rice paddies in the garden. But she ends up looking a noodle, as usual. In “Gaye’s Gloomy Ghost”, things get steamed up when Sir Roger neglects a kettle and it burns out. And Dad turns Arab to protect the secret of the “Holiday Hideaway”. Although Hattie helps him, she hopes he will learn his lesson after ruse gets him caught in drenching rain and stop all this nonsense. Some hopes!