Toni Carr is a promising runner. When her parents are killed in a crash, she is sent to live with her maternal grandparents, the Halls, in Millcastle. Toni is surprised to learn about them, for her late mother never mentioned them before. She is told that her mother ran away from home when she was sixteen.

Sounds like a skeleton in Mum’s closet? Oh yes, and it starts rattling when Toni is even more surprised to find a photo of her mother wearing a sports medal in an album; she had never known her mother to be athletic too. She is further surprised – and in a most unpleasant manner – when Granddad rips up the photograph, saying he thought they’d got rid of Mum’s sports photos.

Toni discovers the sports club on the side of town that looks wealthier than where her grandparents live. There she shows promise at the trials for the junior team. But the sports coach, Miss Adela Rogers, is nasty to Toni once she realises she realises who her mother was. She tells Toni that her mother was a thief, and that was why she ran away.

When Toni confronts her grandmother, she is shown a newspaper article that says her mother stole a sports trophy out of spite because she lost it to another girl (later revealed to be Adela Rogers) in a race. The ensuing scandal was so bad that Mum ran away and gave up the athletics she had shown so much promise at. The grandparents were also forced to move to the poorer part of town where they still live today after Granddad lost his job defending his daughter. But even they doubt her innocence. Toni refuses to believe her mother was a thief and resolves to get to the truth.

Toni has shown so much promise at her trials that Olympic champion Sharon Peters wants her in the team. But Toni is finding that her mother’s disgrace is now threatening her own career. Granddad is opposed to Toni pursuing sports because of the trophy scandal and only agrees begrudgingly. But neither he nor grandma will give Toni any support or encouragement. And Miss Rogers only agrees to put Toni on trial until she proves her character, but is always out to bully her because of her mother. This does not make Toni popular with the other athletes, and Toni ends up banned from the club and having to train on the old track her mother once used.

Worse still, Toni makes an enemy on the team in the form of Julie. Julie and her crony Patti start playing tricks on Toni. Toni makes some headway in the trials despite the dirty tricks, hostility from her mother’s shame, and Miss Rogers banning her from the club because of it all. Toni eventually realises an enemy is sabotaging her, but thinks it is Miss Rogers.

Eventually the misery from her mother’s disgrace gets too much for Toni and she runs off in tears. This leads to her saving a child and she becomes a local heroine, which should ease the trouble from her mother’s disgrace. But Toni is so badly affected by it and her unknown enemy that she gives up athletics. Sharon arranges a special event with handicapped athletes to change Toni’s mind.

Toni does, but is dismayed to find her club is about to compete for the very same trophy her mother was accused of stealing. And when she does win it, her grandparents ban her from the presentation party because that was when her mother was branded a thief after the trophy was found in her bag. Toni goes anyway, but the old trouble is hanging over the party. However, Toni meets Sharon’s sister, Mrs Collins, who was her mother’s best friend. Mrs Collins says she does not believe the mother stole the trophy either. She would have helped the mother prove her innocence and knows something that might help.

But Mrs Collins is interrupted when a real thief steals the trophies. Toni manages to stop him. However, her only reward in the paper is the headline “Brave Athlete Saves Cup Her Mother Stole!”

Toni meets Mrs Collins again, who explains that Miss Rogers hated her mother because she was jealous. After she beat Toni’s mother, Mrs Collins overheard a row between them. The quarrel was over a rule Adela broke when she won the trophy; Toni’s mother told her to own up but Adela refused, saying it was a silly rule. Mrs Collins is sure the quarrel is connected with the trophy theft, but her mother never explained what it was about.

Later, Miss Rogers bans Patti from an event because she broke the no-drugs rule for taking hay fever medication. Recalling that Miss Rogers also gets hay fever, Toni sees parallels with the quarrel Mrs Collins overheard. She now suspects that Miss Rogers is behind everything, but has no proof.

Things come to a head when Miss Rogers steals some belongings and plants them in Toni’s bag. But Patti sees this and backs Toni up when she accuses Miss Rogers of it. At this, Julie makes an angry outburst at Patti that gives her away as Toni’s enemy.

Cornered, Miss Rogers confesses that she planted the trophy on Toni’s mother because she thought she was going to report her for the same thing as Patti. Later she discovered she had been mistaken, but by then things had gone too far and she was too scared to confess. She is compelled to resign as club coach and leaves in tears. Afterwards, Julie is told to mend her ways if she is to stay in the club.

Toni’s trial period is now over and she becomes a lifelong member of the club. Now the mother has been cleared, the grandparents back Toni’s athletics all the way. Toni is soon on her way to London for the English team try-outs. 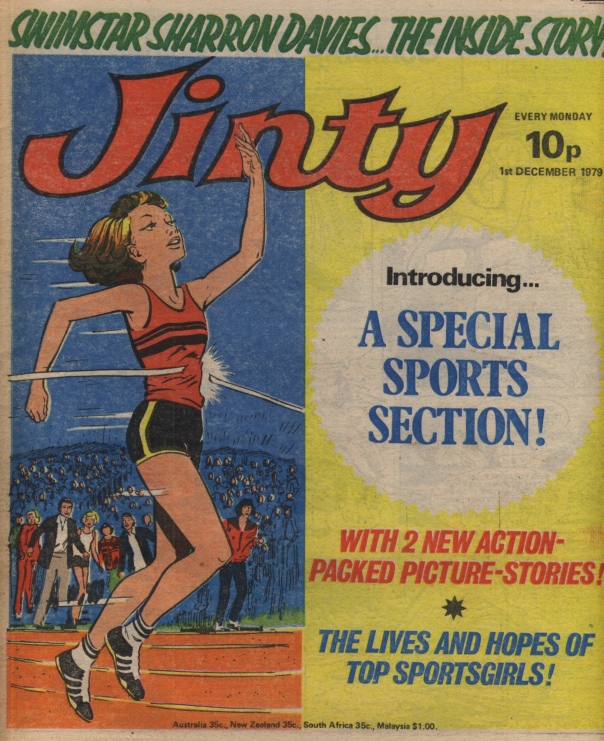 This story is something of a milestone for three reasons. First, it is the last story Terry Aspin drew for Jinty. After a run of Jinty serials that began with “Curtain of Silence” and included the classics “Alice in a Strange Land”, “Almost Human” and “Cathy’s Casebook”, Aspin ends his Jinty run with Toni.

The same goes for Jim Baikie, who ends his own Jinty run with the other sports story to start in the same issue, “White Water”. Is this a coincidence, or does it say something about what is going behind the scenes of Jinty? It is known that Mavis Miller left about this period and things were not quite the same again with Jinty under the new editor.

Second, “Toni on Trial” and “White Water” begin Jinty’s sports pages section and banner to match. Although sports stories had been strong in Jinty since 1977, the sports pages section marks a whole new emphasis on sport in Jinty that would be further underlined by Mario Capaldi’s sports covers starting in mid 1980 and Benita Brown’s “Winning Ways” tips for winning sports.

Third, Toni on Trial is the last Jinty story to feature the theme of injustice from a wrongful charge. The topic had been in Jinty from her first issue with her longest-running serial, “Merry at Misery House”, where Merry Summers is sent to a cruel reformatory after being wrongly convicted of theft (the exact details of which were never explained). After Merry ended, Jinty didn’t use the theme much. Stories that did feature it were infrequent (“Paula’s Puppets”, “Slaves of the Candle” and “Waves of Fear” were ones that did) and after Toni, the theme disappeared altogether.

Toni on Trial is not quite one of Jinty’s classics. The formula – quest to prove someone’s innocence, frame ups, jealous rivals, difficult guardians interfering with a girl’s dream – is a bit standard and does not have the innovation that made a lot of the Jinty classics that Aspin drew what they are.

However, while the formula may be an oldie it is still a goodie, and makes the story a solid one and far from average. It’s also a mystery story, which is always popular in girls’ comics. The fact that it’s not just the whole town believing Toni’s mother is a thief but even her own parents doubt her gives the story an extra edge. This has some parallels with “Waves of Fear”, where even the parents turn against their own daughter after she is branded (a coward in her case), becomes the outcast of the town, and is eventually driven to running away before it is established that she was wrongly accused. And both stories appeared at the same time, so there may be some overlap in the writing.

What’s even more angst is that for the most part, Toni has to battle alone to prove her mother’s innocence. Although Anne and Sharon refuse to tar Toni with the ‘sins of the mother’ that everyone else in town does, they are not part of Toni’s drive to clear her mother. There are no allies to help Toni, and nobody to talk it over with. It’s not until near the end of the story that the person who can really help Toni finally turns up. This is not unusual in stories where the heroine sets out to clear somebody’s name. But the fact that even your own relatives won’t help because they don’t really believe it’s an injustice makes it more disturbing than the more usual case where the relatives do believe it, but can’t or won’t do anything to help. Maybe it’s to do with the town itself and the way it has reacted to the whole affair. It is still green in everyone’s mind, even after all these years, and people are so ready to attack Toni because of it, just because of who her mother was. Nowhere is this more apparent – and cruel – than the headline “Brave Athlete Saves Cup Her Mother Stole!” All right, so maybe Miss Rogers had a hand in it, but what a way for the press to treat a girl who should be honoured for her bravery! You have to wonder what kind of people the people of Millcastle are if they publish headlines like that. One should jolly well hope the town came out with some jolly good apologising to Toni and her grandparents once Miss Rogers had confessed.