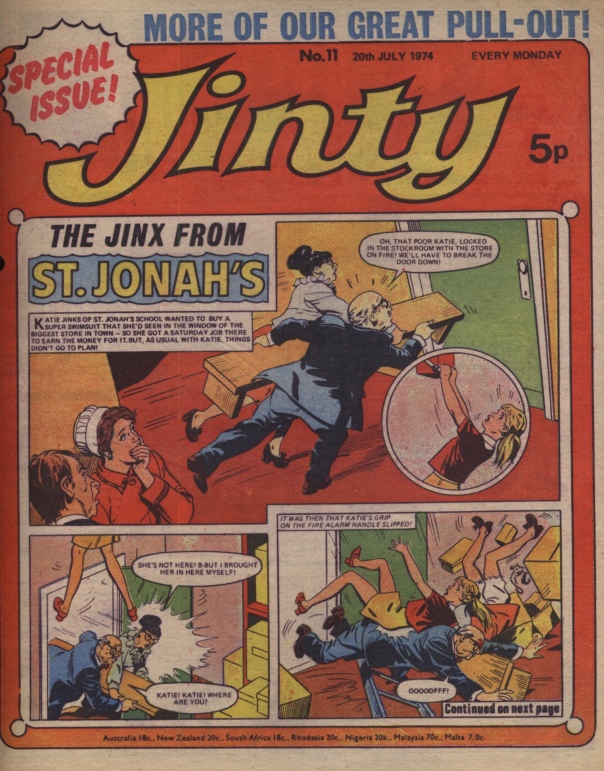 Katie Jinks is kicked out of her new job, for having inadvertently set off the fire alarm, scared all the customers out of the shop, and soaked her boss in the bargain! The reason she took that job in the first place was to be able to buy herself a swish new swimming costume, which she now can’t afford – but at least she can buy some patches in the store – “It’ll be a little bit of profit for them, to make up for all the trouble I caused!” Of course with Katie it’s never that easy – she is the 100,000th customer to the store and gets a prize as a result – reluctant though the manager is to grant it! This turns out to have been a really good, solid two-parter, with plenty of gags and plot twists. There’s even one at the end – the costume she’s been after is a sunsuit, which shouldn’t be used to swim in – so she has to give it to her mother and resort to patches after all!

“The Haunting of Form 2B” comes to an end in this issue. The girls are indeed in big trouble in a small boat, and nearly drown – but it is not Judy Mayhew’s intervention that saves them. The ghost teacher warned a lock-keeper who helped to rescue them just in time. Just as well, as in trying to save them (as she thought) it was actually Judy who was acting massively recklessly and would have got them all drowned. Very much like the curse in Macbeth! But because Miss Thistlewick was able to save the girls in the end, her spirit is now at rest and she can leave them in peace to enjoy their modern lives.

Everything is working out beautifully for Gwen and her Stolen Glory. The grateful parents of the girl that everyone thinks she rescues are buying a house for her and her family to live in, and Gwen’s talent has won her a place at drama school now that she has been given some attention (and now that injured Judith is out of the way). The only risk to Gwen is if Judith ever regains her memory – and Gwen is far-gone enough now to be happy to prevent that from happening.

Make-Believe Mandy has to pass more tests set by Miss Madden. What has complicated things is that Mandy’s cruel family have twigged that there is something going on, and have tried to horn in on what might be coming to her.

We find out in this week’s episode that Merry’s friend Carla is still alive, but being kept hidden so that Merry is psychologically tormented along with being ostracised by her friends. But Merry finds out too, soon enough, and risks quite a lot to get Carla out of where she has been hidden. Miss Ball is even more of an enemy of Merry’s, after that…

Gail finds out something important about her necklace, and now knows what she needs to do to appease the vengeful spirit Anak-Har-Li that lives in it. Of course getting nearer to her goal isn’t easy, as the spirit seems quite happy to hurt people that stand in its way – and possibly Gail’s Aunt Marjorie might soon count!

“A Dream for Yvonne” develops further on its miserable course – she is picked up by a children’s welfare officer who is sceptical about her claim to have lost her memory, so he takes her to a reformatory, which she will be hard-pressed to escape from. Writing this, I am reminded of the fact that Miguel Quesada also drew Tammy‘s “Little Miss Nothing” – a similar Cinderella story.