Miguel Quesada (1933-2020) drew only one story for Jinty, but his style will be familiar to readers of other girls comics, particularly Tammy. 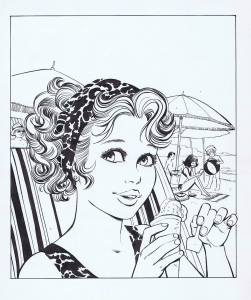 The only story he drew in Jinty was published in the very earliest issues:

He drew a number of covers and stories for Tammy – a list is below:

As can be seen, he drew some classic stories with a wide reach and impact – stories such as “Linda Left-Out” were translated into Dutch and Indonesian, for instance, while “Little Miss Nothing” is cited as the key story of the Cinderella theme that was so prevalent in UK girls comics of the time. He drew for a number of other UK titles outside of the girls’ publications mentioned above: for instance he is also particularly known in the UK as an artist on “The Trigan Empire” as well as having some Dan Dare stories under his belt.

In Spain, Quesada is an important award-winning artist with a long-running career; if you can read Spanish, there is a Tebeosfera entry about him listing the publications that he contributed to prior to his UK work, with some biographical detail. There is also a link on that site to a useful and interesting article on ‘The Spanish Invasion’ written by David Roach and translated into Spanish.

The work done by Quesada for UK girls comics is not amongst his most prominent or well-known but his clean style and ability to draw subjects like ballet ensures he will always have a well-deserved place in the memories of his readers. Here are some pages from “A Dream For Yvonne”, from 1 June 1974. (I originally included the episode from 13 July 1974 but the replacement episode more effectively shows off Quesada’s ballet drawing.)