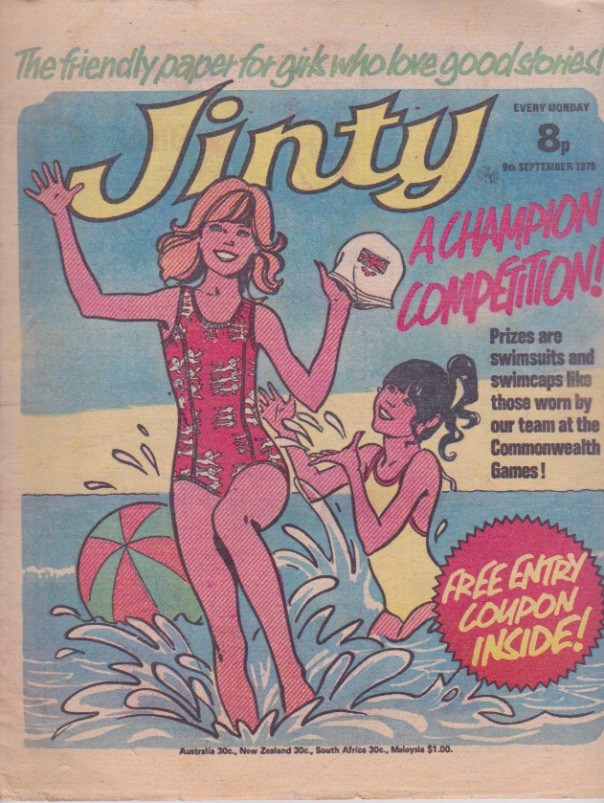 A new competition has pushed all the stories off the cover. The letters page of this issue informs us that popular demand has prevailed and “Fran’ll Fix It!” will return in one month’s time (almost a year after her first story ended). So now we know one story that will replace whatever ends in three weeks, which raises speculation as to what will end.

Della is beginning to find she is beginning to like Winnie after all – and suddenly realising that she does not like the idea of foisting the curse onto her. So Della, who started off as a rather selfish, shallow person, is beginning to change her ways. At least something is coming out of the curse.

The Cinderella theme is now manifest in part two of “No Cheers for Cherry”. Aunt Margot just wants Cherry to do all the donkeywork for her family, who are too selfish and lazy to pitch in to help their theatre barge business. Poor Cherry does not even have a proper bed – she is forced to sleep on the floor in her cousin Michelle’s cabin. Worst of all, she is too naïve to realise that her relatives are exploiting her.

By contrast, Wild Rose now knows how the fairground people have duped and exploited her, and she has run away from them. But they are determined to recapture her for their snake girl act.

With help from Nirhani, Shelley now realises what a dupe she has been as well. There is no “Sisterhood” at all – an enemy has set her up with phoney tests that are actually traps. It’s the turning point of the story, and now they plot to turn things around on the enemy. It’s started with the fourth challenge that was clearly meant to get Shelley expelled. And now the fifth one is here. What nasty setup is planned with this one?

Shona makes friends with Tamsha’s hitherto jealous pet, and now she has an ally. But then she is horrified to see her fellow humans at the zoo being humiliated and abused in the aliens’ version of the chimps’ tea party! And the reference to chimps’ tea parties shows how much things have changed for chimps in our PC times.

Dorrie is surprised to find herself being offered the role of Dorothy in another production of The Wizard of Oz. Let’s hope her being a fugitive doesn’t mess up her chance.

The sale of a priceless ring gets Clancy on the wrong side of her grandfather and then on his good side when she shows signs of his knack for profit. But then Clancy’s health problems begin to plague her again….