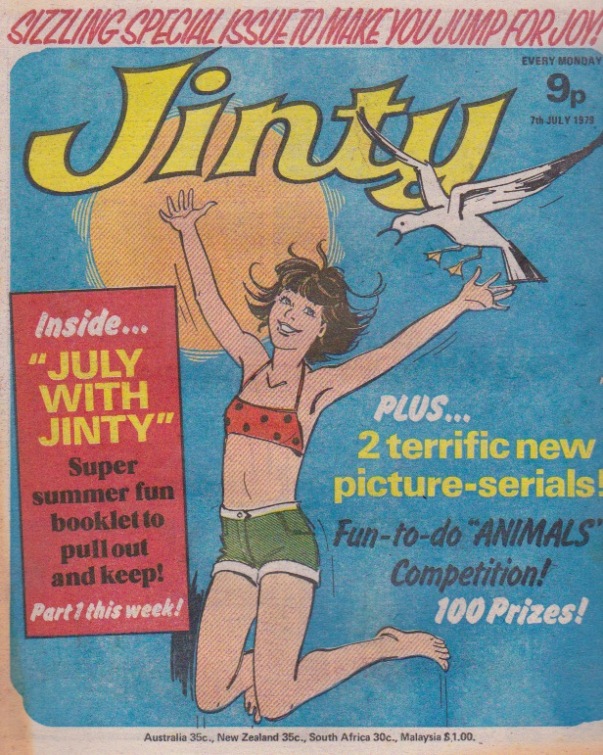 Two new stories begin in this issue. The first, which went on to become one of Jinty’s classics, is “Almost Human”. An alien girl, Xenia, is left to fend for herself on Earth because her own planet is facing ecological catastrophe. But Xenia soon discovers that her alien touch is deadly to any life form on Earth. Talk about being the Untouchable!

The second, “Mike and Terry”, is the Editor’s response to a recent competition in which readers were asked for what they especially wanted in Jinty. Ye Editor was flooded with requests for a detective story, hence Mike Temple (makes a change, having an adult male as protagonist in a Jinty serial) and his assistant Terry (a woman) on the trail of a master criminal known as “The Shadow”. This must have taken inspiration from “The Zodiac Prince”, which had a similar pairing that proved extremely popular.

Meanwhile, Pandora wants to be rid of the cat she was obliged to magically bind to her in order to make her box work because she hates cats. But it looks like she’ll have to learn to tolerate the cat instead.

Maloney thinks the Lilliputians are leprechauns and is out to catch them. And the Lilliput children are in big trouble on a river. Linette’s hatred of Dad’s fans is driving her to run away from home, which can only lead to big trouble for her too. And in “The Disappearing Dolphin”, Paula and Chris are having problems overcoming local hostilities to their expedition. But it looks like they’ve got an ally at last, with something in his boot that can help them.

In “The Forbidden Garden” Laika discovers that destroying Gladvis’s blackmail evidence is now paying off dividends in a most surprising manner. The headmistress Miss Karvell was among the people she freed, and Miss Karvell has been her secret helper in return. (Pity Gladvis is still in business, using her position as prefect to collect more blackmail evidence to use on pupils and teachers alike.) However, the forbidden garden yields a surprise that is not so pleasant – Laika discovers that the plants she had been cultivating for her dying sister are not beautiful flowers but hideous mutants!