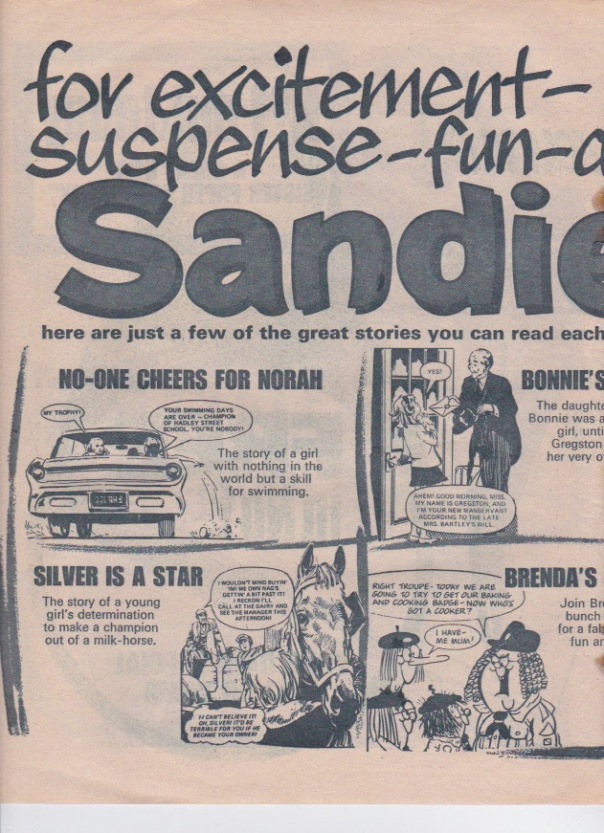 I pulled out my 12 February 1972 Tammy and came across this advertisement for promoting the launch of Sandie. The announcement is unusual for several reasons. First, it is a pull-out. What’s more, you can pull it out without ruining any stories in Tammy.

Furthermore, Sandie is being promoted as a sister comic to Tammy and girls were being urged to get a copy of Sandie when they picked up their Tammys. It sounds like the advertisement was trying to draw not only on the popularity of Tammy but also on the Tammy readership to bolster Sandie sales. Tammy herself was barely a year old when this advertisement was appeared, which makes it all the more surprising  to use Tammy as a means to help launch the new title. It does have you wonder what the June version was like. Was it the same ad or a slightly different one in June?

Finally, Sandie is not only promoting her stories, free gift and competitions to pull in readership, but what’s in her letters pages as well. Sandie says she is going to have two special pages: a letters page (doesn’t every girls comic have one?) and a joke page where readers can earn £1 for each letter or joke published. Yes, all girls comics do have that sort of thing, but the ad does prompt girls to think immediately and get replies as soon as possible.

14 thoughts on “Announcing the Launch of Sandie”