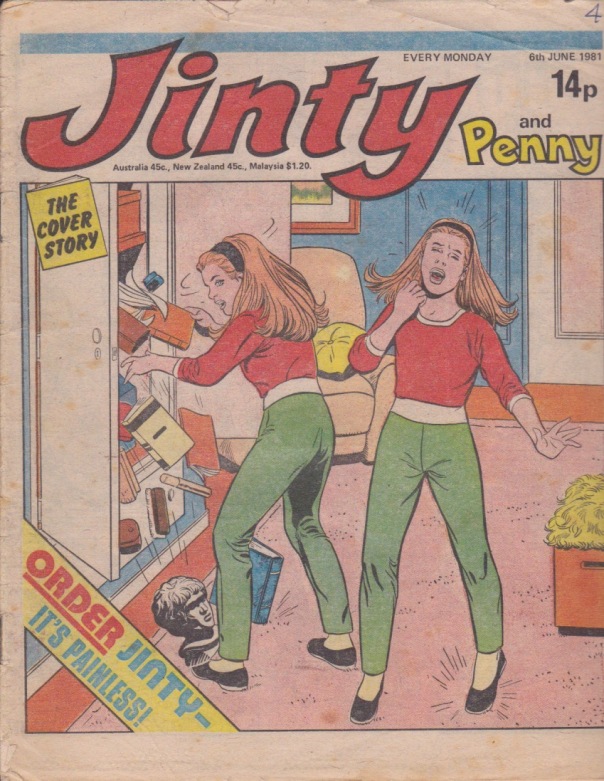 In this issue Jinty has a double feature on Gypsy Rose stories. “The Mysterious Mynah” is another recycled Strange Story, but “The Dove of Peace” is completely new. This makes a nice change from the Strange Stories Jinty recycled in 1981. “The Dove of Peace” looks like it is being used as a filler because Jinty wanted to start the replacements for “Fancy Free!” (ended last issue) and “Diving Belle” (ends this issue) in one issue.

And how does “Diving Belle” end? Belle trusts Betty and her instinct enough to carry out the dive from the oilrig, even though it could kill her. Readers should not be at all surprised when the dive enables Belle to find her father’s bathyscaphe, so he and his comrades are rescued. That’s what this mysterious diving training has been for all along.

In “Worlds Apart” the sports world is getting increasingly bizarre. You don’t sit down to eat – you are expected to eat while playing table tennis at the same time. And of course it’s all health foods, which the girls loathe. School punishments don’t apply detention or lines; they are designed to make girls lose physical fitness. Meanwhile, Ann’s all set to compete in the war against the Soviet Union. But why is Clare hoping Ann’s side will lose?

Pam persuades the school staff to let the girls have a go at woodwork and the boys sewing. However, Pam is the only girl who enjoys the woodwork. Well, she always was a bit of a tomboy, after all. And the boys? The sewing teacher has not enjoyed teaching the boys because they had a great time wrecking the sewing machines!

In this week’s text story, a psychic bond between twins is causing one to feeling the other’s pain, which is rather putting a damper on the holiday one of the twins won. It all gets sorted out, of course.

Sir Roger’s a bit put out when Gaye says he can’t come to the seaside with the family. He sneaks along anyway, which proves fortuitous. He unwittingly scares off some people (car thieves, police and a packed beach) who would have otherwise spoiled things for Gay and her family.

Snoopa’s back this week with a big-headed mouse who boasts he can beat Snoopa at anything. However, when the mouse loses his voice it gives Snoopa the chance to beat him at one game – Snap.

Tansy’s lumbered with a dog that is trying to get out of getting his booster shot. But then Tansy and Simon are just as chicken when it comes to their shots, which are due too.

Matron’s all set to come hard down hard on Sharon, just because an emergency got her caught in her swimsuit instead of uniform. Fortunately the patient speaks up for her and she’s off the hook. The girls discover Lesley’s secret, and wonder what all the fuss was about in her hiding his occupation.