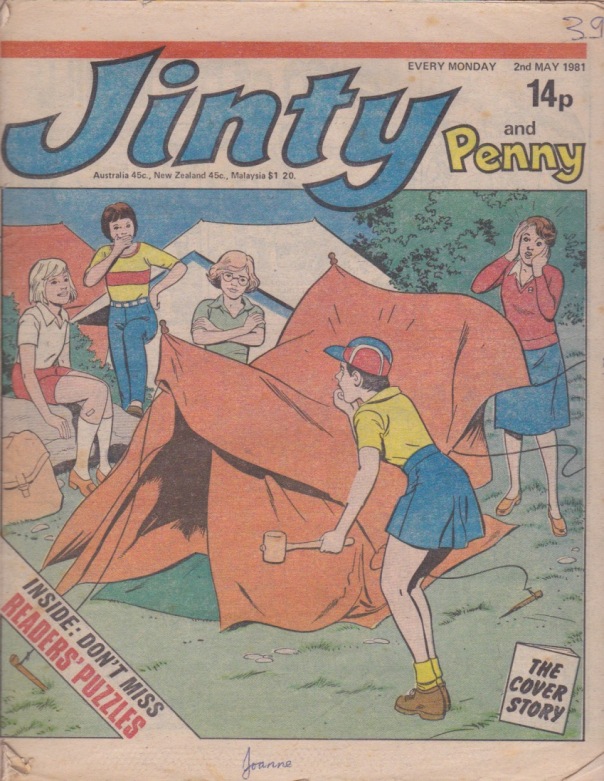 This week’s text story should delight readers who ever met a bully teacher. The appropriately named Miss Bull (which lends itself to “Bully-bonce”, “Bossy Bully” or, most often, “Bully”) runs her sports classes like a drill sergeant. So the girls are dismayed when Bully pushes her way into coming on their half-term camp. However, when Bully shows just how competent she is at pitching a tent, it’s a humbling for her and a huge laugh and relief for all the girls when the Head decides Bully’s not fit to supervise the camping.

Pam strikes problems in raising the money to cover the costs of the school magazine that the “Worms” ripped up. She hasn’t patched things up with Goofy, and we are warned nasty Jill Cook is going to make even more trouble.

Betty’s got a really crazy plan for Belle’s diving training this week – she wants Belle to take the place of a stunt diver at the fairground. Now this looks awfully dangerous for a girl who’s not trained in the stunt, and the stuntwoman has clearly taken years to perfect it!

In “Worlds Apart”, the girls learn the meaning of gavage in this bizarre world where everyone is grotesquely fat, and the fatter the better. In hospital, the girls are force fed until they are just as fat. Only greedy Sarah is enjoying it because it’s her kind of world. Could there be a clue here?

This week’s recycling of a Strange Story in the Gypsy Rose tales treats Jinty readers to some Eduardo Feito artwork. When Clare stops in a small village with her singing group she feels like she’s been there before. Even weirder things start happening when they rehearse in the community hall.

Gaye pulls tricks on Sir Roger with a tape recorder to stop him being so lazy. When Sir Roger discovers the ruse he decides to fight fire with fire, although he finds 20th century technology a bit incomprehensible.

Tansy’s heartthrob pop star is in town, but she’s having trouble getting even a view of him. In the end she goes better than she ever imagined.

Fancy’s mother finally tells her a few facts about her absent father. He’s an escaped convict who claims he was innocent of the crime he went to prison for. He remains at large and his whereabouts are unknown. Ben says he may be able to provide more information.

Helen’s struggling with her nursing and is swotting too hard. The girls give her a book that they hope will help. Later, suspicion falls on Lesley when a patient reports a theft.

Snoopa’s got earache, but wrapping his ear to keep it warm is getting him into all sorts of scrapes.