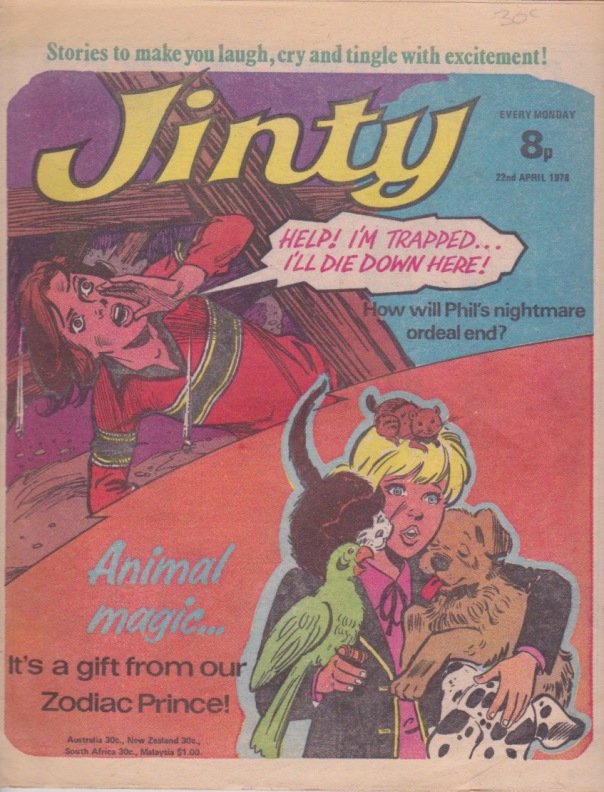 Last week Jean believed she had finally seen through Carol as “a smarmy little creep!” But she repents when Carol really puts on the waterworks. Did she really hurt Carol’s feelings or has the smarmy little creep worked her way around her again? Meanwhile, Jean takes on some advice to bring some rhythm and flow into her skateboarding and is making progress. However, could Carol be trying to discreetly undermine it?

In “Sue’s Fantastic Fun-Bag!” some bullies always pick on a girl and call her names. Naturally, Henrietta decides to give them a taste of their own medicine, which gets a bit out of hand. They end up in detention, but it’s a fitting punishment for bullying.

The Swan has made a slip that she knew the slave’s parents. But she twists it around with another lie: the slave’s parents died in prison for theft and she may have inherited their bad ways. It’s an old trick in “amnesiac” serials and it does what the Swan intended: the slave becomes demoralised and begins to doubt herself.

Carol comes to the rescue of Phil, who’s under a pile of debris. However, Carol seems to be going to pieces because the debris is reminding her of something.

The Zodiac Prince casts a spell on a girl to make her attractive to animals. It was meant to save her from a tiger, but it backfires when every single animal in town follows the girl all the way home, and the spell starts messing things up at the circus as well. Father tells the Prince he can’t remove the spell, so he suggests another to modify the first. But will it work out?

It’s the final episode of “Paula’s Puppets”. Paula’s in a cross-country race but isn’t up to it with nobody to support her. Then, all of a sudden, Dad is there to cheer her on. But he’s supposed to be in prison! What gives?

Linden manages to get the plant to cure Rebecca, despite the Witchfinder trying to stop her by turning himself into the largest rat you ever saw. Next they learn how to stop the Witchfinder – destroy his three magic items – but they have to track them down first.

Cathy thinks her father needs a break and leaves the phone off the hook so he won’t be disturbed. But this could lead to real trouble if there is an emergency…