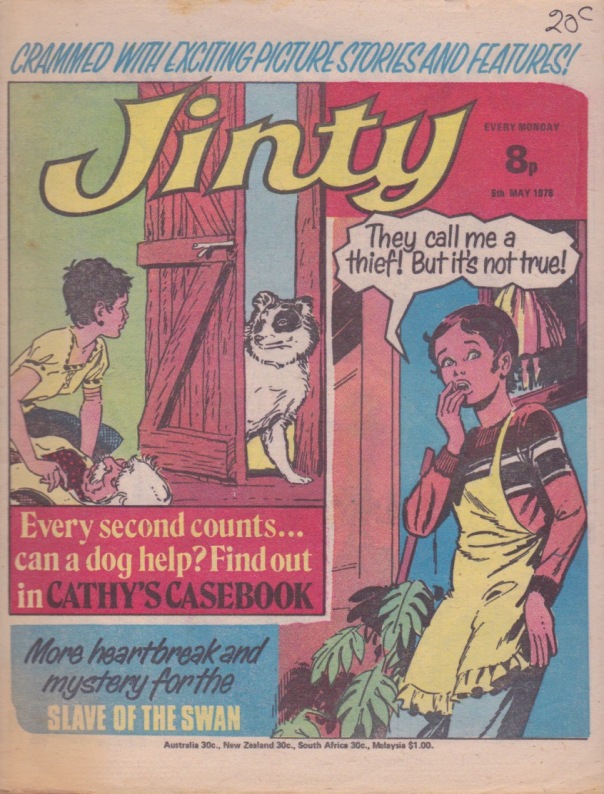 The Concrete Surfer finds sneaky Carol cheated to put up the winning design for their skateboard tee shirts. She’s now so fed up with smarmy Carol being Miss Bainbridge’s pet that she wants to walk out on the skateboard club.

A woman gets on Sue’s nerves with her bossiness and endless spouting of old proverbs, and Sue reckons the woman doesn’t even know what those proverbs mean. Oohh, sounds like an open invitation for Henrietta to hand out another lesson with her mischief-making magic.

The Swan is up to mischief of an even more nasty nature. She’s poisoning her own pupils against Katrina with false stories and sneaky tricks to make Katrina look a thief in order to turn them against her because they were trying to help her. At least Sarah is still friendly and is treating Katrina to a ballet performance.

It’s the final episode of “Waking Nightmare”. Phil realises she should have heeded newspaper reports that Carol was not quite right in the head. But Carol’s mother admits it was partly her fault for concealing it because she was ashamed to let people know her daughter was mentally ill. Phil helps Carol overcome her fear of doctors and everything works out happily.

“The Birds” is on its penultimate episode, and it’s only the second one. There was so much scope to make this Hitchcock-inspired story longer, so why did they just keep it at three episodes?

“Shadow on the Fen” is clearly nearing its end as we’re told the story will reach its climax next week. This week The Witchfinder attacks Mrs Perks, the only ally of Linden and Rebecca. At least they manage to get hold of his book, the second magic artefact they have to destroy to destroy him. However, he managed to get away with his last artefact, the magic knife.

Cathy saves the life of a critically ill man, but the old sourpuss isn’t showing her any gratitude. Dad takes her out for a treat, but there could be a surprise when someone asks if there is a doctor in the house.

The Zodiac Prince is trying to work out what’s upsetting the clown he’s standing in for. Then he and Shrimp find a photograph that could be a clue.