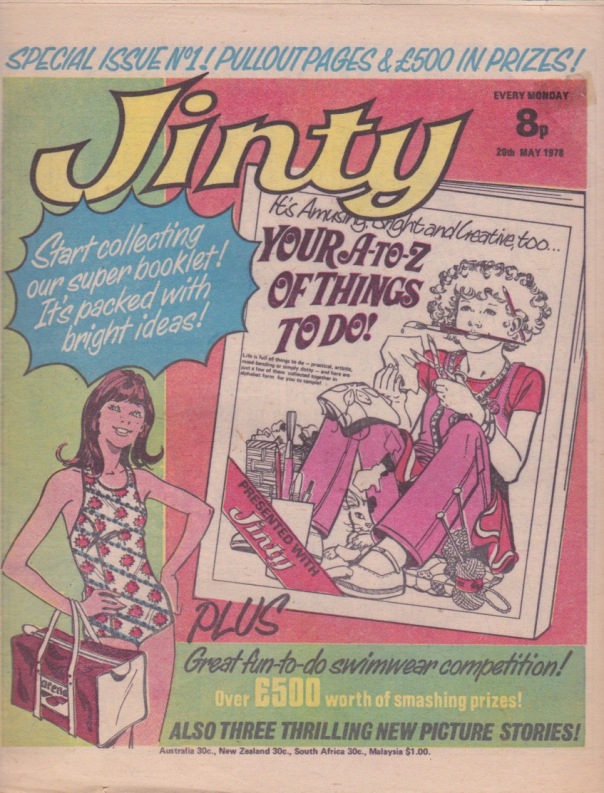 The advertising for Jinty’s new competition and her A-to-Z of things to do has pushed the story panels right off the cover. There’s only a blurb at the bottom to say that three new stories have started. It looks like the pull-out feature, competition and stories have pushed out “Sue’s Fantastic Fun-Bag!” and “Alley Cat” out of the issue; neither appears this week.

The first new story, “Somewhere Over the Rainbow”, pushes “Concrete Surfer” out of her usual slot as leading story. The episode is also a four-pager, which gets it off to quite a start. It seems fitting as “Somewhere Over the Rainbow” went on to be one of Jinty’s most enduring and longest stories. It was the last of the three Jinty serials to be set in World War II. As the story opens, the war is drawing to a close. VE Day is in sight, wartime restrictions are easing a bit, and the Peters family are looking forward to the day when Dad comes home from the war. But of a sudden Mum gets the dreaded envelope that means KIA.

The second new story is “Knight and Day” (a popular play on one girl being named Day and the other Knight in a serial). Pat Day’s mother has always neglected her and she is now happily fostered out to the Hargreaves. But now, all of a sudden, the neglectful mother (now Mrs Knight under her new marriage) has successfully applied to get her back. But why would she even bother?

The artist for the third new story, “Clancy on Trial”, is a surprise. It’s Ron Lumsden, who is best remembered for being the first artist on “The Comp”. Clancy Clarke is determined to walk again after being crippled in an accident and is getting help from her cousin Sandra. All of a sudden, Clancy’s grandfather, who had ignored her before, suddenly takes an interest in her. As with Pat’s mother it sounds suspicious, but at least we get an inkling of his motives – to put her to some sort of test.

In the other stories, “The Zodiac Prince” hands out another astral gift, and this time it works out. Julie is now happily reunited with her father and, thanks to the astral gift, is now joining him at the circus. Unfortunately it pushed out another performer and now she’s jealous.

“The Slave of the Swan” is finally beginning to remember bits of her past. But the Swan is getting set to ensnare her again, and she’s already pulled the wool over the eyes of the police who were getting on her trail at last.

In “Cathy’s Casebook” Dad is hauled up before the medical board on an unfair charge of neglecting a patient, thanks to the old trout of a district nurse who judged him too harshly and wouldn’t listen to pleas that Dad was overworked and feeling unwell. But Cathy makes sure the medical board listens to her over them! The nurse looks veerry sour indeed when Cathy gets the charge against her father dismissed.

“Concrete Surfer” finally catches creepy Carol out once and for all. She tricks Carol into admitting that she stole her skateboard. Not that it would do much good in the competition – Jean can’t compete unless she finds the skateboard.