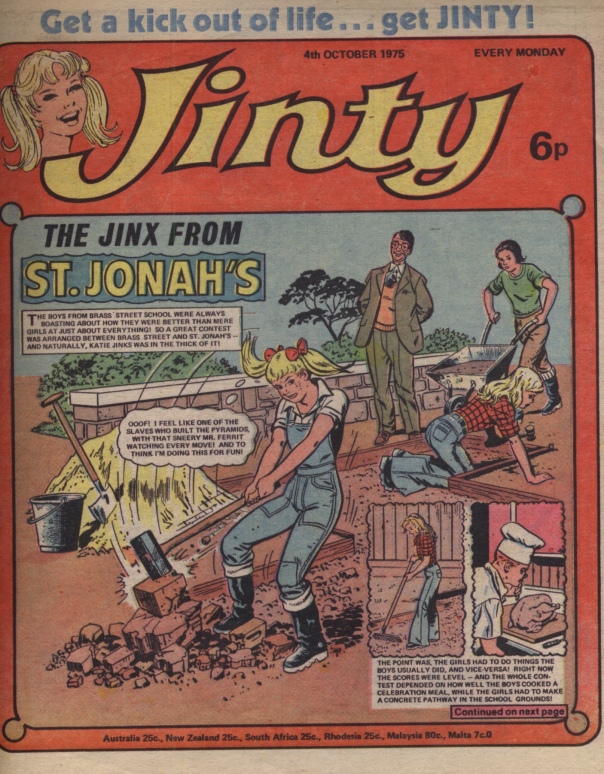 Katie Jinks’s school is competing against the nearby boys’ school, to see who does best at ‘gender-swapped’ tasks – so Katie and pals are making a concrete pathway for their school, and the boys are cooking a cordon bleu meal, which the victors get to eat! Of course, her equal-opportunity jinxing sees her ruining the chances of both groups equally – the boys win, but Katie’s antics end up with the boys locked in a store-room unable to eat their fine supper – so naturally the girls have to self-sacrificially eat it up… The tagline for upcoming stories advises readers that ‘there’s a long story starring Katie in the new Jinty Annual‘ (which turns out to be drawn by Audrey Fawley rather than Mario Capaldi).

Ballerina Barbie gets a shock as she is dancing before an audience – her sight returns and she can dance with more joy than ever! But she isn’t able to get to her sister quite in time to see the beloved face that she hasn’t seen for so many years.

Lucy and Yvette need to come up with a cunning plan to save Corn Dolly from the prison that Miss Marvell has put her in – the doll is powerless herself, surrounded as she is by black magic items in the local museum. But the brave and resourceful girls swop the doll for a very similar one that they have bought. Miss Marvell is fuming once she finds out of course, and threatens that ‘next time, there will be no half measures!’.

Debbie is stunned at the next request that Mrs Maynard makes – to bring her £100! A huge amount of money for the poor girl, of course, representing the entirety of her winnings at the talent contest. And she’s already spent her winnings, too! She sadly goes round returning the items she’d bought, but meanwhile her cruel family come up with ways to stop her from giving the money to Mrs Maynard. Will this mean that Debbie can never see her kind, if odd, mentor again?

Per and Solveig are still being pursued by Grendelsen, with much trekking through the woods. There’s natural dangers in the woods as well as Nazi stalkers though, as the kids are threatened by a wild boar and by a fierce dog too.

“The Green People” comes to an end this week. Moura’s aunt Zella has betrayed the peaceful underground people in a pact with the surface dwellers who want to build a motorway on the moor – but she finds that the dangerous monster Krakengerd is not as easy to control as she had thought. All ends well and the green people’s secret – and their lives – are safe.

“Barracuda Bay” sees Susan Stevens captured and trapped underwater, with her air running out. Will her partner Martin find and rescue her in time? This thriller is slightly old-fashioned in style and quite reminiscent of the Sandie story “The Golden Shark”, which also is a diving-based thriller with a female lead who has good hair. The art on “Barracuda Bay” is much tighter and more neatly-finished, though less obviously by the same artist as “The Haunting of Hazel” (which starts in the next issue). “The Golden Shark” gives a much clearer artistic link between the two stories that were reprinted in Jinty, which I was slightly surprised by.

Finally, “Ping-Pong Paula” has Paula suffering from lack of sleep, in the dodgy digs that her mother has dragged her to. Paula’s dad can support her table-tennis playing better, but of course her mother is bound to find out and to use it as more ammunition in the parental war.