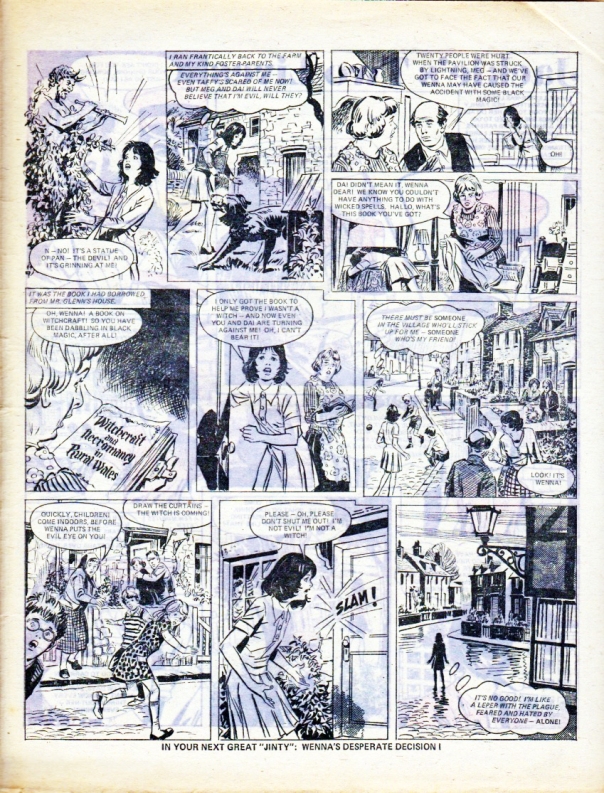 Wenna Evans (formerly Lomax) is the foster-daughter of the Evanses, who live in the Welsh village of Llarygg. It is a village where the locals still believe in witches. Still, that has never been a problem for Wenna. She has always seen herself as a girl like any other, and so do the villagers.

But all that changes when a stranger named Mr Burr arrives. He declares in public, right in front of the villagers, that he is looking for Wenna Evans because his research has uncovered that women in her Lomax ancestry were burned at the stake for witchcraft. (More likely they were victims of ignorance, superstition and persecution, probably because they possessed psychic powers of some sort.) Mr Burr thinks Wenna may have inherited the powers and asks her, right in front of everyone, whether she has ever noticed anything unusual about herself, particularly any “dark stirrings” or even visions? Now either this man has absolutely no tact or common sense, or he’s as ignorant and superstitious as the villagers themselves. Of course Wenna is absolutely outraged and yells at him to go away and not come back. As Mr Burr leaves he has a bad accident, and the villagers think Wenna put a curse on him.

So now the villagers think Wenna is a witch and the persecution begins. Her worst enemy is Blodwen Hughes, an expelled schoolgirl who has always been jealous of her. Blodwen’s job in a village shop is the perfect vantage point for her to spread the gossip about Wenna and fan the flames as much as she can. They get inflamed even more when Blodwen is taken ill and says Wenna put the evil eye on her.

Bad things happen one way or other and they are blamed on Wenna. Unfortunately some of them look a bit uncanny, such as when Wenna is surrounded by an angry mob while at the water pump and wishes for them to be swept away – and then jets of water shoot out of the pump, which drives them off. They all blame Wenna’s witchcraft, notwithstanding that their stone-throwing ruptured the pump in the first place.

There are actions Wenna takes that do not help matters. She borrows a book on witches to help her better understand what she is faced with. But when word leaks out it fuels the rumours against her. Wenna goes to the Gallows Hill, which is shunned and feared because it is said to have druid powers. She calls upon the ancient druids to grant her wish to make the villagers stop persecuting her. Unfortunately the villagers see her and accuse her of casting a spell that causes an accident.

At times Wenna herself wonders if she has powers, and there is evidence of it too. Mr Evans tells her that her ancestors were a strange lot and her mother was said to have second sight. Just before the encounter with Mr Burr Wenna had a vision of herself looking absolutely terrified. During the night she had a vision of Mr Burr’s operation and wished for his recovery – and next day she hears he had a miraculous recovery at the time when she wished for it. There are moments of anger where she wishes the villagers would be swept away or suffer in some other way. Then either something happens or she has visions of something happening, and she’s full of doubt about herself and wondering if the villagers are right after all.

Wenna has some friends, in the form of Myfanwy “Fan”, her dog Taffy (thank goodness Taffy isn’t a cat, or the villagers would persecute him as much as Wenna!), her foster parents, and Dr Glynn the village doctor who sticks up for her and chastises the villagers for their stupidity. As the persecution intensifies Wenna gets banned from school because parents won’t allow their children to attend while she’s there, and she gets shunned in the street, with doors slamming on her everywhere. Angry villagers tell Wenna’s foster parents to throw her out or suffer themselves, which forces Wenna to run off at one point. It escalates into a stone-throwing mob trying to drive her out of the village.

Meanwhile, there has been heavy rain that is showing no sign of abating.

The violence drives Wenna back to Gallows Hill, where she thinks she will be safe because the villagers are too scared of the place. She falls asleep and has an ominous dream of villagers being drowned in floodwaters from the heavy rain. Next day Fan comes to warn her that the villagers have guessed where she is and are coming after her, despite their dread of Gallows Hill. Wenna escapes by taking a tumble down a ravine called Devil’s Gullet, where she stows away aboard a truck. The villagers are baffled by her disappearance (for the time being).

The truck is going to the dam, which is in danger of bursting. Wenna overhears the engineers saying that if the dam breaks the water will flood Devil’s Gullet. They think the dam is holding – just – but when Wenna tries to cross the dam to get away from her enemies she discovers it is beginning to burst. She has more visions of the village flooding and villagers drowning in the floodwaters.

Wenna informs the engineers that the dam is bursting, and she decides to put aside all the things the villagers have done to her in order to help them. They all head to the village to warn the villagers. They pass by the witch-hunting villagers at Gallows Hill, who have now realised Wenna went down into Devil’s Gullet. The mob goes down after her, too crazed with witch-hunting fervour to heed the engineers’ warnings that the ravine is going to flood. Wenna goes down after them and, pretending to be a witch, scares them into going back up the hill and away from the floodwaters. Unfortunately she does not make it herself and the floodwaters carry her away.

Back on the hillside, the engineers tell the mob Wenna actually saved their lives by scaring them out of Devil’s Gullet, and it was Wenna who raised the alarm about the damburst. The engineers then do what they can to mitigate the flood damage to the village.

The villagers change their minds about Wenna when they learn how she helped save the village. They are stricken with remorse and think they have driven her to her death when they find her washed up in front of the village cross. However, Wenna is still alive and Fan says it is a miracle. When Wenna recovers, the villagers greet her with apologies, smiles and flowers. Even arch-enemy Blodwen has come around and says Wenna has powers to work small miracles. Wenna comes to accept that she may have inherited genuine powers from her Lomax ancestors, but everyone knows she will use them for good.

Lingering witch-beliefs in some rural areas of Britain have formed the basis for a number of girls’ serials where the protagonists are persecuted by villagers who still believe in witches. The formula was not used much, but some stories that had it include Mandy’s “Bad Luck Barbara” and Bunty’s “Witch!” Jinty ran two serials with the formula, the first being Wenna and the second being “Mark of the Witch!”.

Wenna is in line with the typical formula of the villagers believing the protagonist is a witch because of her alleged ancestry. How it starts is so astonishing as to be unbelievable. Nobody ever thought Wenna was a witch until Mr Burr comes barging into the village, tells people he has discovered she is descended from these executed Lomax witches, and then starts questioning Wenna right in front of everyone about what powers she has. What the hell was this man thinking? At best he’s incredibly stupid and tactless, not to mention rude, and deserves to get his face slapped. At worst he too is a witch believer who deliberately stirred things up against the girl he believed to be a witch. Whatever his motivation, the damage was done.

It is a common thread in the formula for odd things to happen to the protagonist (nightmares, visions, voices in the head, shouting at persecutors and then things happen to them) that have her wondering if she does indeed have strange powers. However, in Wenna it is more overt, such as her visions of villagers drowning. In similar serials, such as “Witch!”, these weird occurrences are usually kept more ambiguous in order to leave scope for readers to make up their own minds. But of course none of these things happened before the persecution started. And presumably they abate after the persecution ends.

Wenna has more support than most of her counterparts do. Usually there is only one person who sticks by them, but they don’t always do so for the duration of the story as Fan does. Sometimes they abandon the protagonist and go over to the other side, as in the case of “Witch!”. However, in this case Fan not only sticks by Wenna but so do the foster parents, Taffy the dog, and the doctor.

The resolution of the story – the villagers change their minds about Wenna because of her heroism in the flood – ensures a happy ending, if not a realistic one. When witch-believers brand someone a witch the label sticks, if not extremely hard to remove, and casts a long shadow. For this reason the endings to “Bad Luck Barbara” and “Witch!”, are more realistic, where the protagonist leaves the village with the villagers still hating her.

Wenna is notable for two things. First, it was the first Jinty story drawn by Carlos Freixas. Two more Freixas stories followed: “Slave of the Mirror”, which replaced Wenna, and the best-remembered one, “The Valley of Shining Mist”. Second, it was the first Jinty story to have the protagonist narrate the story herself. The only other Jinty strip to do so was “Pam of Pond Hill”.