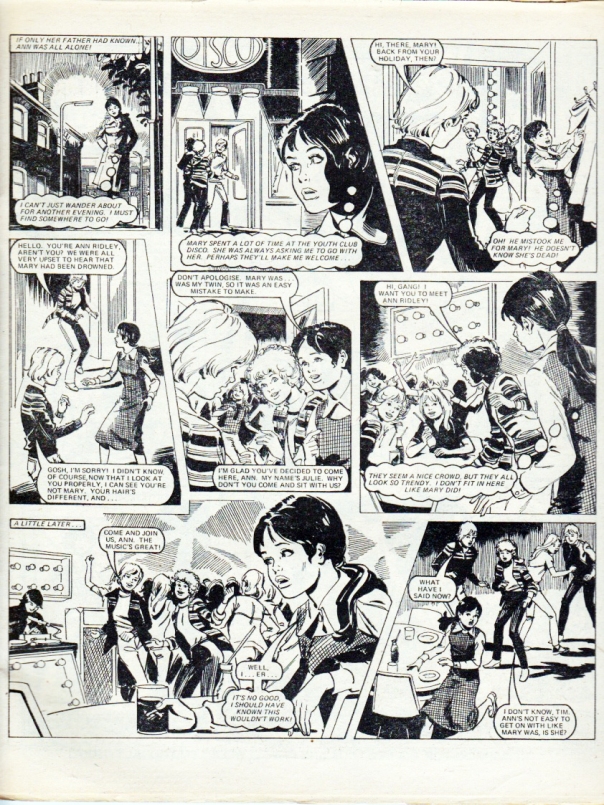 Ann and Mary Ridley are identical twins but a contrast in personality. Mary is an outgoing, confident extrovert and has lots of friends, while Ann is a quiet, shy introvert and doesn’t find it easy to make friends. At a seaside holiday at Westsea Mary tries to bolster Ann’s confidence by improving her swimming to the point where she can swim in the sea. But it all goes tragically wrong when the sea gets choppy. Ann panics and unwittingly pushes Mary under, and she gets hit against a huge rock. Dad manages to save Ann, but Mary dies.

On the night of the funeral Ann overhears her grief-stricken parents lamenting. She gets the wrong impression that her parents wish Mary had been spared instead of her because Mary had been the confident one and Ann the ‘dull’ one. Ann also blames herself for Mary’s death, and feeling guilty that she survived while Mary did not when Mary was the more ‘deserving’ one. Now Ann thinks she must make things up to her parents by being like Mary, as if she were still alive.

So Ann starts resurrecting Mary by adopting her hairstyle, clothes and activities. But of course it just creates trouble for herself. When Ann changes her appearance to look like Mary she thinks it’ll please her parents so much to see this. Instead, she has her grief-stricken parents thinking they’re seeing ghosts and they are utterly shocked. And Ann thinks the shock is to her being dull old Ann instead of the real Mary, not that she’s reopening the wounds of their grief. The parents don’t find it easy to get used to Ann looking like Mary, and they can’t understand it at all.

Meanwhile, Ann doesn’t understand that she is trying to be someone who was total opposite of what she herself is. Moreover, she still lacks confidence in herself and does not have the skills that Mary had, including how to handle bullies. As a result, Ann starts falling foul of Mary’s old enemy, the spiteful Beryl. Beryl keeps causing trouble for Ann at every turn, such as wrecking a party Ann holds at home. On another occasion she ruins things for children at a play centre, puts the blame on Ann and gets her banned from the Youth Club. Beryl is sorted out eventually and gives no more trouble.

But it’s not just Beryl that’s the problem. Ann’s every attempt to be like Mary just seems to end in failure and she keeps landing in one scrape after another. Sometimes it’s not even her fault, such as when classmate Laura rigs the voting so Ann will become class captain as Mary had been. When Ann tries to stop this, she ends up being accused of cheating. Misunderstandings erupt as well, such the class wrongly accusing her of sneaking during a field study course when in fact she was trying to warn them, but it went wrong. On the same course Ann freezes up while Laura is drowning because it’s brought back the memory of Mary drowning. In the end Ann is removed from the course in shame, and thinking she has failed in what her parents want out of her.

None of the disasters shake Ann out of her misguided thinking. She thinks it’s because she’s still the same old boring Ann, she is failing to become like Mary, and is not pleasing her parents in the way she thinks they want to be pleased. Instead, it looks like she’s just letting them down in that regard and they’re getting even more heartbroken because of it. And it is not helping that a lot of people, including the parents and classmates, compare Ann unfavourably with Mary when she lands in trouble.

There are some positives to it. Ann starts making friends among Mary’s old friends, particularly Julie, Tim and Sharon at the Youth Club, and the vicar who runs the place, and Laura and Karen at school. She also develops confidence at things she had never tried before, such as becoming more proficient at cycling and disco dancing. Ann even finds herself as the lead in a theatre production – only to freeze up at the actual performance.

But on the whole it looks like one big colossal failure and disappointment. Eventually, Ann’s increasing frustration her constant failure to ‘make up for Mary’ reaches breaking point. She snaps at her classmates at how they all think the wrong twin was saved, that she’s tried so hard to be like the clever and popular Mary, but she’s failed. Then she runs home from school. Her friends, teachers and headmistress realise something is seriously wrong and that Ann is trying to be like Mary for some reason. They decided to go see her parents.

Meanwhile, Ann overhears her parents considering a move and mistakenly thinks it’s because of her disasters. It’s the last straw in her failure to ‘make up for Mary’. She goes back to Westsea and the scene of the accident. Tim and Julie see her head out there and report this to the parents, who are in consultation with the others from school. Surmising that Ann is blaming herself for Mary’s death, they head after Ann in the car, and they arrive just as Ann dives into the sea and is on the verge of drowning as well because the sea is so rough. Ann is surprised when Dad saves her because she didn’t think she was worth that. They clear up what Ann misconstrued; they love her just as much as Mary and they wished Mary had been saved as well as her, not instead of her. They also insist Mary’s death was just an accident and Ann should not blame herself. Ann realises she has gained some things from trying to copy Mary, such as new friends, but she is going to be herself from now on.

Here we have another Alison Christie story where grief has consequences that go way beyond the tragedy itself when it causes the protagonist to develop a flawed attitude. In this case it’s motivated by love (pleasing the parents), not selfishness, anger or revenge. But there are feelings of guilt and inadequacy all tangled up in it as well. So Ann is a more sympathetic character than Stefa from “Stefa’s Heart of Stone”, who closed her heart to love and didn’t care who she hurt in the process.

However, from the beginning we know Ann is as misguided as Stefa, both in what she is trying to do and what she thinks it will accomplish. It will not only lead to trouble but also make things even worse for herself and her parents because it will only serve to compound their grief over Mary. In fact, it almost leads to Ann meeting the same fate as Mary.

This is a story with “be yourself” and “don’t try to be something you’re not” morals too. Ann is trying to be something she simply is not, and no matter how hard she tries, she can never replace Mary. This is the real reason why Ann’s every bid to be like Mary ends in disaster, though the nasty Beryl and misguided interference from school mates are not helping either.

In some ways it is also a story where a shy girl begins to grow by developing skills, new experiences and bids to make friends that she had never tried before. But it’s a perverse route because she’s going about it the wrong way and for the wrong reasons. As a result, her confidence keeps being knocked back and she thinks she’s still her dull old self who never amounted to much and can’t make up for her sister. But once Ann stops trying to be like Mary, she does realise the growth she has achieved. We sense Ann isn’t going to go back to her old wallflower stay-at-home self. It’s going to be a new Ann, the real Ann who has discovered the gains she has made.