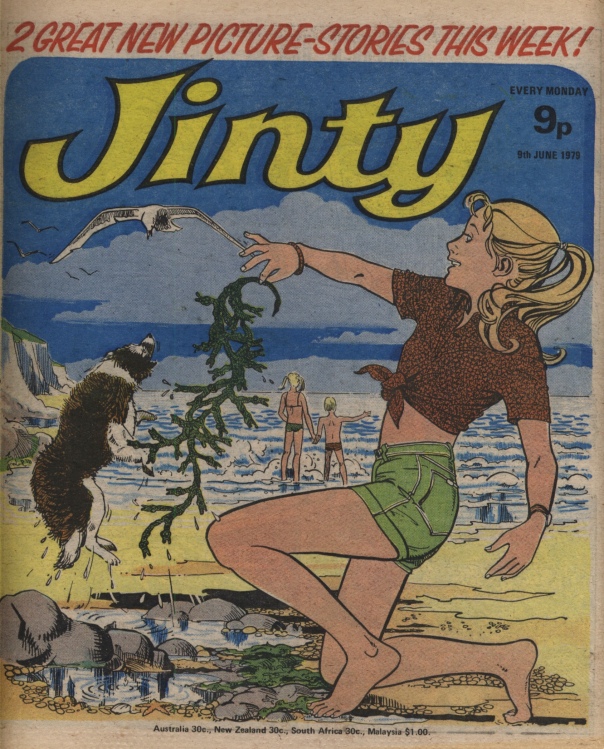 This is a time when Jinty seems to be finishing some particularly good stories – “Alice In a Strange Land”, “Children of Edenford”. This issue sees the start of tear-jerker “Nothing to Sing About” – another heart-tugger created by the joint talents of Alison Christie and Phil Townsend – and of the amusing but fairly light-weight “Pandora’s Box”. Next week sees the first episodes of “Casey, Come Back!” – another tear-jerker, drawn by the unknown artist who drew “Merry at Misery House” – and “The Disappearing Dolphin”, a mystery story beautifully drawn by Trini Tinturé. All are good, but none quite match those immediate predecessors.

“Alice” ends with a four-page episode that takes Alice out from the crumbling rocks threatening to crush her, to a reunion with her friends and a reconciliation with her cousin Karen. “I’m proud to be your cousin, Alice! I hope you can forgive how badly I’ve treated you in the past and let me be your friend?” Karen’s parents still need to understand the changed relationship but eventually all is resolved. The tag line at the end tells us that “Alice has deserved her happy ending. Next week, meet ‘The Disappearing Dolphin’!” In fact, the subsequent cover mostly features that story but the lead spot at the front of the comic is taken by “Casey, Come Back!”.

“The Forbidden Garden” is picking up the pace: Laika is told that someone has reported her as being of superior intellect, which means she is saved from the Industrial Zone where the rest of her family will just rot away their lives. Her old friends can’t afford to stay friendly with her, because if Laika makes any complaint about them, they will be severely fined, even imprisoned! The only bright side is that she can get back to her garden and tend to her plants – but even they are a source of fear, because surely they are growing much too fast? There must be something strange about them!

“Nothing to Sing About” starts off with 12 year old Linette Davis following in the footsteps of her beloved, popular singer father. By the end of the first three-page episode, her father is dead, and Linette is cursing the fans who she blames for killing him, by crowding round him too much!

It is the last episode of “Daughter of Dreams”. In this four-pager, Sally realises she can be brave after all, when she has to act without thinking – and her imaginary friend Pauline has a hand in making everything come out right, too. We are promised another Pauline Starr story later, so it looks like this was intended to be a long-running character feature. In the end there were only two stories featuring this duo.

Laura and her mum have to go and visit the slums that Laura’s friend Josie used to live in – Laura thinks this will change her mum’s mind now that she has seen how badly folks need re-housing, but not a bit of it, of course. In fact Laura’s mum purposefully gets Josie’s dog Riley lost, leading him into danger with the dog catchers.

Finally, it is the first episode of “Pandora’s Box”. Pandora is stubborn and conceited, but in for a shock – it’s bad enough her aunt suddenly claiming to be be a witch and telling her that she has to follow the family tradition of learning the ‘wisdom of witchcraft’ but her aunt is also claiming she has no drama talent and won’t succeed without the witchcraft! Of course Pandora is determined to prove her aunt wrong – but can she resist the temptation to use magic to make her path smoother?