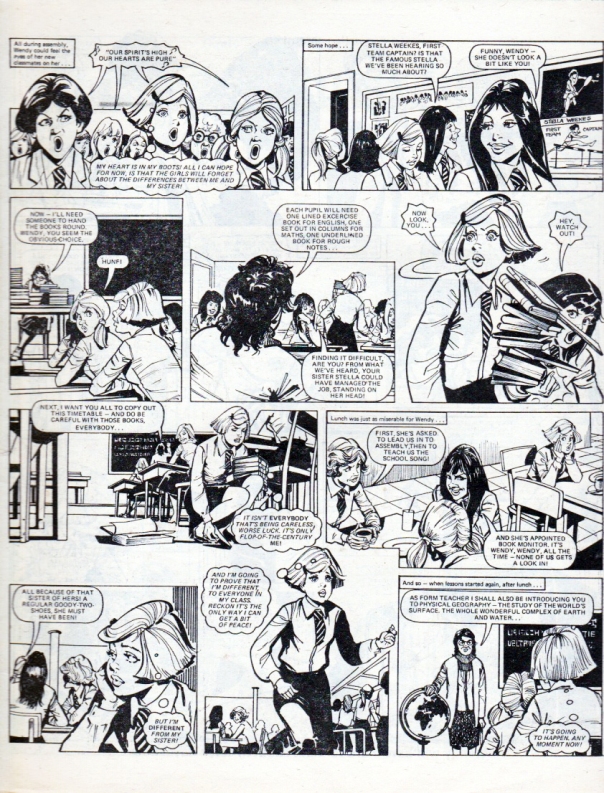 Stella Weekes is a girl born with the golden touch. She comes out top at everything she does, she is always a winner, and she has never lost at anything. At her old school Gatecombe Comprehensive, Stella was the star pupil and even the headmistress virtually hero-worships her; there are displays of Stella’s school achievements everywhere. Now Stella is the star of a TV sports series, Goldengirl. Stella’s parents just never stop bragging about her and they “kill the fattened calf” for her whenever she shows up.

This causes huge problems for Stella’s younger sister Wendy when she starts at Gatecombe. Wendy has grown up in the shadow of Stella’s success, and at Gatecombe she becomes overshadowed even more. Everyone, including the school staff and Wendy’s parents, expect Wendy to be another Stella and keep comparing her with Stella. On Wendy’s first day alone, she is constantly embarrassed and humiliated because the school staff make a huge fuss over her, push her to the front at everything, and give her all the plum roles and expect her to be just as brilliant at doing them as Stella. The headmistress even compares Wendy’s appearance with Stella’s – and it’s not a favourable comparison either. They only see Wendy as “Stella’s sister” instead an individual, and they expect her to be just like Stella. At home, Wendy’s parents, who are just too full of pride about Stella, are just as bad at expecting Wendy to be just like Stella. At least they do it in a somewhat more light-hearted manner. But they are too consumed with pride over Stella to even take in interest in what Wendy tries to do or lend her any support. For the parents, Wendy always takes second place to Stella. Nobody will respect Wendy for herself.

But Wendy does not have a golden touch like Stella. She suffers from poor self-esteem because she is being constantly expected to follow in Stella’s footsteps when she considers herself the opposite of Stella. Worse, it does not take long for the other girls to pick up on how Wendy pales in comparison to her sister. They understandably resent how the big fuss over Wendy is not giving them a chance, while not understanding that Wendy does not like it any more than they do.

As a result, Wendy becomes a target of bullying, with the girls constantly teasing her because she isn’t living up to Stella’s reputation while all adults around her keep expecting her to do so. Wendy’s worst enemies are Angela and Honey, who also like to play dirty tricks on Wendy whenever she tries to prove herself, so as to make her the laughingstock again. Furthermore, they have the whole class send Wendy to Coventry and they call her “weak sister Wendy”. Even their families get in on the act; Angela’s brother Adam helps them play a trick on Wendy to get her into trouble with the headmistress. There seems to be no limit to their bullying; at one point they cause Wendy to take a fall during a bar exercise and land on top of the gym teacher, and then they have the nerve to blame Wendy when the teacher has an attack. Fortunately for Wendy, the doctor sorts them out. At least there is one person who is sticking up for Wendy, but nobody else is there to talk to the parents or help sort out the bullies.

Following a misunderstanding, Angela and Honey think Wendy tricked them out of their chance to meet their heartthrob Gregg Vanderley, who is Stella’s co-star. After this, their spite grows even worse. They try to frame Wendy for stealing exam papers. When this fails, they trick Wendy into an old tower and intend her to have a nasty accident. Wendy breaks her wrist because of this. The doctor has her stay off school until further notice.

But even while laid up in bed with a broken wrist, poor Wendy gets no respite from being constantly compared to her sister. Instead of offering sympathy, Wendy’s mother scolds her for missing out on the end-of-term school exams because of her injury while Stella always came out top in them.

While in bed, Wendy ponders over another thing she has noticed: Stella has not contacted her family of late, not even when she was in the neighbourhood recently with Vanderley. Also, the TV network is running repeats of Goldengirl instead of the new season, which Wendy finds strange. So Wendy takes advantage of her remaining time off school to go to London and do some investigating.

Wendy’s suspicions are confirmed when she discovers Stella has lost the Goldengirl job and been evicted from her exclusive flat because she could no longer afford the rent. At the TV studio Wendy learns Stella became a victim of her own success: viewers got bored of her because she kept winning all the time, so she got replaced. From the wee glimpse we see, Stella’s replacement is struggling with confidence as well, which explains why the new season has not screened.

Stella disappeared instead of going home because she was too afraid and ashamed of her parents’ reaction. At Vanderley’s suggestion, Wendy investigates a derelict house other out-of-work TV actors are using to squat in. There she finds Stella, who is working at a grotty café for an obviously very low pay.

Despite the depths she has sunk to, Stella cannot bear the thought of going home and facing her parents, or what people are going to say behind her back. But it is here that Wendy finds a whole new confidence when she persuades Stella to do so. She gets very bold and assertive in not taking “no” for an answer and insisting on taking Stella home. And screw what people are going to say; Wendy loudly describes what she has been through at school to illustrate that if she can put up with that sort of treatment, Stella can too. Stella listens, and begs Wendy to go on helping her. Wendy does more in that regard when their prideful parents start whining about what the neighbours will say when they hear what happened. Wendy retorts, “Bother the neighbours!” She describes the situation she found Stella in and says, “Would you rather I’d left Stella where she was, Mum?” The parents are humbled at this and offer comfort to Stella. Once Stella recovers, she becomes determined to work her way out of her bad patch.

Then Stella expresses concern about the bullying Wendy is experiencing at school and how it is bound to get worse once the bullies hear about her losing the Goldengirl job. Wendy, emboldened by her new assertiveness, says she has the confidence to deal with them now.

Sure enough, Angela and Honey get a real surprise when Wendy returns to school. When they try to bully Wendy over Stella’s dismissal, she comes right back at their teasing. She also threatens to go to self-defence classes if there is any more of their bullying (a bluff). To reinforce her point, Wendy pulls an arm lock on Angela that Stella had taught her. Angela and Honey are humiliated, especially when the other girls begin to laugh at Angela’s humbling. Wendy can only hope things will now be better.

This is a Tammy story I have come to appreciate more upon revisiting it. It’s not that I disliked the story initially; it’s just that I was more taken with other stories in Tammy at the time.

Girls’ comics have frequently run stories where a girl suffers because she is compared unfairly and unfavourably with a more successful sibling, or, in some cases, a parent. This one is a bit different than most. The more common formula is for the protagonist to constantly strive to prove herself and win some respect, which she eventually does with some talent she discovers or an act of heroism (e.g. “Make the Headlines, Hannah!”, also from Tammy). Of course things don’t go smoothly and she frequently comes up against an enemy who is always trying to sabotage her.

This serial has that theme, but runs it to a slightly lesser extent than most. And the ending breaks the formula completely. The heroine does not prove herself at long last with some talent/heroic act, winning respect and everything ends happily. Instead, Wendy gains confidence by learning to stand up for herself. This starts with standing up to the sister who has always overshadowed her, and using everything she has short of physical force to stop hiding in that miserable run-down hovel, come home, get back on her feet again, face up to those parents of theirs, and deal with what people are going to say about her. Wendy’s new assertion continues with the parents when they start to whine about what others will say, and it gives her a whole new confidence in standing up to the bullies. And instead of school changing overnight for the protagonist, which is the more common ending, the story ends on the hope that school will improve for Wendy, but whether it does so remains to be seen. This is a more realistic ending that avoids the clichéd “new improved school ending”, which makes a very nice change.

It is easy to understand why Tammy went with this ending when we examine Wendy’s home life. Having Wendy prove herself somehow just would not have been enough, because the parents were just too consumed with pride over Stella to even notice what Wendy does. They need to have that pride of theirs deflated before they start taking Wendy more seriously. And they get it when they find out about Stella’s job loss and Wendy tells them off for thinking about what people will say about Stella’s downfall instead of thinking about Stella and what she is going through. We sense that they will become better parents to Wendy after this.

Stella, too, needed a lesson. There is no evidence that Stella’s success turned her into an insufferable big head, which has happened in other stories e.g. “Last Chance for Laura” from Bunty. But she was squandering her salary on high living instead of using it wisely. Further, she had never developed the emotional and psychological tools to deal with failure because she had not encountered failure until she lost the Goldengirl job. Wendy’s whole new assertiveness not only saves her from the miserable squatting but also helps her find the courage and inner strengths to rise above her bad patch. In so doing, we sense Stella will emerge an even bigger success than ever because she gained strength, new coping skills and lessons from that bad time.

Stella had also neglected Wendy because she was always too busy. So Wendy rescuing Stella and helping her to get through her trouble would definitely get Stella finally paying more attention to Wendy. Stella in turn becomes the one to help Wendy stand up to the bullies, by teaching her self-defence techniques, and being a more thoughtful sister towards her.