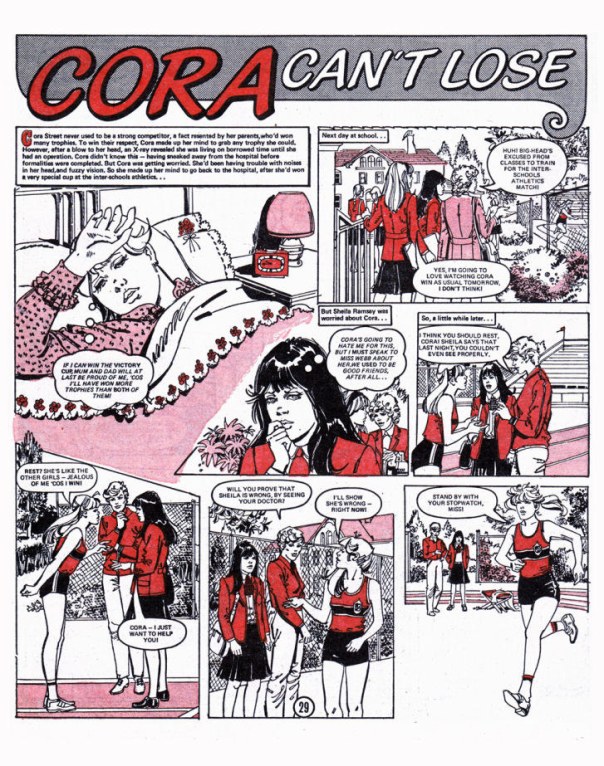 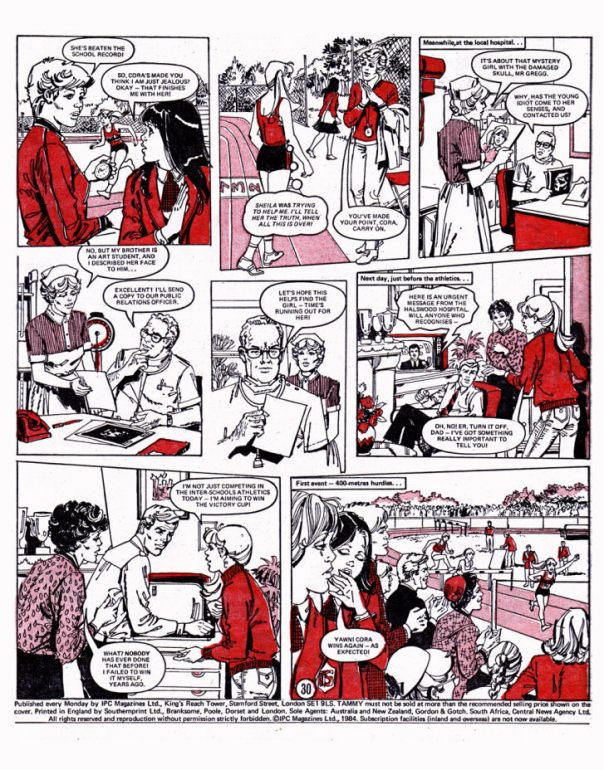 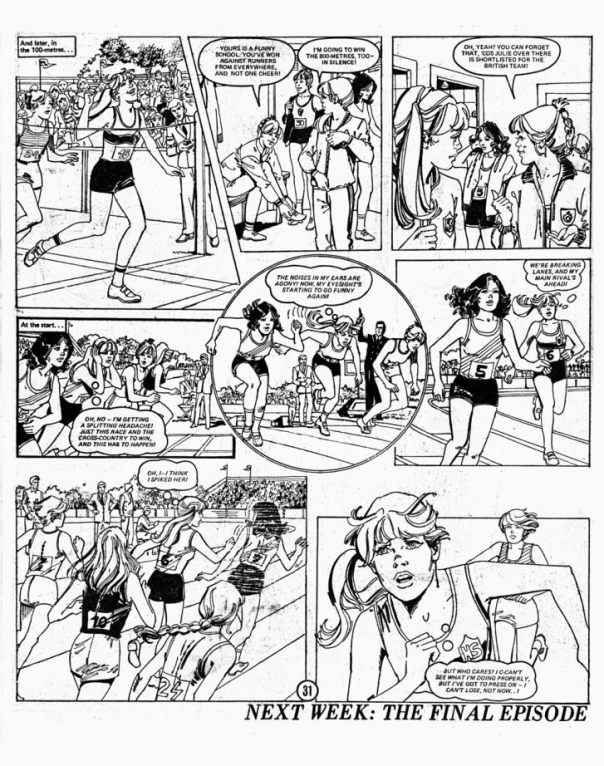 The presenter, Lady Sarah, is puzzled as to why only Cora’s parents are applauding. Not even Cora’s own school is doing so. The girls mutter that it’s all such a drag because Cora always wins. Winning is all she cares about, and this has made her unpopular at school. One of the girls then says she can remember when Cora didn’t win anything and never minded it at all. She wonders why Cora has changed so much.

Cora overhears the girls and goes off into a flashback of how things used to be and the reason for the change. It turns out that her parents are to blame. They kept putting Cora down because she was not winning sports trophies as they did when they were at school. Dad is particularly cruel: “Cora couldn’t beat a team of infants in a spoon and egg race!” he snarls as he prepares to throw his prized trophies into the loft because “now they remind me of something you’ll never do – win!” Cora puts them back, begging her father to give her more time.

To stop her parents’ meanness, Cora resolves to win a trophy of her own. At least she has been told she has what it takes to be a strong sports competitor and just needs to try harder. So she begins to do so, and she makes it to the school swimming team. But does this impress her parents? It should, but Dad just says, “Team hard-up then? You might be taking part, but you won’t be winning, will you?” Evidently, only winning a trophy will win their respect.

But Cora soon finds even that’s not enough for her parents. When she wins her very first trophy, from the swimming, Dad just sneers at it because it’s not a big one. Realising she has to win something bigger, Cora joins an athletics club on top of her swimming club. There she wins an impressive cup, but Dad is still sneering: “Little and large! I can’t imagine you ever winning another cup! Ha, ha!” Cora gets so angry at her father’s nasty remarks that she goes on a full-scale crazy cup-winning binge to win any cup she can get so she will have even more cups than her parents combined.

So now winning cups and her parents’ respect is all Cora can think about now and that’s the only reason she competes in any sports event. She has no team spirit and does not care about her athletics club, swimming club or the sports team, or helping them to win any events. One girl leaves the athletics club because Cora’s cup-winning obsession is not giving others a chance. She also neglects her friends and does not care for them now, and soon her best friend Sheila is the only friend she has left. Cora grows increasingly unpopular all around, with a reputation as a selfish glory-seeker who only cares about winning trophies. Cora, who once didn’t mind losing, can’t bear the thought of doing so now. Her motto is “Cora Can’t Lose” because she genuinely believes she cannot lose. Moreover, her parents are taking such pride in Cora’s victories that they are spoiling her like never before, so Cora thinks everything’s perfect.

Or so Cora thinks. Her cup-winning obsession is reaching far more dangerous levels than unpopularity. During a sports trial she falls and takes a blow to her head. Her crazy obsession manifests itself again when she says she is upset about having lost the event, not about her injured head. She refuses to be driven down to the hospital to get it checked out, but later that evening she collapses. When she wakes up in hospital, she runs off because she is more concerned about missing out on sports practice than anything being wrong with her (which she thinks there isn’t). However, there is indeed something very wrong with Cora: her X-ray shows she damaged her skull and she is living on borrowed time until she has an operation. But the hospital can’t tell her because she’s gone and they have no clue as to her identity. They can only hope “the young idiot” will return once she gets the danger signals of noises in her head and vision problems.

However, the hospital staff do not realise just how much a “young idiot” Cora is. She is so obsessed with winning trophies that she ignores these danger signals or puts them down to minor things such as nerves. Her obsession gets even worse when she hears about the Victory Cup and how even her mother failed to win it (which can only be done by winning every running event at the inter-school event, including the cross-country event). So naturally Cora is riveted on winning the Victory Cup because it would win her the ultimate respect from her parents.

Cora’s head and vision problems grow worse and worse, although they don’t play up all the time. Even cup-obsessed Cora can’t ignore them when she suffers temporary blindness. Eventually Cora decides to go back to the hospital – but only after she wins the Victory Cup. Cora even disregards an identikit the hospital issues in order to find her. Winning the Victory Cup is all that matters to her. She does not stop to think that if the hospital is having an identikit of her being broadcast on television, there can only be a serious reason for it.

Cora’s last friend in school, Sheila, is getting suspicious and worried about these disconcerting health problems she has noticed about Cora. But when Sheila tries to tell the sports mistress, Cora has the teacher believing that Sheila is just jealous. After this, Sheila finishes with Cora too.

At first everything goes smoothly, with Cora winning running cup after running cup, although nobody but her parents cheers for her. But at the second-to-last event, Cora’s head problems act up big time, and she thinks they might have unwittingly caused her to spike her main rival. But she just carries on, as winning is all that matters to her.

As the first episode shows, Cora is not disqualified because of this. She wins all running events on the field and only has the cross country to win before she claims the Victory Cup. But this is all that is known about the resolution of the story. The final episode never got published because of an IPC strike that lasted for weeks. By the time it was settled, they did not resume Tammy. The reason was that Tammy had been due for cancellation and merge into Girl II in August, but then the strike intervened in June. After the strike was over, they decided not to complete the stories because it would have taken even longer to finish them. Everything was left unfinished.

Presumably everything comes full circle to Cora finishing the flashback that started in episode one. The final episode then carries on from there to whatever catches up with Cora first: the head injury or the Victory Cup. Or maybe they both hit at the same time e.g. Cora collapses from her injury just as she crosses the finishing line.

It can be safely assumed that Cora receives the operation in the nick of time, but it is an extremely near thing. The Street parents are humbled and ashamed at how they nearly killed their own daughter with their pride, arrogance and bullying. If Cora resumes her sporting career, it may also be assumed that the old and new Coras blend together to become a strong competitor who can take losing gracefully when the occasion arises, is fairer to fellow competitors, and patches things up with her friends.

Even now, former Tammy readers are still left dangling on the penultimate episode and hope the question of what happened in the missing final episode will be answered one way or other. “Cora Can’t Lose” has gained infamy because of her final episode being cut off by the strike when so many Tammy readers (including me) were on the edge of their seats, and just dying to see whether Cora would win the Victory Cup or if the head injury would finally catch up and put her back in hospital first. Currently the best hope of an answer is Rebellion, which has already recovered and published lost material from Scream!, which got cut off in a similar manner to Tammy.

If anyone can provide information about the lost final episode, please do so! We would just love to know, even after all this time.

“Winning is not everything” as the saying goes, and this story is a warning note about what can happen when you become obsessed with winning. However, the warning is not for glory-seekers like Yvonne Berridge in “Curtain of Silence” but for egoistical parents who keep driving children to win at all costs, including the children’s own welfare. There are so many real-life parents like the Street parents who are too demanding, keep pushing their children to win all the time, and are mean to them when they don’t win. It is also a lesson in hubris, and how terrible the consequences of hubris can be.

Even though Cora’s obsession with winning cups is selfish, irritating and dangerously irresponsible, she remains a sympathetic character because we know who’s responsible – those parents of hers who keep putting her down, just because she’s not winning anything like they did. They don’t even appreciate it when she does start winning. They show no consideration for Cora’s feelings or that they are hurting her with their sarcastic remarks. She just has to feed their egos more and more in order to stop their sneering once and for all. She’s not winning trophies for the sake of glory and ego but to earn respect from her parents and stop their mean criticisms. And it is their fault her life is in danger because of her cup obsession, as they are the ones who drove her into it.

Winning turns into a reckless obsession that has Cora grabbing trophies to the exclusion of all else. Cora not only loses all trace of common sense but also all sense of caring about others, sportsmanship and team spirit. She does not even care how unpopular she has become because of her conduct. For this reason she is heading for a serious fall and she does deserve one, though what started it all still makes her a sympathetic character. Cora’s fall is coming through the head injury she is neglecting in the name of the Victory Cup and her parents’ respect. Hopefully, there will still be an answer as to how Cora’s fall actually unfolds and whether or not it stops her winning the Victory Cup.