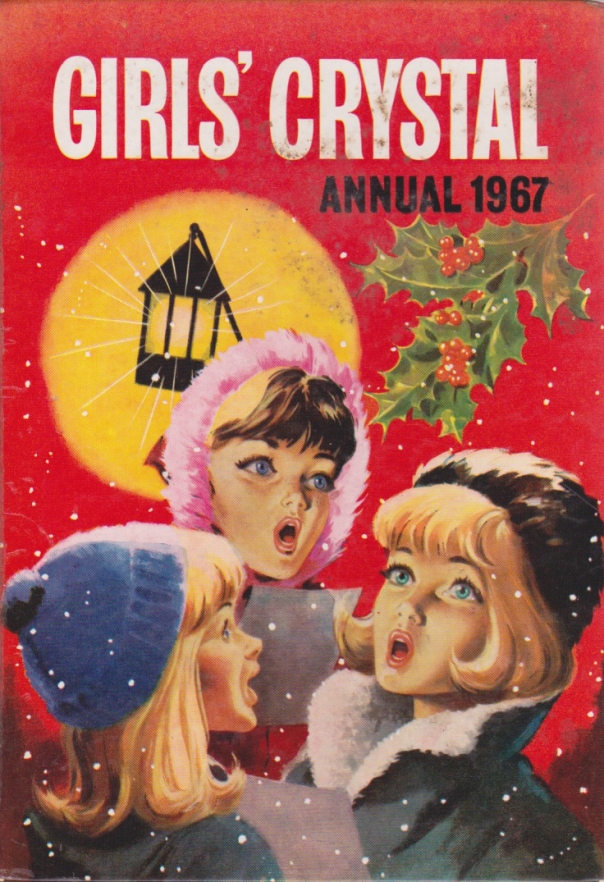 Before Jinty, Tammy or even Bunty, there was the Girls’ Crystal (originally called The Crystal for the first nine issues). The Girls’ Crystal began on 28 October 1935 and was published by the Amalgamated Press and later Fleetway. It was published as a story paper but was reworked as a comic on 21 March 1953, and so it continued until 18 May 1963, when it merged with School Friend.

More information on the Girl’s Crystal and its annuals can be found here.

In its heyday, a major attraction of the Girls Crystal annual was the Noel Raymond series, written by Ronald Fleming under the pseudonym of Peter Langley. At the time it was almost unheard of for a male writer to write under a pseudonym in the girls’ papers. The Noel Raymond series was also unusual for using a male lead in a paper where the leads were exclusively female. But this annual appeared in 1967, 14 years after Girls’ Crystal disappeared into School Friend, so it is likely the annual was falling on reprints. “Expelled!” looks like a reprint from Girls’ Crystal. I could be wrong, but it looks like the story has been retitled.

The annual is a very good read and still bears up pretty well. It has 159 pages, so there is plenty of reading, and gives scope for reprints of two serials. “Pepita on the Road” is an early Robert MacGillivray. Pepita is an Italian girl who runs a puppet show. Then a volcanic eruption devastates the village and Pepita answers the call for funds to rebuild it by hitting the road to help raise money with her puppets. In “Expelled!”, Pauline Kane is wrongly expelled (as you might have guessed) and is determined to clear her name. Her determination takes her to the lengths of shacking up in a shabby backstreet boarding house instead of going home while trying to work out who framed her. Pauline gets a horrible shock when the trail leads to her own sports teacher, who even resorts to kidnapping her once Pauline rumbles her. And there seems to be a link between the teacher’s animosity and Pauline’s father, who is a famous lawyer. Pauline tells her story in her own words; unfortunately her dialogue comes across as formal and old fashioned when read today. All the same, “Expelled!” is one of my favourite stories in this annual. If anyone can provide information on when Pauline’s story originally appeared and what the original title was, if any, I will be pleased to hear it.

There are shorter picture stories as well. In “Caught in the Act!”, it is a delight to see two female magicians as the leads, who perform a popular disappearing act. They are forced to reveal the secret to the reader after partly using it to foil a robbery, but don’t worry ladies, I won’t repeat it here! “Jimmy in a Jam” is about a little brother who likes to help, but he always ends up as the one needing help. However, the jam he gets into is not due to klutiziness, but to a silly woman who is not looking after her dogs correctly, so Jimmy and the ex-gardener have to resort to drastic measures to ensure one of the dogs gets proper vet care. And it wouldn’t be complete without a ballet story, which we get with “When Fame Came to Fay”. Fay gets her chance of fame in the ballet show after the lead walks out. But when Fay learns the show needs the original lead if it is to really succeed, she has to choose between the show and her own opportunity.

Of course there are text stories too. Among them: a Mam’selle X story, a Christmas story for the Christmas season when it was published, and a castaway story with a mystery attached. One of the more striking text stories is “The Last Empress”, which tells us how a Chinese girl named Orchid was chosen to be one of Emperor’s wives. To be chosen was her dearest wish, but little did Orchid know that from there she would ultimately rise to become Empress Tzu Hsi, the last empress of China, and become even more powerful than the Emperor himself. The feature “Silkworm Wonder”, on Chinese silkmaking, ties in with the Chinese theme of this story.

Legends and fairy tales also make their way in here. There is no happily ever after for “The Silly Princess”, a retelling of “The Swineherd”, when her handsome prince decides she is not fit to marry him after she arrogantly rejects his gifts because they are natural but falls over him when he disguises himself as a swineherd and offers her a trinket. “The Girl in the Moon” tells us how anyone Diana fell in love with was doomed to misfortune because of her vow of chastity leads to difficult choices between her principles and her feelings. And the “Witch on the Rock” is not a witch but the legendary siren of the Rhine, Lorelei.