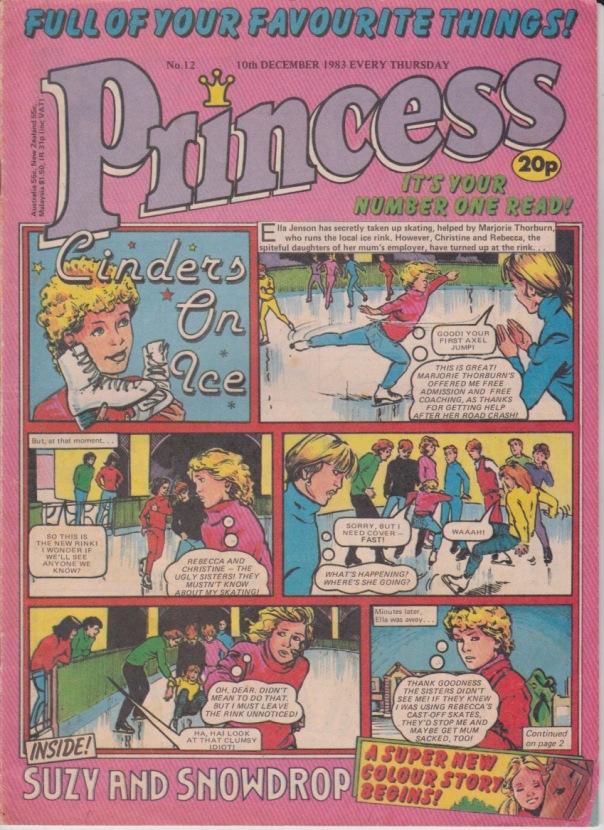 “Cinders on Ice” is the cover story this week. I can’t identify the artist. If anyone can from the cover above, it would be most appreciated. Ella is progressing so well at secret skating that she is going to take part in an ice panto. It’s “Cinderella on Ice”, and guess who’s got the role of Cinderella? Then disaster strikes when Mum unwittingly throws out Ella’s skates, and the dustman has just arrived.

“Mr Evans the Talking Rabbit”, the last remaining story from the first Princess lineup, comes to an end. They finally get the magic right and free Mr Evans from the spell that had turned him into a rabbit. After that the other loose ends get tied up for a completely happy ending – except when Mr Evans is served salad for hospital food, just when he thought he’d finally got away from lettuce. Its replacement next week is a ballet story, and it’s about time Princess had one too.

Princess starts a horse story this week, and it’s about time she had one of those too. Suzy Crandall returns from school camp to an unpleasant surprise – her favourite horse Snowdrop has been sold. When Suzy tracks Snowdrop down she finds he is being forced upon a terrified girl who is being forced to ride by her demanding aunt.

In the final episode of “Atchoo!”, Jenny has resorted to disguising herself as Hannah Hyde for the sake of her classmates after losing the power to actually change into Hannah. This leads to valuable and surprising lessons in self-confidence for Jenny, and she also gains friends and respect after they discover the disguise and assume Hannah was Jenny in disguise all along. Well, it’s not too far from the truth when you think about it.

In “True Friends for Tansy”, even Dad is getting sick of the deception he is putting Tansy through, but he is still not ready to let Tansy tell her friends whose daughter she is. Now those friends want to attend one of his concerts, which they end up doing by trying to sneak in – but security guards catch them.

Carrie and Alice finally manage to escape from the train – only to find the kidnappers right behind them!

Sadie and Cook have to be extra-nice to Grovel – nurse’s orders after he has too many accidents, which come from being the resident comic villain. But their uncharacteristic kindness takes Grovel so much by surprise that he faints, so the nurse has to *groan* tend to him yet again.