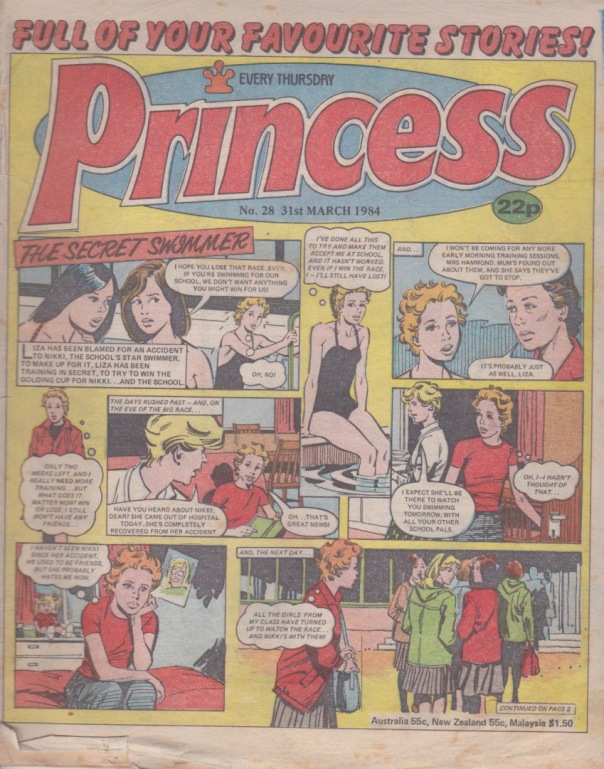 This is the very last issue of Princess. She came to an end after 28 issues and a disturbing change of format from Girl II style to Tammy style with #19, and an equally disturbing fallback on reprints of older material. 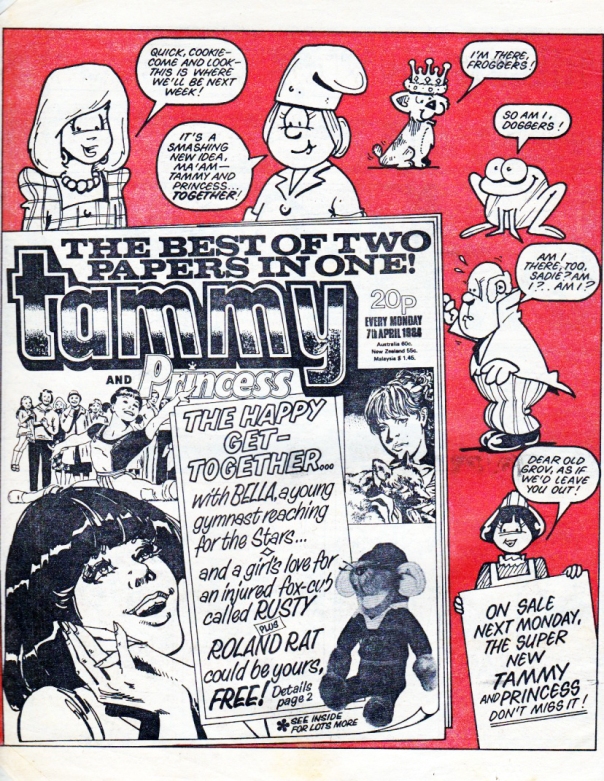 The Princess stories that do not carry on into the merger are “The Secret Swimmer”, “The Dream House” (Tammy reprint), “Horse from the Sea” (Jinty reprint) and “The Haunted Station”. The last two are given six page spreads to help finish them off.

The ending of “The Secret Swimmer” is a good one that avoids clichés, and is worthy of Jinty. Liza wonders if there is any point in winning the race because all the girls are against her as they wrongly blame her for Nikki’s accident. But when Nikki herself starts cheering for Liza, the girls turn around and start cheering as well. It gives Liza all the encouragement she needs to really compete – yet she still does not win. She is narrowly beaten, but she’s still a winner because she has friends again.

In “The Haunted Station” the Grices think pushing Helen off the cliff means her inheritance is now in their pocket. They don’t realise a tree root has broken her fall, and Wendy and Linda pull her up. Helen goes on to get help from an old housekeeper, Mrs Burke, but Linda and Wendy are whisked back to their own time before they find out how things turned out. Then, at the next stop on the school trip they are surprised to meet Helen Mills, now an old lady who runs a Tudor Tea Gardens attraction. Yes, everything worked out happily for Helen and justice was done. The elderly Helen is very surprised at how Wendy and Linda look so much like her two helpers.

The two schemers in “Horse from the Sea” come to an even stickier end than the Grices – they get drowned during a flood, and the rightful heir is free from their power.

“The Dream House” turns out to be the result of Miss Royd’s quest for immortality that she had begun centuries before, and she uses the minds of small children to wield her power. Jane manages to turn that power against Miss Royd and re-imprison her in her secret room in the dollhouse. But all it needs to turn Miss Royd loose again is for another small child to find that secret room in the dollhouse…

The stories that continue with the merger are “Day and Knight”, “Stefa’s Heart of Stone” and “Sadie in Waiting”. Sharon Day’s father has married Carrie Knight’s mother despite Sharon’s pleas that Carrie is a bully who makes her life a misery, and has even stolen her beloved guitar. Now the bullying is double the misery because Carrie is now living with Sharon and making her life hell at home as well as school, and Dad just won’t listen when Sharon tries to tell him. Carrie and her gang have trashed Sharon’s belongings and now Carrie’s planning a very nasty surprise for Sharon – a piece of meat in her vegetarian school lunch!

In “Stefa’s Heart of Stone” (Jinty reprint) Stefa tries to get herself expelled in order to get away from Ruth, but Ruth keeps foiling her. Meanwhile, and Stefa and her parents make the move into the council house. Stefa’s stoniness gets her on the wrong foot with the kids in the neighbourhood, who react by throwing stones at the statue Stefa models her stony heart on.

Hiding Rusty the fox from the nasty caretaker Mr Jenkins while his leg is in plaster is proving problematic. Jenkins is already suspicious and now he wants to search the flat – which is precisely where the kids have hidden Rusty.

Princess Bee says Sadie will have to go, and Sadie can’t understand what she did to get sacked when Grovel deserves it more. It turns out to be a misunderstanding – Princess Bee has chosen Sadie to be the one to go the annual servants’ conference. Poor Grovel’s in tears at not being the one, but we all know Princess Bee made the right decision.