I am going to try limiting myself to a maximum of one sentence for each story (particularly focusing on serials) otherwise I fear that I will never get through the pile of Sandies, even though it was a relatively short-lived title. I aim to revisit the serials later in the format of story posts (as we do for stories printed in Jinty and elsewhere): a sample episode, story summary, and discussion of relevant themes and points. So even if the stories are not described in much detail right now, you will get much more in later posts. 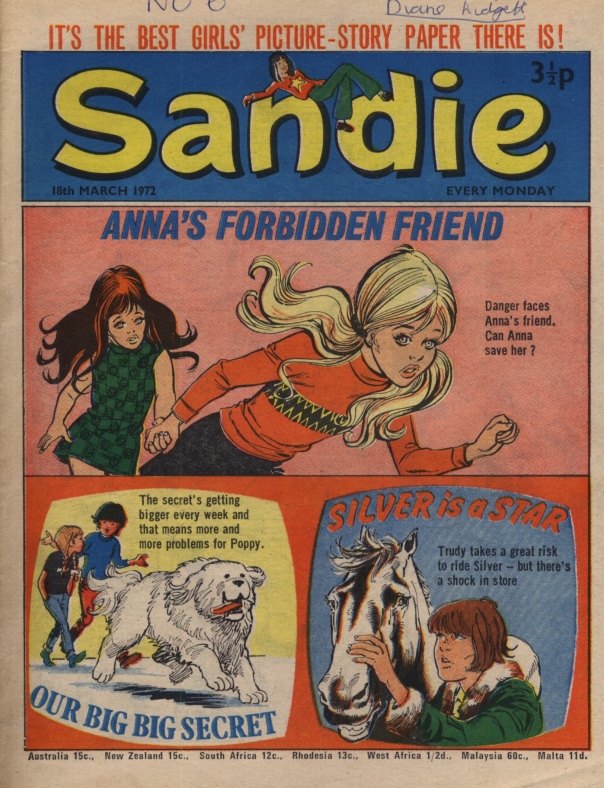 Mrs Maddox finds out some of the abuse that Norah is going through at the hands of her family: Norah is accepted into the swimming club as a non-paying member after all.

Susie Mann discovers that all the school textbooks and other material are decades out of date, and decides to do organize a fete to do something about it.

The episode of “Brenda’s Brownies” this week is particularly good: the last panel is my favourite, I think it really makes it.

Julia helps Anna escape from trouble-makers at her housing estate, but the estate itself is banding together against Anna’s father who is planning to kick them all out, so tempers are rising.

Wee Sue says she’s not that good at gym but with the help of a book she seems to master it very quickly. She seems a bit too much of a wonder girl, I must say.

Little Lady Nobody is not far from an exciting close – Elaine Moresby’s life keeps on being threatened by the associates of her evil uncle. Will she get blown up in the latest attempt?

Sandra and her sister Joan discover they have been tricked by an enemy who has been trying to separate them – they make amends and re-join forces to allow Sandra to keep dancing until Joan’s back is better.

Trudy skips detention at school in order to ride in a race, which she would have won if not for the sneaky trick of her rival, swiftly followed by the medical collapse of her mentor Mr Macready.