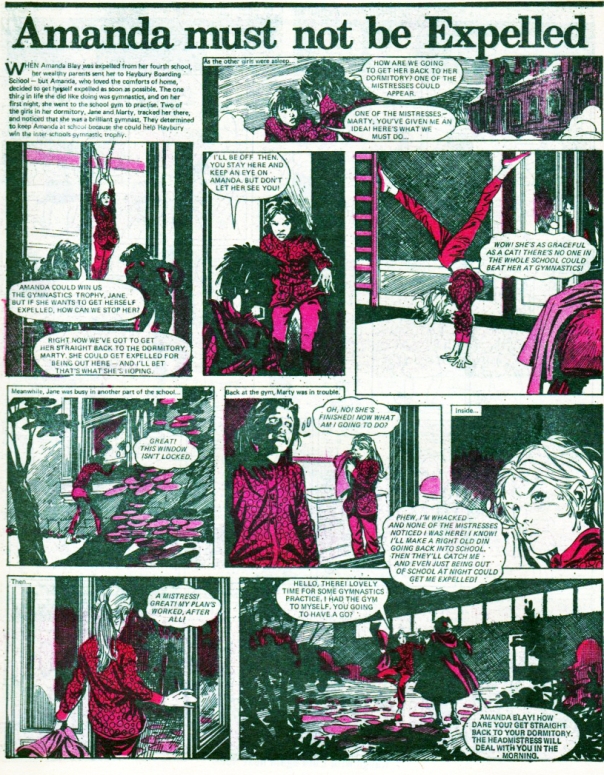 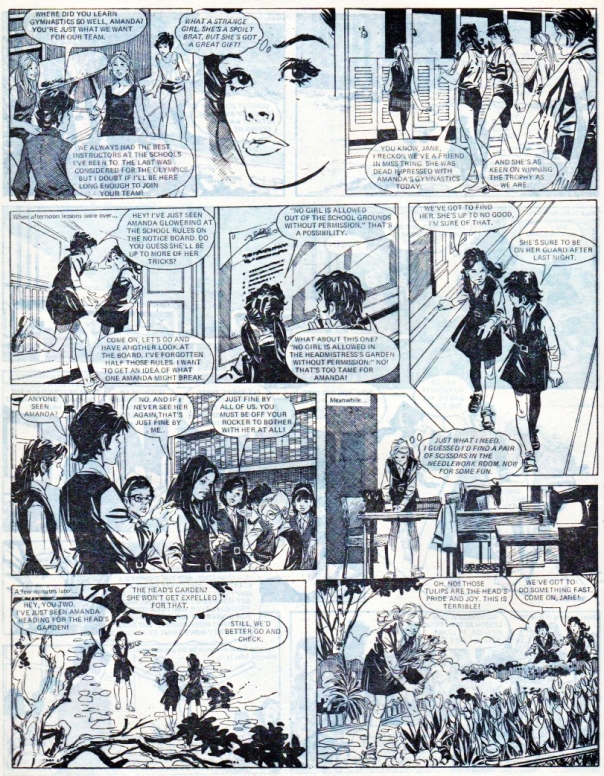 Amanda Blay has a real attitude problem. She has deliberately gotten herself expelled from every school she has attended because she wants the comforts of home. She lives for gymnastics though, and when her parents send her to Haybury Boarding School, Jane and Marty immediately spot her talent. They realise they won’t win the inter-school gymnastics trophy without her.

Amanda is tempted by the thought of winning the trophy; it would help her career in gymnastics. But she’s too selfish to do anything for the school there and has no team spirit at all. She just wants to get expelled and enjoy her home comforts.

Marty and Jane soon suspect Miss Trice (initially Tring), the games teacher, is quietly helping them there, for the same reason they don’t want Amanda expelled. Indeed, it is not long before Miss Trice is obliged to explain matters to the headmistress. Afterwards, Miss Trice tells Marty and Jane that she begins to wonder if Amanda is worth the trouble. Covering up for and foiling Amanda certainly does cause problems for Marty and Jane, including taking punishments for her. Not surprisingly, the other girls turn against Amanda because of her selfish attitude and tell Jane and Marty they are nuts to even bother with her.

Amanda is also totally selfish with her gymnastics. The school puts on a gymnastics display for parents day, but Amanda refuses to participate. As far as she is concerned, she does gymnastics to please herself, not others. Miss Trice has to persuade Amanda – with the threat of being banned from the school gym for a month if she does not take part in the display. For that, Amanda says, she’ll perform badly at the display on purpose. But when it comes, Amanda just can’t do it because she loves gymnastics too much, and does a brilliant job instead. She surprises herself so much she hates herself for it, and even refuses to accept a trophy she won for it.

But of course the girls can’t always keep Amanda from getting herself expelled, and eventually she succeeds. The girls are shattered at losing their best hope of winning the trophy. Amanda doesn’t care about that and is turning somersaults for joy that she has finally gotten expelled.

However, Amanda has reckoned without her father’s wrath.  Mr Blay is determined to really teach her a lesson this time and does something that should have been done a long time ago – he confiscates her gymnasium. And it will stay confiscated until Amanda mends her ways at school. This has the desired effect of getting Amanda to regret what she did, because gymnastics are what she lives for.

Amanda realises there is no point in being expelled because there is no gym at home now, so she better make do with the school one. She even begins to consider the trophy more seriously and agrees to join the team.

However, the other Haybury girls are not impressed at what was, it must be said, bribery to get Amanda back. In their view, Amanda deserved to be expelled and should stay expelled. So when Amanda returns they send her to Coventry. Marty and Jane stand beside Amanda, so the prefects sentence them to Coventry along with her.

Amanda is not much bothered at being in Coventry, but Marty and Jane are suffering from it more. Miss Trice sees how the Coventry business is affecting the gym team with nobody but Marty and Jane wanting Amanda there. The other gym team members boycott the team, leaving only Amanda, Marty and Jane in it. But the contest rules state there must be at least four girls in the team. And just when Amanda was starting to think of the gym team for a change! However, the staff cannot interfere with the prefects’ decision to put the girls in Coventry.

Realising it is all her fault, Amanda does something unselfish for the first time: resign from the team so Marty and Jane will be freed from Coventry and the other team members will return. She sends a letter of resignation to the head girl. Yet the head girl realises they will not have a chance without Amanda. Besides, Miss Trice refuses to enter a team without Amanda. But if the team remains at three girls, they can’t enter. Catch 2-2!

In view of the circumstances, the prefects release Amanda, Marty and Jane from Coventry. However, the other gym team members are still unforgiving and remain on boycott. Determined to win the trophy, Marty and Jane are all for carrying on training for the contest regardless and hope they get a fourth member.

Then a new girl, Liz Davis, arrives, and the girls notice something odd about her. She keeps hanging around the gym, and watching them in action all the time. Amanda even catches Liz at the gym one night. Yet when they approach Liz, she keeps running off, saying she hates gym.

One night Amanda catches Liz at the gym. To get Liz to open up, she makes a deliberately poor vault. Liz starts telling Amanda how to do it right, then demonstrates it herself. From there Liz admits she was a brilliant gymnast but lost her nerve after breaking her shoulder on the vault. Amanda helps Liz to regain her nerve and she becomes the fourth team member. Marty and Jane comment on how Amanda has really changed by helping Liz.

The Haybury team face extremely stiff competition from Oakdean, the school that has won five years running. But with Liz and Amanda on the team, Haybury wins for the very first time. The judges say they are very impressed that Haybury managed to win despite only four members in the team: “A remarkable feat, if I may say so.” Amanda is now glad Marty and Jane did not let her get herself expelled.

This was Tammy’s first gymnastics story. It came out two years before Bella Barlow, when Olga Korbut popularised the sport. Tammy published no other gymnastics story in between Amanda and Bella. But Amanda fell into obscurity while Bella is remembered as Tammy’s answer to gymnastics. It is tempting to compare Amanda with Bella, but I will refrain from doing so and concentrate on the serial itself.

Amanda definitely comes from a long line of spoiled brats who are always in trouble/get constantly expelled because their brattiness leads to difficult behaviour. Then they finally someone who prompts them to change their ways one way or other. A.D. Langholm’s “Queen Rider” is actually a novelisation of this. I suspect “Queen Rider” was based on “Bad Bella” from Tammy annual 1976, which has a very similar plot. There is a good chance “Bad Bella” was reprinted from June, and probably retitled. It could well be it was the same writer.

There is no doubt that the trouble comes from Amanda being spoiled. As always, the parents are to blame for that. They have spoiled her with so many home comforts that she gets herself expelled from boarding school all the time for no other reason that she can enjoy them again. Now that really is pathetic. Indeed, one reader wrote in to say: “…it’s a bit silly that a girl should want so much to be expelled from school. Why should she want to be expelled?”

In addition, Mrs Blay has never had the backbone to discipline her daughter. She is way too soft. Although she calls it a “disgrace” when Amanda is expelled for the fifth time, she does not come down on Amanda as she should have. In fact, she thinks her husband is being way too hard on Amanda: “maybe she just didn’t fit in at that school.” Mr Blay rightly pours scorn on that and takes the correct approach in taking a much tougher line with Amanda to get her to behave at school. However, he definitely has a snobby attitude, which he expresses when he sees Miss Trice’s car: “What a dreadful old car!” A snobby father would not have helped Amanda’s bratty behaviour much.

Marty and Jane come from a long line of unenviable girls who strive to keep a bratty (or sometimes nasty) girl from getting herself expelled. The difference is that they do it voluntarily because they need Amanda for winning the trophy. More often, such girls are lumbered with the job (blackmail, deals, etc). But Marty and Jane sure pay the price for it, especially when they are sent to Coventry because of Amanda. However, they show they are true friends to Amanda and are not just putting up with her because of the trophy. Indeed, they must have been the first friends Amanda has ever had. A selfish, spoiled brat like her would hardly have made friends at her previous schools.

Mr Blay’s new approach with Amanda (no home gym if she does not behave at school) has the desired effect of stopping Amanda getting herself expelled all the time. But this is only the first step towards reforming her. Amanda is still selfish and still has a way to go before she can redeem herself. Being sent to Coventry is the thing that snaps Amanda out of her selfishness, and it’s because she is thinking of others in how being in Coventry is affecting Marty, Jane and the team. She is also being self-sacrificing with her resignation because gymnastics mean so much to her.

It is a cruel irony that the other girls do not appreciate Amanda’s selfless act, forgive her and return to the team. Carrying on with preparing for the competition in the face of that and no fourth member becomes a sheer act of courage. Getting the fourth member is the final act of redemption for Amanda. For the first time she is helping someone, a fellow gymnast, who needs help in regaining her nerve. The remark from the judges at how impressed they are at Haybury winning despite only having four girls is the final testament to the reform and redemption of Amanda Blay.