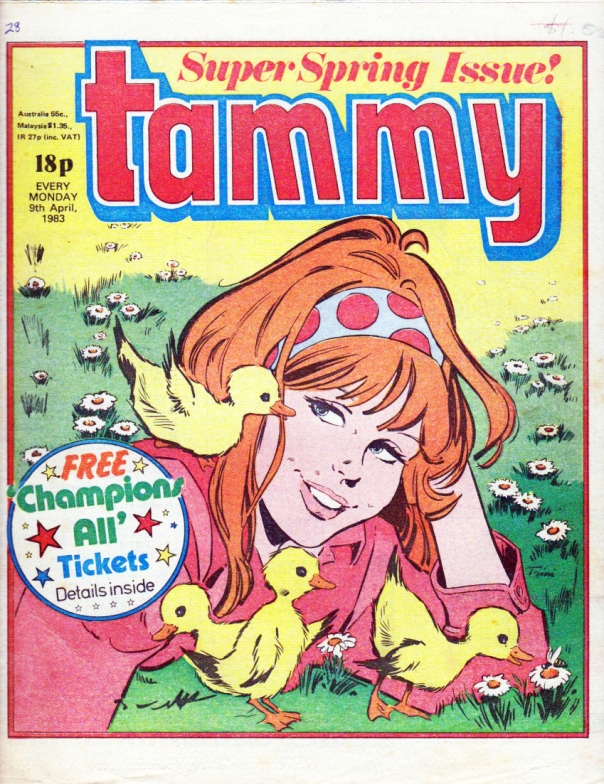 Tammy’s spring issue for 1983 immediately follows her Easter issue. It merits inclusion in our spread of Tammy Easter issues because of its colourful cheery cover, which is a very Easter-like cover with those cute little chicks and field full of daisies. It looks like one of the chicks is about to find out that bees are not for eating, though! Tammy also has a spring quiz. When she ran credits, we learnt it was Maureen Spurgeon who wrote the quizzes. She might have written Jinty’s quizzes too.

“It’s a Dog’s Life” and “E.T. Estate” are on their penultimate episodes. When Rowan runs away from the bullying with Riley, she finds the refuge she was aiming for is no longer available, and there’s nowhere else to go. Of course it is not long before the police catch up. It looks like back to the bullying for Riley and Rowan – or maybe not, as the final episode is next week. Meanwhile, other policemen are called in to investigate the goings-on at ET Estate, but the aliens quickly get rid of them with their hypnotic powers. Jenny and Dora are still tied up. Can nothing stop the aliens’ pod from reaching maturity? If it does, it will spell doom for all life on Earth, including the human race.

Abby, getting nowhere with her father over what she knows about “The Secret of Angel Smith” because he’s been led to believe it’s jealousy, decides to play Angel at her own game and act ruthless to get what she wants. Her plan is to force Dad to watch her on the trapeze and let her into the act – but then the trapeze snaps and Abby looks badly injured from the fall! Could Dad’s fears about losing Abby the way he lost his wife (from a trapeze fall) be prophetic after all?

This week’s Button Box tale is a sad, cautionary tale about seeking revenge without getting your facts straight first. So many revenge-seekers in girls’ comics have found out they had persecuted innocent people because they had misjudged them (or had been misled about them). And the girl in the tale (Ann Freeman) suffers for her error far more than they do. She has spent a whole year in shame, tears and guilt, and too ashamed to even write to the girl – her best friend – whom she had hurt so badly in her mistaken revenge. But it doesn’t sound like she has owned up or apologised to her friend, which is the first true step in the healing.

Bella discovers her Uncle Jed’s trick over the gym he had her believe he was renting for her when the gym owner finds her and kicks her out. (Oh, come on, Bella, you really should know have known better!) Sure enough, it was another of Jed’s schemes to make money out of Bella. Now there is a new mystery over the woman who owns the gym – she wears a mask. Bella is drawn back to her, and discovers the mysterious masked lady is a brilliant gymnast.

Nanny is still having problems over Barbara, who is jealous over her new baby brother because it seems that he’s stealing all attention from her. At least Nanny now fully understands the problem.

This week’s complete story is a cautionary tale about showing consideration to both animals and people. The officers of the Second Hussars do not heed Princess Elena’s advice to treat their soldiers considerately, as she does with the mascot bear that they mistreat. The soldiers mutiny in protest of their treatment, and when they take Elena prisoner, the bear repays her kindness by helping her escape.

In the new Pond Hill story, Goofy enters a film competition that requires a short documentary about your school. A film about Pond Hill? Now that sounds even more dramatic and problematic than a soap opera! Yep, it sure is. Goofy finds that even the stern Mr Gold goes gaga when he is in front of the camera!