As promised, a few notes so far on the comics conference I am attending here in Bournemouth. Julia Round is one of the key organisers and as such it was always likely to have interest for girls comics readers as her own research interest at the moment is on Misty and the gothic. Also attending, speaking, and helping to organise the event are Joan Ormrod (who is interested in British weekly publications such as Mirabelle and Roxy) and Dr Mel Gibson whose “Remembered Reading” was discussed on this blog. 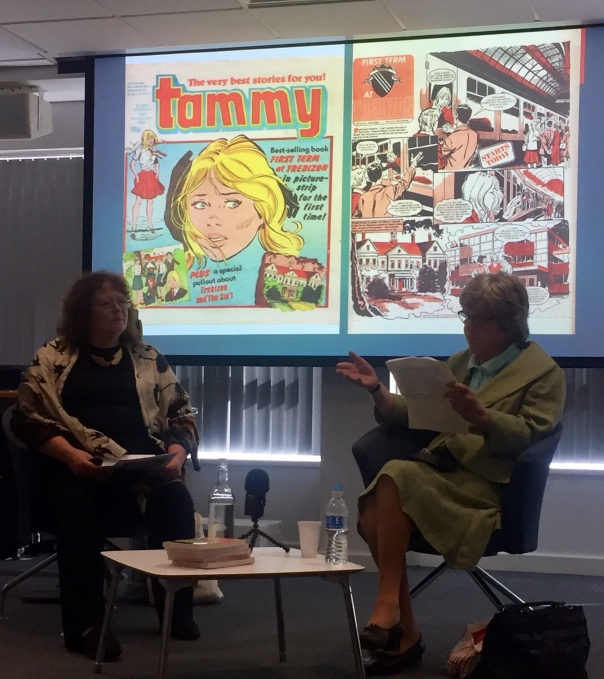 The key event on the first day of the conference was an interview session at the end of the day between Mel Gibson and Anne Digby. This was recorded by Alex Fitch (of internet radio channel Resonance FM) with the aim of transmitting it at a future date. Anne Digby talked about her start in working life, getting her first job at 16 as an editorial trainee or apprentice at Amalgamated Press in London, working on School Friend. This matched her early desire, from the age of 8 or so, to be a writer. Learning on the job and being paid to do so was right up her street. She had been a reader of comics and of School Friend itself as a child, so she was particularly thrilled from that perspective.

There was one other trainee when she joined the team, another young woman; they worked with an older lady, Isobel Winchester (corrected following confirmation with AD) who was an old hand and trained them in sub-editing tasks. In the talk, Anne didn’t go into lots of detail of what those tasks consisted of, but she did say that it included editing texts sent in by freelancers and other writers by tidying them up. Afterwards in separate conversation she also explained that it included the commissioning of work too, including the matching of artists to writers. It was very much a journalistic job, pulling together the finished creation that the reader consumes.

In case the above misleads on the prevalence of women in the comics business, Mel did ask about whether there were many other women writers or artists that worked at the time that Anne Digby was associated with the Amalgamated Press / Fleetway / IPC as it became over the years. Evelyn “Polly” Flinders, artist on the long-running girls school story “The Silent Three”, was an obvious example for her to mention; Anne had memories of her as a lovely person who didn’t look stereotypically ‘artistic’ (she wore tweeds and had her hair in a schoolma’arm bun). One interesting snippet was that Flinders was unusual in not having an agent to represent her, as the other artists generally did. (Writers did not have agent representation, but artists did.) She would turn up to deliver her art in person, carrying it in a large portfolio, so she was a regular figure to Digby. However, the number of women creative contributors engaged in producing the comics seems otherwise to have been relatively minimal.

The expectation in that job was that people would take the opportunity to do extra writing jobs on a freelance basis, and eventually transition to going completely freelance. Anne did indeed do this. She wrote text stories and comics for A.P. / Fleetway for some years, and children’s novels from the mid- to late 70s onwards. Indeed, her own take on why the comics market declined is precisely because of the rise of children’s novels at ‘pocket money’ prices – the Armada Lions and the like of the times expanded the market beyond what Puffin had done when they stood alone as the big name in children’s books.

Digby is clearly pleased with and proud of her work even at this distance in time; she has favorites that she happily cites (such as semi-supernatural story “The Dance Dream” and horse story “Olympia Jones”. This is as it should be, of course – her work was read by masses of children and stayed with those readers for a long time, and it stands up to the test of time on re-read. I hope that her wish to see “Olympia Jones” and other work re-issued will come to pass.

Further posts will follow, covering the David Roach talk in particular. However one thing I can quickly share is a photo of the script that Anne Digby brought along to the event: for a Strange Story called “The Cat”. The script was around 5 pages long but I didn’t photograph the rest of it. How lovely to see physical artifacts still around from that time, and still legible too! 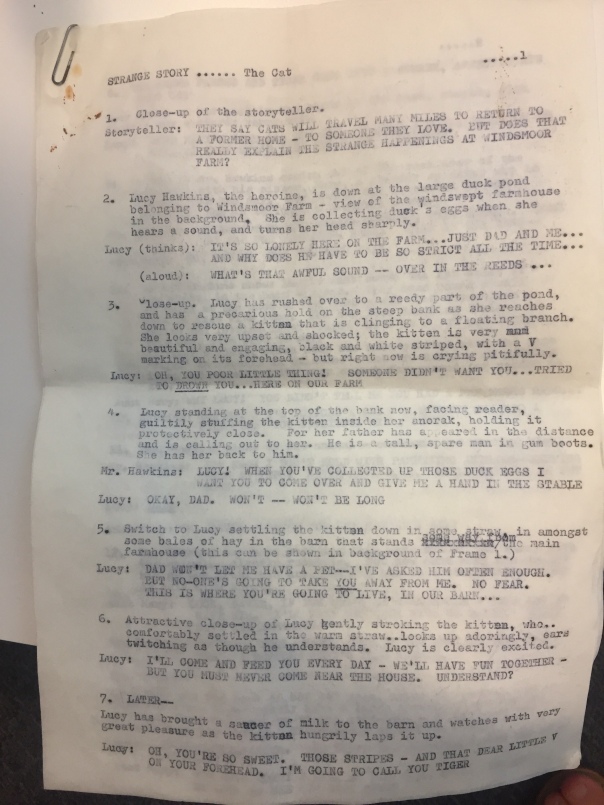