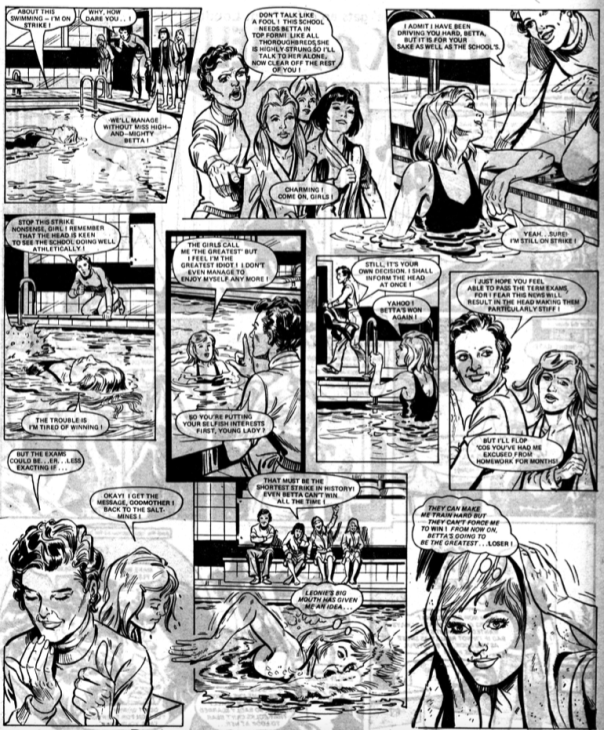 Betta James is subjected to a harsh regime to make her the top athlete of St Mary’s School: endless training, and the sports mistress Miss Pearce has no hesitation to lay on extra training sessions where she sees fit; a diet that is so strict that Bella is not even allowed a piece of her own celebratory cake; and no social life whatsoever,  with films, disco dances and even parties all banned. And the other girls are assigned as her watchdogs to see she sticks to it all. It’s nothing but sleep, eat and breathe constant sports practice to beat Deepdale all the time. Added to that, Bella’s education is suffering and she is way behind classwork because she is excused too many lessons for sports practice. But the headmistress does not care about that. All she cares about is beating Deepdale and crowing over her old school rival, who is the headmistress there. And they can’t beat Deepdale without Betta. Betta’s parents are no help either; they are just as win-crazy and beating Deepdale as Miss Pearce and the headmistress.

Betta gets fed up with this life and wants out. She tries going on strike and expressing her feelings to Miss Pearce, but Miss Pearce blackmails her out of it with a threat of extra-hard school exams, which Betta has little chance of passing because she is so behind on schoolwork. So Betta tries another tactic: deliberately losing sports matches against Deepdale in the hope she will be released from the “sports trap” as she calls it.

However, Betta soon finds that losing is not that easy when you are by nature a winner. Plus, her training has made her reflexes too strong to simply louse up. So Betta resorts to sabotage: greasing up a baton exchange; slicing studs off her shoes to lose balance; weighting her swimsuit with lead; and playing with a useless hockey stick.

With tricks like that, it is not long before beady-eyed Miss Pearce gets suspicious. But it is the ironically jealous Leonie Mather who catches Betta out when she mistakenly thinks one of Betta’s tricks was aimed at her and Betta is forced to explain the truth. She does not realise Miss Pearce and the headmistress have overheard her.

The headmistress decides to grant Betta’s wish. She drops Betta from all the teams and Leonie takes her place. However, she is furious over what she perceives as disloyalty to the school (not being able to crow over her Deepdale rival, she means!) and is out to make Betta pay for it. And when the school starts suffering extremely humiliating losses against Deepdale because they are hopeless without Betta, the headmistress’s anger towards Betta turns into downright spite.

And remember that hint Miss Pearce made to Betta about the school exams? That is precisely what the headmistress does – she makes them extra-extra-hard just to spite Betta, who has been slaving hard to catch up on her schoolwork (and because of this, has not found time for the social life she hoped for without her sports life). The headmistress even supervises the exams herself so she can gloat over Betta in person. The headmistress spites Betta even further when she tells her that she failed the maths exam, although she hasn’t even marked the paper. She just assumed Betta failed because Betta handed it in after one hour. On this basis alone the headmistress withdraws Betta from the exams and schoolwork and puts her back into sport. Hmph, more likely that’s just their excuse to start beating Deepdale again with Betta. In any case, the headmistress and Miss Pearce express delight that they are about to beat Deepdale again.

However, Betta’s form teacher Miss Johnson intervenes. She had marked Betta’s paper and says Betta scored 100%. She has always disapproved of how Betta has been made to miss so much classwork because of sport and hints that the education officer won’t approve either. She also says that Betta has exhibited near-genius in how she has caught up on schoolwork to the point where she could pass those exams.

Unfortunately this puts the idea into the headmistress’s head of beating Deepdale with brain matches instead of sports matches, and she goes “overboard” with them – “just as she did with sport”. And guess who she puts in charge of these brain matches? Yep, you guessed it. Before long, poor old Betta is right back at square one: a strict, slave-driving, nonstop training regime to beat Deepdale with no allowances for a life of her own. The only difference is that it’s “the brain drain” instead of the sports trap and with the equally bad Miss Johnson instead of Miss Pearce. This time Betta does not see any way out of it.

This was the first serial Tony Coleman drew for Tammy. From then on Coleman became a regular Tammy artist. His Tammy serials included “Maggie’s Menagerie”, “Nurse Grudge”, “Stella Stirrer”, “The Destiny Dolls” and “Spell of Fog”. Coleman’s run in Tammy ended with “Cassie’s Coach” in 1984.

There have been plenty of stories were brilliant girls start deliberately failing at things, but it’s either because they are being blackmailed into it or have been intimidated by bullies. This time the protagonist does it of her own free will because she is desperate to escape her life of sports slavery. We can see the misery that Betta is suffering because of her harsh sports regime and we worry for her future because she is missing out on too much classwork. But the people who subject her to it don’t, and Betta’s parents are just as bad. All they care about is winning, and all the headmistress cares about is beating Deepdale and lording it over her old school rival. The headmistress and sports mistress have no thought for Betta, her feelings, or her future. The headmistress has the nerve to call Betta selfish when it is she who is the selfish one in the way she treats Betta, just to constantly get one over her old rival all the time. And her conduct with the exams just to spite Betta is just inexcusable.

The headmistress is asking for a serious lesson. Unfortunately, it does not happen. And because of it, Betta ends up back where she started, only in a different form. So this is one of the less common serials that do not end happily for the protagonist. The only way to give it a really happy ending is for the adults in the story to wake up to how miserable they have made Betta in the name of winning and beating Deepdale. That, or have fate intervene and put Betta out of sports events altogether without the headmistress holding a grudge against her.

The story is certainly making a serious statement on how many real-life schools make their sports stars suffer academically and socially the way Betta does by ruling their lives with too much sports practice in the name of winning. We sympathise with Betta all the more because there are so many school sports stars like her.

What makes Betta even more sympathetic is her dialogue, which has a more witty way of expressing things, even in her miserable moments, than protagonists usually do. For example: “Bang goes my freedom bid! Now I’ll probably get ten years of sport without remission!”, “Ignore [Leonie]! Stay losing, kid! Stay losing!” and “Missing swimming’s no punishment for me! I spent so much in that darned pool I started to grow gills!” In so doing, Betta provides the only streaks of humour in the story. We also admire Betta for her ironic determination to win – in terms of beating the sports trap and not giving the headmistress the satisfaction of seeing her fail the extra-hard exams. The same determination must have also applied to her sports once before the harsh training made her lose all enjoyment with sport and winning at it.

So many girls’ serials carry the moral that winning is not everything. The moral comes from Betta herself, who constantly thinks, “Would the world have ended if we’d lost?” or something similar while everyone else at St Mary’s is ecstatic about beating Deepdale yet again. For Betta there is no satisfaction in winning against Deepdale anymore because of the price she is forced to pay for it. Sadly, nobody else in the serial learns that lesson and they remain as bad as ever.