Story: Land of No Tears

“If you want a vision of the future, imagine a boot stamping on a human face – forever” said George Orwell. Or you can look at Perfecta, and how and why she turned out the way she has.

Perfecta is the human face the boot is stamping on in the Land of No Tears. It has stamped all hope of humanity out of her and she sums up everything that is the Land of No Tears: cruel, merciless and devoid of all love and tenderness that is frowned upon in a world where all emotion is suppressed and conditioned out of people. She expresses it in the very way she walks: cold, aloof, robot-like and unfeeling. And it all started from the moment she was born. In a world where all emotion is suppressed, child-rearing practices eliminate all bonds between children and parents. Babies are nursed by robots because their mothers don’t like changing their nappies. At the age of four they are put in the Hive to be reared by the Hive Mother, who teaches them to control their emotions by locking them in cupboards and conditioning them with the mantra “feelings – bad, bad!” Physical contact with parents is banned, with imprisonment the punishment for transgression, and authorised parental visits to the Hive resemble 20th century prison visits.

Perfecta also exemplifies the arrogance of the Alpha class who believe they are superior because they meet their society’s standards of perfection, and the bullying of the people in the Gamma class, who are treated like criminals because they are ‘imperfect’. Her bullying of Gammas includes scrubbing their hands (grimy from the drudgery) until they are raw and bleeding, throwing them into freezing cold showers to teach them discipline, and threatening to break their arms. She has no mercy or compunction about doing so as she regards the Gammas as “just dirt”. Had Perfecta been born in the 20thcentury she so despised, she would have been the perfect Nazi. 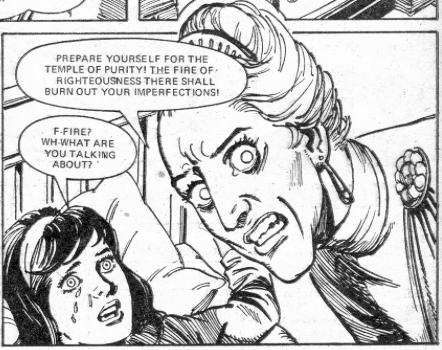 There have been hundreds of girls’ serials about cruel teachers and principals, but none can match this one for just plain bizarre and loony. Headmistress Purity Goodfellow is obsessed with perfection, which she obtains by drugging her pupils’s food until they are glazed-eyed goody-goodies who are her paragons of virtue. It’s all done with the backing of the girls’ parents and they’re absolutely delighted with what their daughters turn into, although they’re not normal kids anymore who hate homework, fool about, and adorn their bedroom walls with pop posters. The parents are totally delighted, are fully behind Purity, and thoroughly approve of what she is doing. Any pupil who begins to snap out of it (by shedding tears) is dragged off to the infirmary and force-fed the drug until she is the model of perfection again.

Purity’s school must rank as one of the most bizarre ever in girls’ comics. In line with her ideals of perfection, the school is based on Roman architecture, everything is white, and pupils are given names of a particular virtue. Emphasis is on purity and perfection and the slightest imperfection punished. Instead of teacher’s gown and mortarboard Purity wears a peculiar toga-inspired outfit and Roman headdress. It’s not just in the name of perfection; at the story’s climax it is revealed that Purity is stylising herself as an actual goddess. She has her very own Temple of Purity, complete with a giant idol of herself to be worshipped, and sacrifices (of imperfect girls) to be made to her fire of righteousness! And it doesn’t even stop there – Purity means to conquer the whole world this way, by spreading her drug through water supplies and using her pupils as apostles.

Story: The Slave of Form 3B 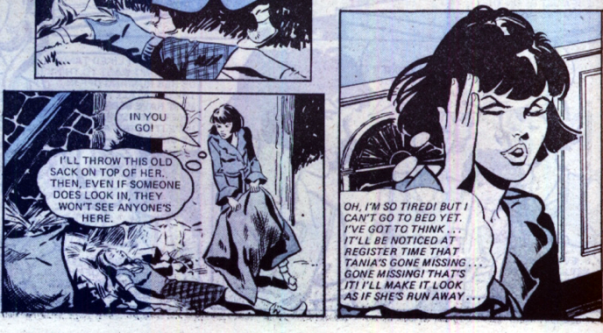 Villains who control their victims with strange powers (hypnotism, black magic, science or whatever) are a long-standing staple in girls’ comics. But few can match the depths of darkness Stacey sinks to when she discovers she can hypnotise the timid Tania. At first Stacey just uses this power to play cruel jokes on Tania, but her character grows darker and darker as she starts using the power for more sinister purposes in order to win the Girl of the Year Award. These include hypnotising Tania into cheating, sabotaging rivals and stealing, applying the hypnotism to cut Tania off from friends and avenues of help, and at one point seeming to have telepathic control over her. But Stacy hits her worst in absolute depravity and callousness when a dare she hypnotised Tania into doing for her goes badly wrong and Tania is seriously injured. Instead of getting help, Stacy hides her by dragging her into a shed and throwing a sack over her, and just leaves her there. She still doesn’t get help when she discovers Tania’s condition has worsened. All she cares about is protecting herself and getting the Girl of the Year award.

Before we get to Number 1, here are a few dishonourable mentions: 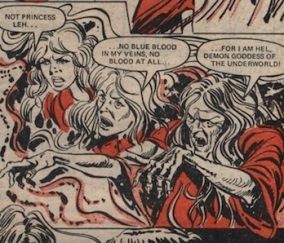 The true villain of the piece is revealed in “When Statues Walk…”, 1980.

And now, drumroll please, and turn the page for Number 1…