And here it is. A whole new logo, with even the “t” in lowercase. As with the former logo the slant is straight, but with a curious reverse slant in the m’s to make it stand out more. This is the logo that would remain until Tammy’s final issue two years later. The logo box is gone, so the logo is incorporated into the top of the cover contents once again. The cover style leading off the new look is an advertisement of freebies and two girls reading through the new style Tammy. But that is no imaginary drawing – it is a drawn version of an actual photograph (which appears inside) of two Tammy readers reading through the new-look Tammy and giving their verdict: “They loved it.” 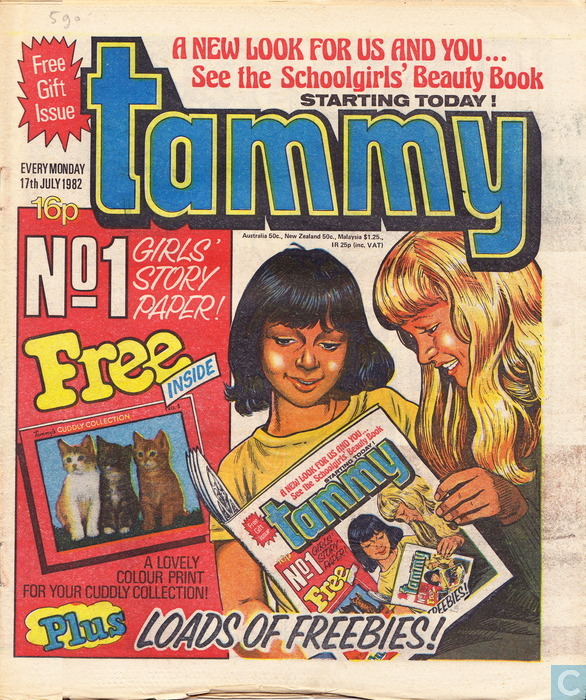 Up until the Princess II merger on 7 April 1984 the new look Tammy did not stick with a particular style of cover as she had before. It was a mix of various styles, which provided great scope for variety, imagination, and appeal to readers who preferred different types of covers over others. Some used montages of story panels, as Jinty had done from 1976 to 1980. This was a popular style, which also had the advantage of advertising the story contents inside. Some covers took one panel and did a full-blown version of it for the cover. Some used story characters for imaginary scenes, such as Pam and Co at a Halloween party. Others returned to the “pretty cover girl” style seen in Tammy’s earliest years, and this was a popular choice to advertise some competition or freebie Tammy was offering. A number of the pretty cover girl covers were drawn by Tony Coleman, Edmond Ripoll and Santiago Hernandez. 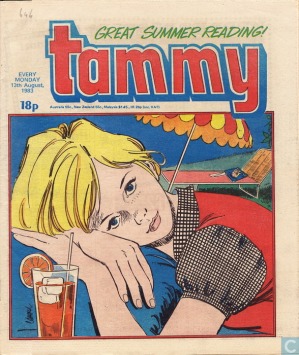 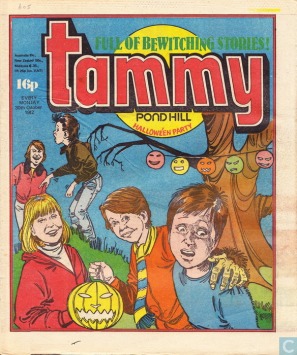 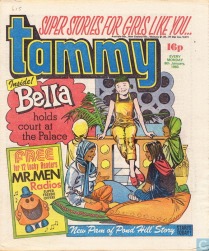 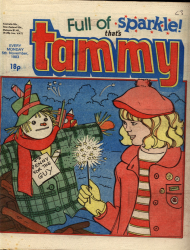 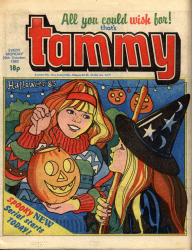 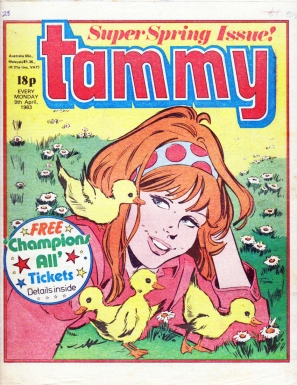 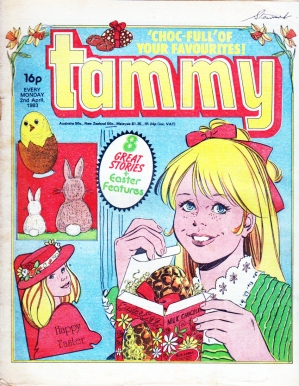 On 5 February 1983 Tammy celebrated her twelfth birthday. The cover itself is the only thing in the comic that actually observes the occasion. As Tammy had lost most of her regulars in former years (Wee Sue, Bessie, Molly) in addition to The Cover Girls, Bella does the honours on the cover. 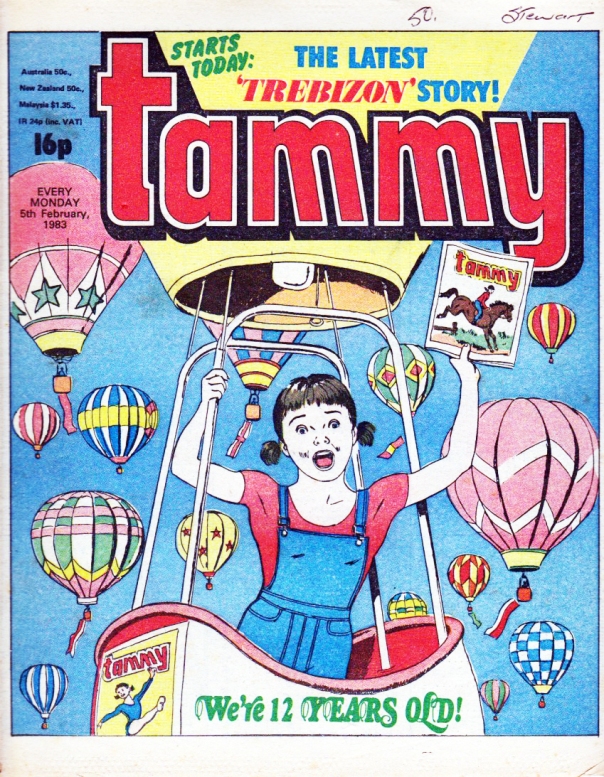 On 7 April 1984 Princess II merged into Tammy, the last title to do so. The logo’s font and style were still the same, but its colouring changed. It went from one solid colour to a rainbow, from red to blue. The only thing missing was the purple. The switch to the rainbow colouring could be connected with the Princess logo always being red. At any rate, the rainbow colouring makes the logo stand out a whole lot more because it is different to other logos that were always filled with one colour. The cover layout was a montage of panels advertising stories from both comics and an old paste-up from “Sandy – A Girl Like You” to tie in with “the happy get-together”. No merger would be complete without a competition, which is also advertised on the cover. 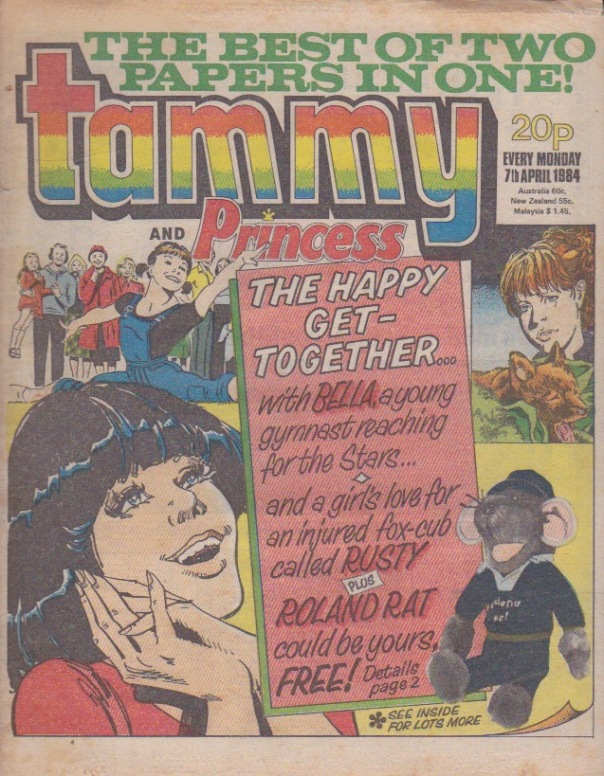 The Tammy & Princess merger only lasted 15 issues, the shortest merger Tammy had during her entire history. This is certainly unusual, but it was because she was due for cancellation herself in August. During the merger, many of the covers had an exquisite, detailed look because they often showed girls relaxing in nature scenes with flowers, fields and greenery. Sometimes these cover girls filled the whole cover. Other times they shared the cover with an inset of a panel taken from one of the picture stories while still being the ones who dominated the cover, not the stories. However, readers were still treated to a tempting panel of the contents inside. Of the merger issues, only two used a full-sized panel from a picture story, and in both cases it was The Button Box. 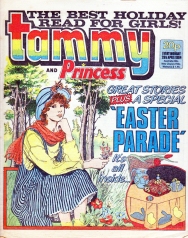 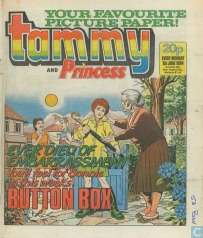 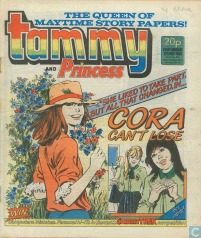 And finally, we come to the last Tammy cover ever published, on 23 June 1984. After this Tammy disappeared forever – not because of the upcoming merger but because of a long-standing strike. It left Tammy readers forever dangling on the unfinished stories inside. No doubt there were some unpublished covers too.

The last Tammy cover drops the Princess logo. The cover is in the format of a pretty cover girl picture with the inset of a story panel, a cover style that became common during the merger. 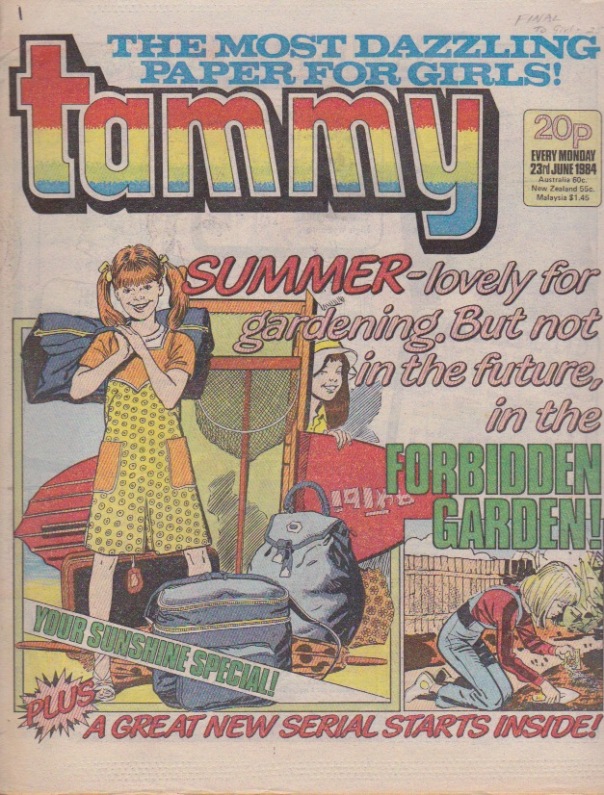 6 thoughts on “A History of Tammy Covers”