And here is the change. On 8 November 1975 Lindy merged with Jinty, the first title to do so. How did this merger affect the cover layout? The joint logos are in their own fill text box, which is coloured orange. It has no border; the fill colour is what separates it from the rest of the cover. The lettering in the Lindy logo is straight and angular, which is a contrast to the curvy letters in the Jinty logo and makes the Lindy logo look quite stiff in comparison. The background is a lighter shade of orange than the orange background colour Jinty used to have. Most likely this is to make the red Lindy logo stand out more. But not by a lot, unfortunately. The red Lindy logo does not stand out nearly as much as the yellow Jinty logo.

For the first time since #3, Jinty uses the story panel format. This makes sense as Jinty & Lindy need to advertise the two serials that begin inside, which look like they have come from the both of them. And of course the cover also advertises the competition that always accompanies a merger. The panel layout is boxy, but it is not inside the window border that has been Jinty’s format ever since the first issue. There is a border, but it is a page border that encloses the entire cover, from top to bottom. 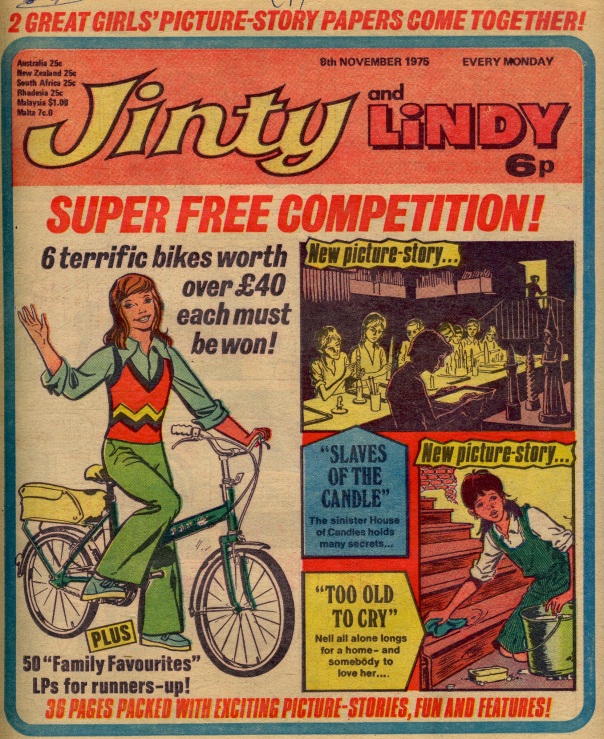 The merger continued with the boxy panel cover and page border format into 1976. The Lindy logo did not have much contrast against the orange background of the logo box. The Lindy logo looked better when the background was shaded blue. So did the Jinty logo, as using blue against yellow was making use of complementary colours. This must be why the box switched to that colour later in the merger. The blue also contrasted nicely with the deep orange page border, which made the logo box stand out more. 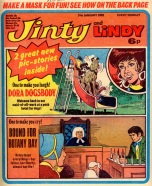 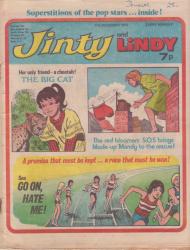 On 18 September 1976 the cover returned to the serial cover format, beginning with the first episode of “Girl in a Bubble“. Using a serial instead of a regular like The Jinx from St Jonah’s enabled bit more variety with this format, because when the serial on the cover finished, another could take it place and readers would have something new on the cover spot. Jinty & Lindy went for more dramatic stories for the cover spot, using thrills and bold story logos to pull the readers in.

From 20 November 1976 the boxy panel cover made a reappearance. 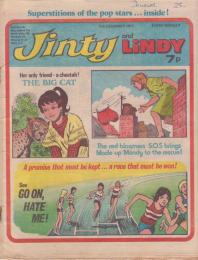 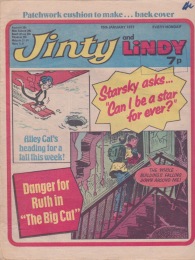 4 thoughts on “A History of Jinty Covers”