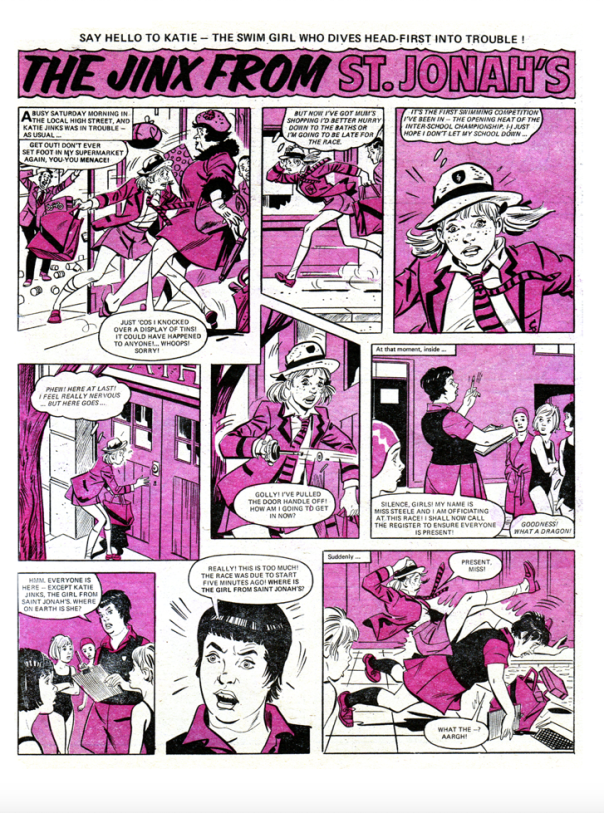 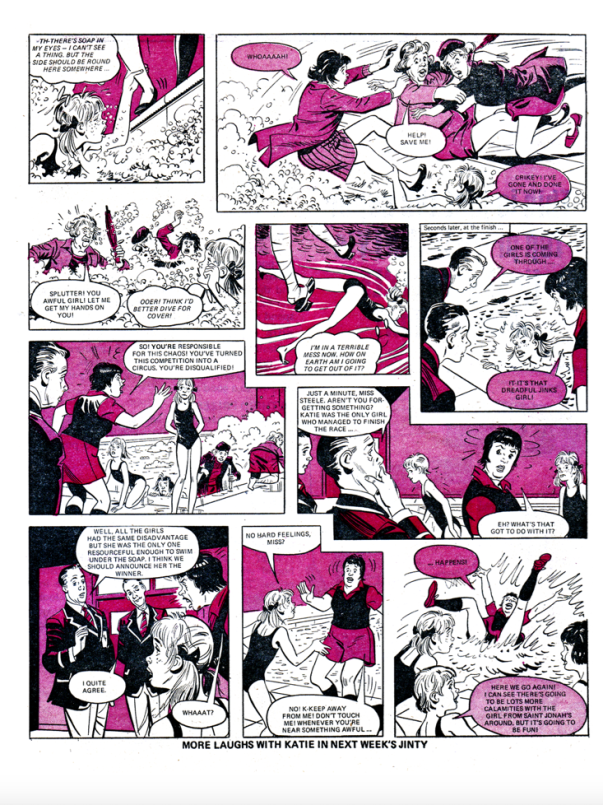 The Jinx from St Jonah’s was one of Jinty’s very first strips, and it was the longest-running at 112 episodes. It was a humour strip, full of slapstick humour and hijinks galore with Katie Jinks. It’s easy to turn that into “jinx”, and Katie is indeed a jinx by name, jinx by nature. She is a walking disaster area; even innocuous things like playing the triangle, practising yoga, or minding a goldfish lead to hilarious catastrophes in the hands of Katie the Jinx. Even the school staff have to really watch out when Katie’s about.

Though Katie’s classmates know they have to watch out for Miss Klutzy too, there are plenty of times when Katie’s jinxing works to their advantage. For example, they all get a day off school when Katie’s jinxing gets all the school staff sent home, including the headmistress. And Katie is not a jinx all the time. There are occasions when Katie does something right, such as when she figures out a girl who won’t swim has a serious problem and she sets out to unravel what it is. But the time to really watch out is when Katie wants to be helpful because that is when her jinxing is at its worst.

There are plenty of occasions when Katie’s jinxing eventually leads to a happy ending and things work out to everyone’s benefit. But of course the road getting there is full of bumps and high jinxing.

On a frequent basis it’s comeuppance time for many a wrongdoer when Katie’s around. Bullies, gluttons, stuffy teachers, snobs, troublemakers and even criminals are among the unsavoury types who get their punishment from Katie the Jinx, whether she plans it or simply jinxes it. Either way we cheer and laugh when the unpleasant type gets jinxed into their long-awaited comeuppance.

Katie comes from a long line of jinx girls in girls’ comics whose blundering causes scrapes that provide loads of laughs for the readers. “Sailor Sally – She’s All at Sea” (Debbie) and “Simple Simona” (Tammy) were other examples. But Katie was one to reach such heights of popularity in Jinty that she not only ran for two years but also became cover girl, leading off Jinty’s cover with jinx hijinks to pull readers in with a huge laugh. The panel exhibiting the jinxy gag itself, such as Katie tripping over something or getting everyone in a heap, was often given jagged edging for emphasis. Examples of Katie’s glory days on the cover are shown below. 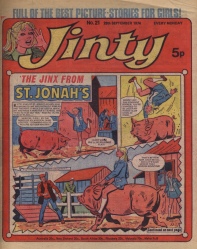 25 super “Slade” LPs to be won! See Inside. Final pages of our pull-out

Edited by comixminx to add: the strip has the power to amuse modern readers just as much. My daughter (8 at the time of writing this) loves Katie Jinks’ hijinks more than just about anything in the comic. We have recently had the pleasure of having Trini Tinturé doing a piece of art for the family, and while my son chose to have himself illustrated with one of his favourite youTubers (Dan TDM), my daughter chose to be illustrated alongside Katie Jinks. Here it is, a new piece of Trini art with a direct Jinty link!